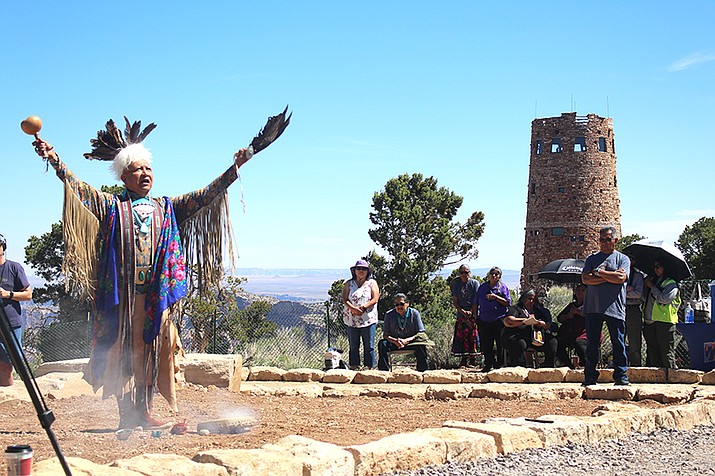 Grand Canyon celebrated the near completion of turning Desert View Watchtower into an Inter-tribal Cultural Heritage site May 17. Above: Havasupai Tribal member James Uqualla opens the event with a traditional blessing and prayer. (Joe Giddens/NHO)

GRAND CANYON, Ariz. — After more than five years of work, Grand Canyon National Park celebrated the near completion of the initial phase of turning Desert View into an Inter-tribal Cultural Heritage site May 17.

The park celebrated the opening with a ribbon cutting ceremony for the newly constructed amphitheater and a groundbreaking ceremony.

More than 150 people were in attendance, with representatives from the 11 traditionally associated tribes of the Grand Canyon. James Uqualla, from the Havasupai Tribe, opened the event with a traditional blessing and prayer.

“I am humbled today,” Uqualla said. “Simply because I am in a position that normally I would be doing this entirely in my native tongue. Though it is within these times that the native tongues are not embraced as they should be… this is a brilliant moment in the history of this the Grand Canyon. Of this the wandering grounds, the ceremonial grounds of all the tribes that inhabit both the south and north rim.” 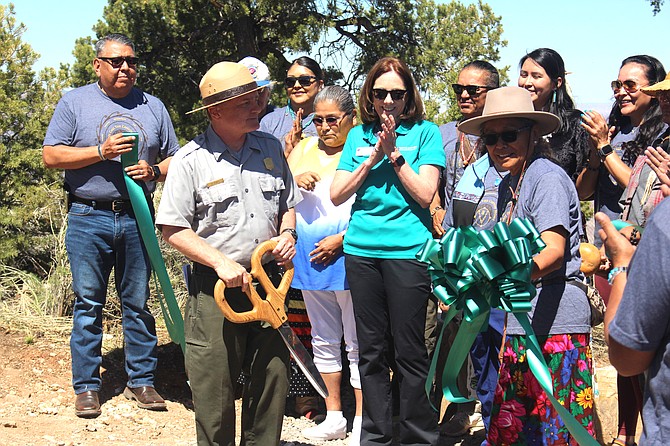 “I look forward to the day when the Grand Canyon superintendent is an Indigenous person from one of the local tribes,” Keable said.

Grand Canyon Conservancy, the parks official non-profit partner, raised more than $4 million for the Desert View project. That funding was then matched by federal funding for the Inter-tribal Cultural Heritage site, according to GCC CEO Theresa McMullan.

“This truly is an example of how a private public partnership can come together and it’s a good model for the entire park service across the country,” McMullan said.

During the event, Hopi Corn Dancers took the crowd through a celebration of their heritage.

The Inter Tribal working group will continue its efforts to develop the exhibit plan for the Desert View Welcome Center and has begun work on the next strategic plan.