U.S. to hold back Lake Powell water to protect hydropower 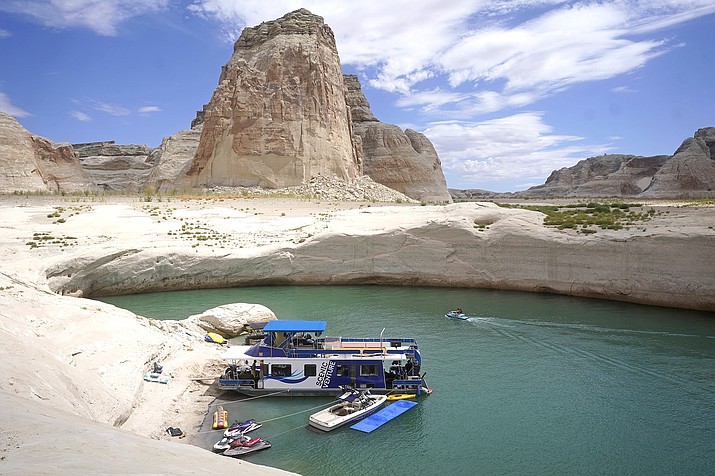 A houseboat rests in a cove at Lake Powell near Page, Arizona. Federal water officials have announced that they will keep hundreds of billions of gallons of Colorado River water inside Lake Powell instead of letting it flow downstream to southwestern states and Mexico. U.S. Assistant Secretary of Water and Science Tanya Trujillo said May 3, that the move would allow the Glen Canyon Dam to continue producing hydropower while officials strategize how to operate the dam with a lower water elevation. (AP Photo/Rick Bowmer, File)

SALT LAKE CITY (AP) — U.S. officials announced what they called extraordinary steps May 3 to keep hundreds of billions of gallons of water stored in a reservoir on the Utah-Arizona line to prevent it from shrinking more amid prolonged drought and climate change.

The U.S. Bureau of Reclamation plans to hold back about 480,000 acre-feet of water in Lake Powell to maintain Glen Canyon Dam’s ability to produce hydropower for millions of homes and businesses in the region. That’s roughly enough water to serve 1 million to 1.5 million average households annually.

Tanya Trujillo, the bureau’s assistant secretary of water and science, said keeping the water stored in the reservoir would stave off hydropower concerns for at least 12 months, giving officials time to strategize for how to operate the dam at a lower water elevation. The lake currently holds less than one-fourth of its full capacity and the dam produces electricity for about 5 million customers in seven U.S. states.

“We have never taken this step before in the Colorado River basin, but conditions we see today and the potential risks we see on the horizon demand that we take prompt action,” Trujillo said.

The decision will not have any immediate impacts on the amount of water allocated for the region’s cities. And it won’t affect farms that rely on the Colorado River, which already face mandatory cuts in central Arizona.

But it illustrates the compounding challenges facing Mexico and the seven U.S. states that rely on the Colorado River, which supplies water to about 40 million people and a $5 billion-a-year agricultural sector.

There is less water flowing through the river than is consumed by cities and farms throughout the region. And the water levels in the river’s two primary storage reservoirs, Lake Mead and Lake Powell, have plummeted substantially over the past two decades — to such an extent that boaters found a decades-old dead body in a barrel exposed May 7. 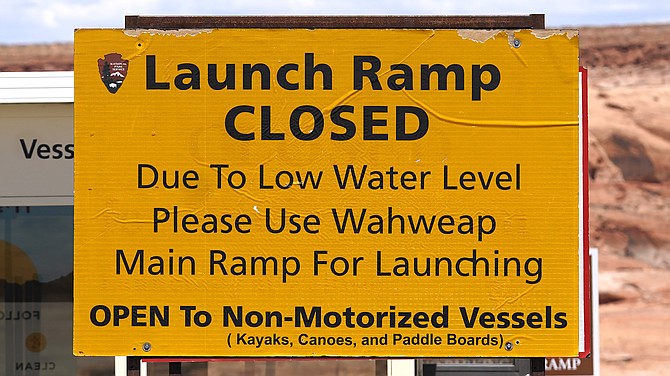 The recently announced action is one of several that have been taken to shore up Lake Powell. The Bureau of Reclamation has also ordered releases from other reservoirs upstream from Lake Powell, including 500,000 acre-feet of water from the Flaming Gorge Reservoir on the Utah-Wyoming border announced last month. Releases from Flaming Gorge as well as Blue Mesa reservoir in Colorado and the Navajo reservoir in New Mexico were ordered last year.

Shoring up Lake Powell may allow water to continue flowing through the turbines at Glen Canyon Dam and keep its hydropower-generating capacity intact, but that’s only one of several interests that officials are juggling in managing reservoir levels.

The decision injects uncertainty into the boating and recreation industries that rely on consistent reservoir levels to operate infrastructure like docks. And it forces officials to confront that without drastic conservation measures, demand for water in growing regions will likely come up against supply constraints in a hotter, drier future.

The Bureau of Reclamation announcement followed months of talks between upper basin states — Colorado, New Mexico, Utah and Wyoming — and their lower basin counterparts in Arizona, California, Nevada and Mexico, which are already taking mandatory and voluntary cuts.

Federal officials first floated the proposal last month in a letter to the seven states, which responded with a joint letter in support of the move in which they asked the bureau to adjust water accounting and how it reports lake levels when deciding on future cuts.

The request centered on the fact that keeping water stored in Lake Powell will decrease the amount of water flowing downstream to Lake Mead, the Colorado River’s other main storage reservoir.

In response to concerns that less for Lake Mead would require lower basin states to take additional cuts, the bureau agreed to act as if the water had flowed downstream in calculating Lake Mead’s elevation. That compromise alters the implementation of agreements reached over the past 15 years triggering cuts to water users in the lower basin once Lake Mead falls to certain thresholds.

It means moving forward, U.S. officials will “credit” Lake Mead and act as if the water kept to preserve Lake Powell had been delivered downstream when deciding how to enforce agreements — effectively splintering the lake’s actual levels from the levels used to determine cuts.

“We are going to account for the water as if it had been released. And we will do it in a way so that it will not trigger additional releases from the upper basin or additional layers of shortage in the lower basin,” Trujillo said.