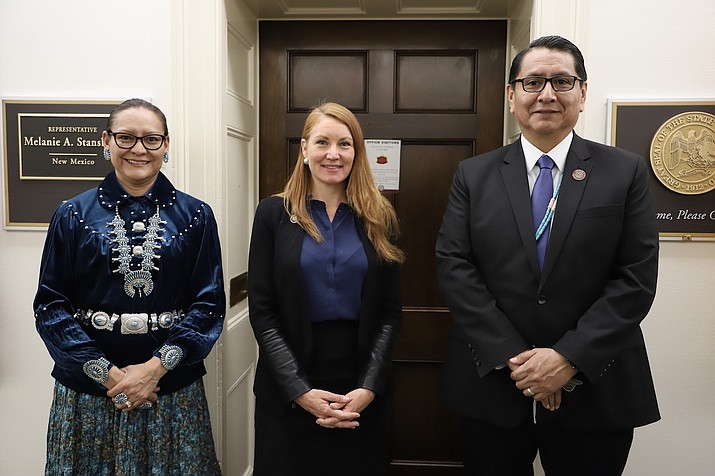 Nez spoke to the U.S. House Committee on Natural Resources Subcommittee on Water, Oceans, and Wildlife in support of the WaterSMART Access for Tribes Act and the Tribal Access to Clean Water Act.

H.R. 6238, sponsored by U.S. Rep. Melanie Stansbury (D-N.M), would give the U.S. Secretary of the Interior, the authority to waive or reduce cost-share requirements for tribal nations to implement drought and water projects under the Bureau of Reclamation’s WaterSMART program. To date, fewer than five-percent of the projects funded under WaterSMART have been led by tribes since it began.

“Current estimates show that between 9,000 and 16,000 Navajo homes do not have access to running water. Those families must haul water from filling stations around the Nation to meet their basic needs, which poses a great economic burden on families that already struggle,” Nez said. “Navajo citizens pay an estimated 67 times more for water that they haul versus water that is delivered via a municipal water system into their homes. This includes the cost of gasoline for their vehicle, for the barrels that hold the water, maintenance of vehicles, and the cost of the water itself, which depends on where they are buying the water.”

The Navajo Nation Department of Water Resources’ Water Management Branch recently applied for and was awarded two WaterSMART grants for drought resiliency projects in Oljato, UT and Cameron, Arizona, which will provide clean water access to hundreds of Navajo families. Both communities have more than 200 homes without piped water access, according to the Indian Health Service. Waiving the cost-sharing requirement for tribes would allow the Navajo Nation to secure more grants under the program.

H.R. 7632, sponsored by U.S. Rep. Joe Neguse (D-CO), will fill essential funding gaps in the bipartisan Infrastructure Investment and Jobs Act, which included significant funding for IHS’s Sanitation Facilities Construction Program, the federal EPA’s State Revolving Funds, and the Bureau of Reclamation’s rural water supply projects for tribes. After years of underfunding, more support is needed for operation and maintenance and to increase capacity to plan, design, construct and operate the water systems.

The bill would appropriate $500 million to IHS’s Sanitation Facilities Construction Program and $150 million to IHS and $90 million for the Bureau of Reclamation for technical assistance. Additional federal agencies would also receive funds to support water access projects.

Through the CARES Act and its own funding sources, the Navajo Nation has appropriated over half a billion dollars for water infrastructure projects that continue to deliver more running water to homes and communities across the Navajo Nation.

“Access to land, water, and electricity for families, government programs, public institutions, and businesses is critical to a better quality of life. Recognizing that water is integral to human health and economic development, the Navajo Nation has always placed water development as one of its highest priorities, but there is still a great need,” Nez said.

Nez said he applauded Congress and the current administration for their commitment to honoring federal trust responsibilities by making a meaningful investment in Indian Country. He also thanked the Congressional leaders and federal partners for their support.

“The two bills I have discussed would both make a significant improvement to the health and well-being of the Navajo people and Native people across the country,” Nez said. “We look forward to continuing to work with this Congress to support legislation that can support the Navajo people and other tribal communities.”