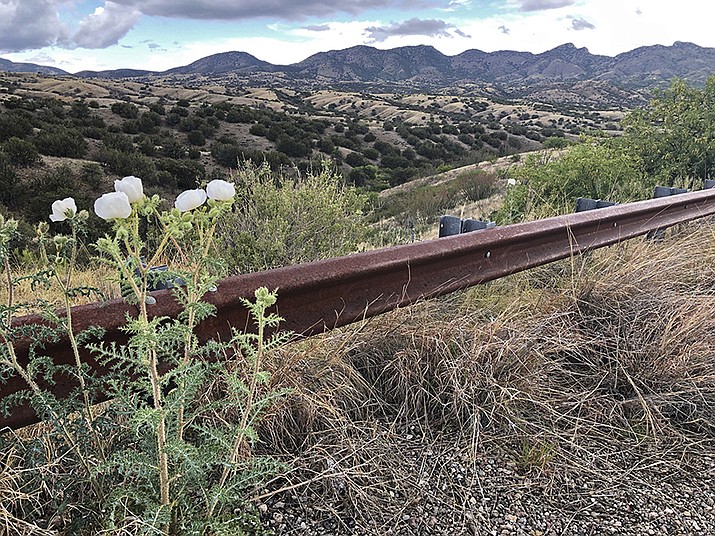 This file photo taken Monday, May 12, 2019, off Arizona scenic state Highway 83 shows the eastern slope of the Santa Rita Mountains where Canadian firm Hudbay Minerals Inc. planned an open pit copper mine. A federal appeals court May 12 blocked a bid by Rosemont Copper Co. to dig a 6,500-foot wide open pit mine at the location. (AP Photo/Anita Snow, File)

PHOENIX — A federal appeals court has blocked a bid by Rosemont Copper Co. to dig a 6,500-foot wide open pit mine about 30 miles southeast of Tucson.

In a split decision May 12, the panel said the company is free to dig the 3,000-foot hole in the ground on about 950 acres to mine more than five billion pounds of copper. Judge William Fletcher, writing for the majority, said that right to mine on the land it owns and .U.S. Forest Service land is guaranteed by federal mining law.

What the company can't do, he said, is dump the estimated 1.9 billion tons of waste rock the excavation would produce on another 2,447 acres of Forest Service land, an accumulation Fletcher said that over the 25-year life would be 700 feet deep. That pile "would occupy the land in perpetuity.''

In a prepared statement, Hudbay Minerals, parent company of Rosemont, said it was reviewing the decision. But it said it will "continue to pursue its alternate plan to advance its Copper World project,'' what it calls the Arizona operation on the part of the property it owns outright.

Thursday's ruling may not be the last word, and not just because the company — and the Forest Service which has sided with it — could seek further appeal. That's because Fletcher sent the case back to a trial judge in Tucson to determine if there is some legal way for Rosemont to acquire the rights to dump on Forest Service land.

The problem, the judge explained, is that the federal Mining Law of 1872 permits companies to use only land where they have valid mining claims for such waste.

Only thing is, such claims to use the public lands can be made only when there is evidence that valuable minerals have been found on the property.

That, however, is not the case. And the appellate judges rejected arguments by attorneys for Rosemont and the government that the company does not have to confine its waste to only the land under which there are actual mineral deposits.

Fletcher also faulted the Forest Service for issuing the permit to let Rosemont dump its waste rock on that additional 2,447 acres based on its assumption that the company's claims for the land without the minerals was valid.

The ruling is the latest in what has been a multi-year — and multi-lawsuit — bid by Rosemont to start mining on the lands on which the court said Rosemont has "undisputed mining claims.'' It would produce about 5.88 billion pounds of copper over its life, another 194 million pounds of molybdenum and 80 million ounces of silver.

The question now is whether Rosemont has options.

Attorney Allison Melton with the Center for Biological Diversity, one of the plaintiffs in the pair of lawsuits that led to the ruling, said there are elements of the federal Mining Law of 1872 that do allow mining companies to occupy land for "mill sites.''

But there are issues with that.

In general, Fletcher noted, the law limits individual mill sites to just five acres. It does, however, permit those with mining claims to stake multiple mill sites if "reasonably necessary'' for their mining operations.''

Heidi McIntosh with Earthjustice, said the amount of land that Rosemont would need to dump nearly two billion tons of waste is not what's contemplated by the law.

"What Congress did at the time was to give prospectors who were willing to go out there and try to develop mines a certain amount of land,'' she said.

"At the time, they contemplated that miners would go out and do an 1872-size mine and that the lands they would get to do that would be enough to store any kind of waste or tailings that they generated,'' McIntosh continued. "Of course, if you're talking about a mile-wide pit that Rosemont is, they've just kind of outgrown the mining law.''

Fletcher acknowledged that many people have said the 1872 law has to be upgraded.

"But amendment of the Mining Law is a task for Congress, not for the (Forest) Service, and certainly not for us,'' he wrote.

McIntosh, who represents several Native American tribes who filed their own lawsuit, said there are things that Rosemont could do and not run afoul of the law.

"They could truck off their waste,'' she said.

"They could find some private land and convince the owner to sell it to them,'' McIntosh said. "They just can't offload their problem onto the public and the tribes.''

And she said it will now be up to Rosemont and the Forest Service to make their case to U.S. District Court Judge James Soto, whose ruling the appellate court upheld, to prove they can operate their mine within the confines of the law.

"It's been our belief for many years that the Forest Service and the Bureau of Land Management have overstepped their authority when it comes to mining claims,'' he said. Featherstone said the decision proves that groups like his were right all along.

"You can't do mining activities other than exploration unless you have a valid mining claim,'' he said.

The ruling was not unanimous. Judge Danielle Forrest said she believes the Forest Service was within its rights to adopt regulations to fill in the gaps left by the Mining Law.

Even if Rosemont does find a legal spot to dump its waste, that doesn't mean the company will be able to pursue its plans.

It actually has started some construction on what it has called an alternate site. But that is now the subject of a separate lawsuit that accuses it of affecting the flow of streams.

There also is other litigation focusing on whether the mine would jeopardize threatened and endangered species and whether its construction and operation would affect critical water resources and wildlife habitat.

In a prepared statement, Ned Norris Jr., chairman of the Tohono O'odham Nation, said Thursday's ruling "further validates that Rosemont's foreign owners have neither the legal right nor the valid mining claims for their proposed plan to destroy sacred sites beneath a mountain of poisonous mine waste.'' Rosemont is owned by Hudbay Minerals Inc., which is based in Canada.