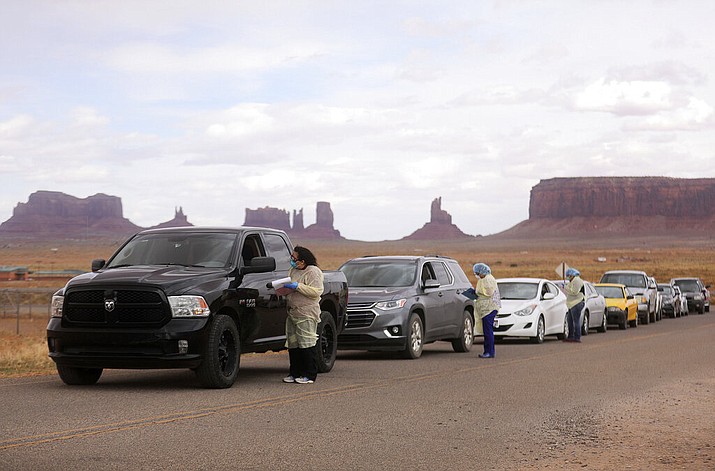 Korene Atene, a certified nursing assistant with the Monument Valley Health Center, gets information from people lined up to get tested for COVID-19 outside of the center in Oljato-Monument Valley, San Juan County, April 16, 2020. In a pandemic that has seen sharp divides between urban and rural vaccination rates nationwide, Arizona is the only state where rural vaccine rates outpaced more populated counties, according to a recent report from the U.S. Centers for Disease Control and Prevention. (Kristin Murphy/The Deseret News via AP, File)

PHOENIX (AP) — Mary Francis had no qualms about being a poster child for COVID-19 vaccinations on the Navajo Nation, once a virus hot spot. The Navajo woman's face and words grace a digital flyer asking people on the Native American reservation to get vaccinated "to protect the shidine'e (my people)."

"I was happy to put the information out there and just building that awareness and in having folks feel comfortable enough, or curious enough, to read the material," said Francis, who lives in Page, near the Utah border, and manages care packages and vaccine drives for a Navajo and Hopi relief fund.

In a pandemic that has seen sharp divides between urban and rural vaccination rates nationwide, Arizona is the only state where rural vaccine rates outpaced more populated counties, according to a recent report from the U.S. Centers for Disease Control and Prevention. Public health experts believe the trend was mainly fueled by a group that lost a disproportionate number of lives to COVID-19: Native Americans.

Tribal communities were left more vulnerable to the virus because of underlying health issues like diabetes and heart disease, as well as multiple generations sharing a home. Cases and deaths piled on despite curfews, weekend lockdowns, mask mandates and business shutdowns. By April 2020, the Navajo Nation — which encompasses parts of Arizona, New Mexico and Utah — declared it had been hit harder by the coronavirus than any other tribe.

The devastating loss, particularly of elders, drove a push for vaccinations as an act of selflessness. Holly Van Lew, co-leader of a federal Indian Health Service taskforce rolling out vaccines nationwide, credits Navajo Nation officials with constantly emphasizing that message.

"It really comes from a different perspective. Instead of 'You should get your COVID-19 vaccines too,' (it's) 'We should all as community members protect each other,'" said Lew, a clinical pharmacist at the Phoenix Indian Medical Center.

Native Americans make up significant portions of five of the seven counties designated as rural in the CDC report. A 2020 Census survey shows they account for nearly three-fourths of the 71,000 people in Apache County and almost half of the 110,000 residents in Navajo County. They are an estimated 10 to 15 percent in three smaller counties, Gila, Graham and La Paz. 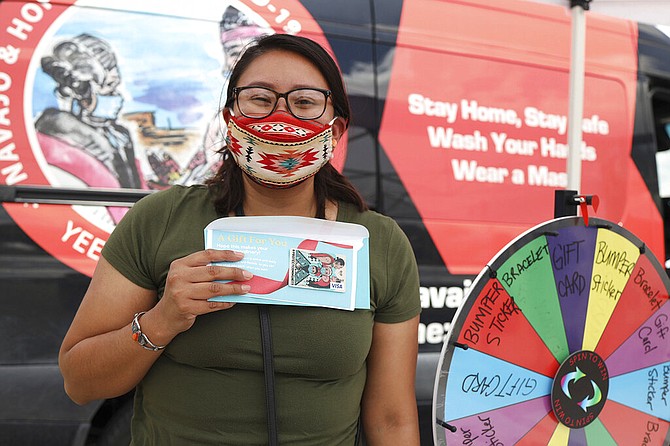 In this photo provided by The Navajo & Hopi Families COVID-19 Relief Fund, Natasha Goldtooth shows off a $25 gift certificate she won after spinning a prize wheel for people who are fully vaccinated on Aug. 21, 2021, in Window Rock, Arizona. Initially, the campaign began at local area flea markets and vaccination sites before becoming primarily virtual. Arizona is the only state where rural vaccine rates outpaced more populated counties according to a recent report from the U.S. Centers for Disease Control and Prevention. Public health experts believe the unexpected trend was mainly fueled by a group that lost a disproportionate number of lives to COVID-19: Native Americans. (Mihio Manus/The Navajo & Hopi Families COVID-19 Relief Fund via AP)

Arizona has 15 counties total. The CDC determined counties were rural if they either had no substantial "urban cluster" or one with a population between 10,000 and 50,000.

The overall percentage of people in those counties who were vaccine-eligible and got at least partly vaccinated between December 2020 and January this year was 86.1 percent. It was 69.3 percent in urban counties, the report said.

Nationally, urban counties outshone rural ones 75.4 percent to to 58.5 percent.

However, Arizona's DHS doesn't receive vaccine data from the Indian Health Service, which provides health care to more than 2.5 million Native Americans and Alaska Natives on and off tribal land.

"If I adjust data that's included in the CDC report but not on the state dashboard, then you could 100 percent say with certainty that the only reason why those rural counties were ranked higher than urban is because of tribal participation in vaccination campaigns," said Will Humble, former department director. "There's no way it could be anything else."

The two rural counties in the CDC report where Native Americans have little presence were Santa Cruz, near the U.S.-Mexico border, and Greenlee, which touches the New Mexico state line.

Santa Cruz had an extremely high vaccination rate of 146% among a population of roughly 46,000. Officials say that figure is because of laborers from Mexico as well as visitors. Seasonal workers in produce warehouses, a major industry there, got the jab through the county and University of Arizona Health Sciences-run mobile health units in border communities, said Jeff Terrell, the county's health director.

"You look at the numbers that we've put out there," Terrell said. "If you think about the vaccination sites at the border as well. If you add that into the county — yes, I think that was a contributing factor."

"One of the most important steps of regaining the health of our communities is getting a COVID-19 vaccine!" reads a quote on a poster of a smiling Begay. "I received mine and I feel great!"