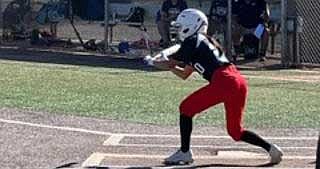 St. Michael advanced to play Superior (17-6, 7-1) on May 6 but lost that game, 3-0. It was the second consecutive year that the Lady Cardinals have fallen to Superior in the state playoffs.

The Lady Panthers beat opponents this year by an average margin of 12 runs per game.

The Cardinals typically play home games in Gallup because they are without a facility, but state playoff games must be played in Arizona. The game was played at the Window Rock High School baseball field.

“We were up against a very good club,” St. David Head Coach Yogi Wilson said. “We had some errors at bad times. But the main thing was, we just couldn’t hit. Give credit to St. Michael.”

The Cardinals jumped out to a 2-0 lead in the first inning against St. David on runs by senior Kalynn Smith and sophomore Autumn Shirley. St Michael maintained the lead for a little while longer, as the Tigers tried keep up.

Through four innings, St. David wasn’t able to get on base, thanks to the pitching of the left-handed senior Gabriella Simpson. Simpson pitched the entire game, throwing an assortment of sliders and curve balls that struck several batters.

“I always tell the team that if you get up — keep the pressure on,” Cardinals Head Coach Karen Tom said. “Keep playing hard and tough. You never know what can happen, so it’s important to keep the momentum going.”

Then came the start of the fifth inning. The Tigers’ junior Audrey Merrill hit in sophomore Anissa Jaquez and freshman Regan Haynie to tie the game at 2-2. The versatile Shirley got on base for St. Michael and stole her way to third. Senior Smith recorded an RBI, which brought Shirley home for a 3-2 Cardinals lead. Then Simpson hit in sophomore Cameron Hanley and St. Michael had found the weakness in St. David’s defense.

Simpson started at pitcher for St. Michael and recorded 12 strike outs and no walks. Of note for the Cardinals was Shirley, who scored three runs in the game and who went 3-for-4 at bat.

Jaquez started at pitcher for the Tigers and recorded seven strike outs and one walk. She also pitched the entire game.

Superior scored runs in the first and third innings of the May 6 second-round state playoff game in Globe. The runs by the Tigers were scored on RBIs by Analise Hollenbeck, Juliana Navarro and Danika Bryant.

The Cardinals had a chance in the latter innings to get on the scoreboard, but Shirley and sophomore Cameron Hanley weren’t able to get past second base.