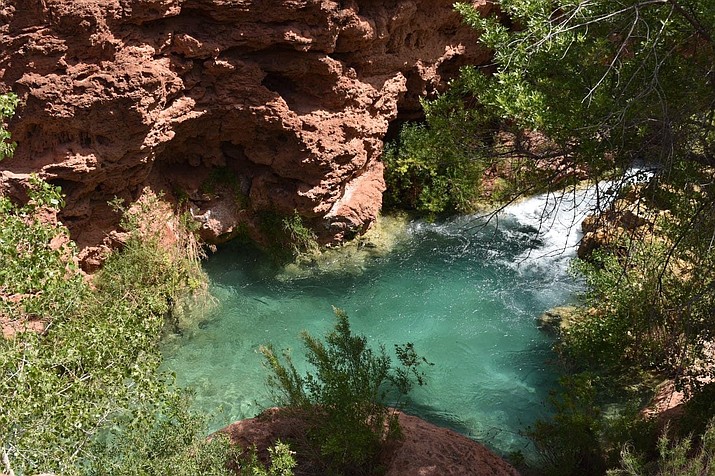 The Arizona Department of Environmental Quality approved an aquifer protection permit April 28 for a uranium mine near Grand Canyon National Park, which the Havasupai say has the potential to contaminate their only source of clean water. (Photo/via Facebook at Coral For Arizona taken on a recent trip to Supai)

FLAGSTAFF, Ariz. — Officials from Energy Fuels Resources said that environmentalists and some Arizona tribes claim that their work at a uranium mine near the Grand Canyon will contaminate underground aquifers, is unsubstantiated.

The mine, formerly Canyon Mine, now called Pinyon Plain Mine, is located about 10 miles south of Grand Canyon’s South Rim in Kaibab National Forest, and is owned by Energy Fuels Inc.

Curtis Moore, vice president of marketing and corporate development at Energy Fuels Resources, said the company was pleased with the permit approval.

Environmentalists and the Havasupai Tribe have 30 days to file an appeal.

Moore said he sees no reasonable chance for the aquifer to become contaminated because of the mining.

“We have a multitude of protections in place. We installed protections and there are natural protections. We voluntarily lined the bottom of the mine with epoxy, but the biggest protection is the 1,500 feet between the mine and the regional aquifer,” he said. “It’s very clear that there is no risk to groundwater or other health or environmental impacts,” he said. 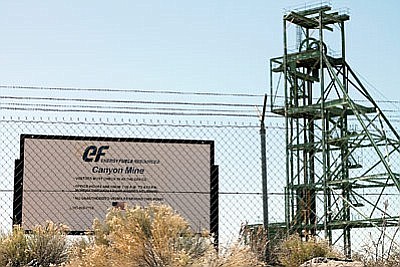 Moore said there is no history of mining pollution of the Havasupai Reservation by Energy Fuels Resources. He said it’s important to note that the U.S. Geological Survey has no documented evidence that any breccia pipe mining have contaminated groundwater at the Grand Canyon in the past 50 years.

“Our mine is further away (than other mines) and downhill so this is the most protected mine,” he said.

Yet, Taylor McKinnon of the Center for Biological Diversity, said there is no way the company or uranium industry can ensure there will be no permanent damage to Grand Canyon aquifers and springs, the only source of water for the Havasupai.

Research by the U.S. Geological Survey published in 2020, “suggests a hydrologic connection in the area of Canyon Mine” between the Coconino aquifer, which is flooding into the mine, and the deeper Redwall-Muav aquifer, which is the source of the largest springs in the Grand Canyon and Havasu Springs on the Havasupai Tribe’s land.

“This permit strenuously ignores science showing the potential for deep aquifer pollution, and in a region still plagued by seven decades of uranium industry pollution, risking more, as this permit does, is dangerous,” McKinnon said last week in an interview with the Navajo-Hopi Observer.

Moore said he has not spoken with Havasupai council members about the mine because there have been a number of lawsuits and he’s not sure what he could tell them that would help them change their views toward uranium mining.

But the Havasupai have previously stated unequivocally their opposition to the mine because of the health risks and negative impacts to their people.

“We have been on the forefront of opposition to uranium mining within our aboriginal lands for generations,” the tribe said in a letter.

The tribe pointed out that Pinyon Plain Mine sits directly above the R-Aquifer, which is the sole source of water for people across the Colorado Plateau. The blue green water that the Supai are known for comes from the snowmelt off the Peaks and the monsoon that percolates into the soil filling the aquifer. The water moves underground, past the mine site and seeps into springs on national forests on the South Rim of the Grand Canyon where it eventually reaches the Supai at the bottom of the Grand Canyon.

“This process has occurred for millennia, and our elders understood this water process and how it worked long before scientists confirmed what we already knew,” the Supai said.

Moore said he does not understand the claims that this is a case of racial environmental injustice because there is no racial component to the uranium mine.

“It is not displacing any community. A lot of activists make all kind of outlandish claims. There is no environmental impact and no risk to groundwater or air,” he said.

The Supai said that will change if any of the negative impacts come true.

“If the R-Aquifer becomes contaminated, and we must abandon our ancestral home of Supai Village, we will leave the blue-green waters of Havasu Creek behind and consequently will cease to the Havasuwa ‘Baaja,” the Supai said. “While we may still breathe air, we, the People of the Blue Green Water, will have become extinct.”

Moore said some benefits of the mine are producing carbon free energy while creating 40-50 good paying jobs during full production. He said most of the jobs in the area are tourism jobs that don’t pay well. He said another benefit is that nuclear energy will make America less dependent on Russia, which now supplies most of America’s uranium.

Moore said the world benefits from carbon free electricity and shareholders benefit from the money, which can be made off the mine.

“Native Americans can benefit if they want to be part of the solution,” he said.

Moore said he has taken his boat down the Grand Canyon three times.

“I see and understand what they are trying to protect,” he said.

Moore said if he thought that the mine would hurt the aquifer that he couldn’t work for this company.

Yet, the mine sits in the Havasupai’s Traditional Cultural Property designation of Red Butte.

“It is impossible to understate the significance that Red Butte has to the Havasupai people and other tribes in northern Arizona,” they said. “It is an origin point in the Havasupai creation story and a traditional gathering place for the Havasupai to conduct ceremonies and gather medicinal plants.”

The Supai said its Tribal members have been forced to stop visiting Red Butte and have stopped harvesting plants, including the medicinal cedar and sage, because of the evaporative spraying system on the non-storm water impoundment pond at the mine.

“This system sprays water with elevated contaminants that was removed from the mine shaft,” the Supai said.

Moore said the Pinyon Plain mine is only about 17-acres in size, which is about as small and low-impact as commercial mining gets. He also wanted to make the following points:

The 17-acre footprint that is seen today at the mine is what will be seen during mining. It won’t be bigger, Moore said. In addition, it is a small underground mine, so there will not be a big open pit or other significant disturbance.

The state of Arizona has said Pinyon Plain is the most heavily regulated conventional mine in the U.S. today.