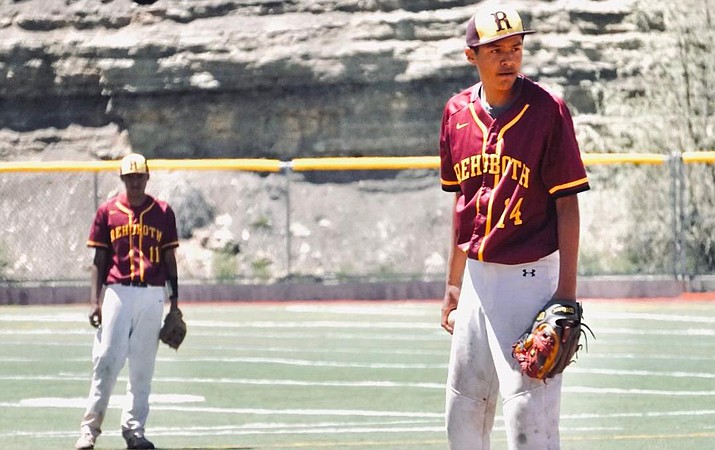 Rehoboth's Kodah Chapman is an 8th grader who plays pitcher for the Lynx. Behind Chapman is older brother Mato, a senior and second baseman on the team. (Photo/Rehoboth Christain School)

GALLUP, N.M. — Rehoboth Christian High School experienced some ups and downs April 30 in varsity doubleheader baseball games against Estancia, but came away with wins, nevertheless, — the latter game of which the Lynx gave up seven runs in the second inning.

The Lynx (20-1, 4-0) came into the game ranked No. 2 in 2A District 1. The team awaits playoff seedings, which will be released this week. Rehoboth Head Coach Anthony Sanchez said he anticipates a bye as far as an opening playoff game goes, but said the Lynx will be ready come time to play — whoever and wherever that may be“We’ve played at a high level the entire season,” Sanchez said. “We’re ready. Our record means we may get a bye, but you never know. We’ll see. We’ll be ready.”

Rehoboth won the first game of the doubleheader 5-2, and the second game by a score of 16-11. Estancia came into the game with an overall record of 10-11, 1-1, and is not playoff-bound.

The Bears got out of the blocks early in the second game, with senior Ramon Moran scoring in the first inning for a 1-0 lead. Rehoboth’s defense could’ve been better, but the Lynx picked up runs in the first inning as well, with senior Mato Chapman hitting in sophomore Raedon West. Senior Tyler Keedah hit an RBI, which brought home Chapman and freshman Morgan Arsenault.

Keedah and junior Talan Davis scored on a hit by freshman Kodah Chapman, and, for a moment, it looked like the Lynx had the game in the bag. Eighth-grader Kodah Chapman scored, as did West and Rehoboth was staring at an 8-2 lead at the end of he first.

The Bears immediately got themselves back in the game in the second inning, with sophomore Quinten Cantu picking up a run. Then, Estancia recorded a slew of hits and runs and things were looking's as though the Lynx might be in trouble of losing.

Senior Abelino Ortiz scored on an RBI by senior Eri Candelas and Lynx fans in the Ford Canyon stands looked worried about the pitching of the Lynx.

“I was never worried,” Sanchez said. “Every player has to get a feel for the game. That’s what that was.”

Estancia Head Coach Randy Archibeque said he was pleased with the Bears’ overall team play on offense. He said the second inning was phenomenal.

“We had a streak in that second inning of some really good hitting,” Archibeque said. “But we had some errors on defense.”

Rehoboth appeared unnerved by the bombardment of runs scored by Estancia in the second inning. Raedon West came home on an RBI by junior Antonio Rivas to tie the game at 11-11. Arsenault and Keedah scored on a hit by Davis and suddenly the momentum swung in favor of the Lynx.

Rehoboth picked things up on defense and recorded a double play with Mato Chapman getting the ball to first base just in time in the fourth inning. Both teams were scoreless in the fourth inning and at that point it looked as though anybody might win the game.