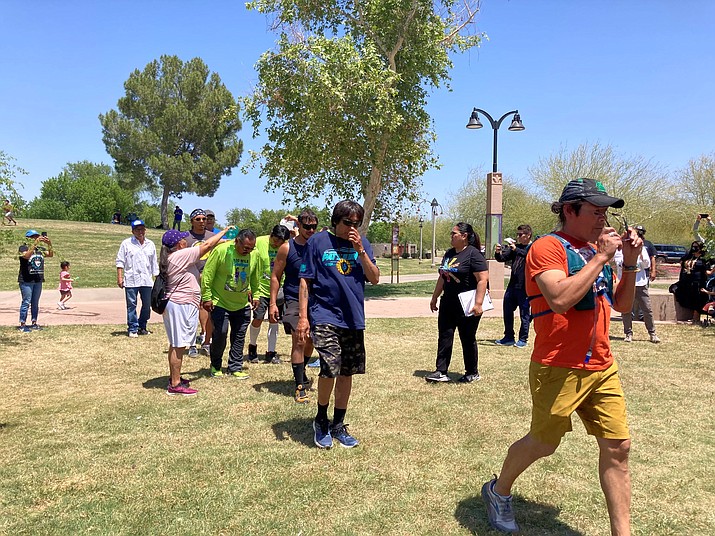 Hopi runners are blessed with water as they arrive at the event in Phoenix April 30 with the proclamation. (Katherine Locke/NHO)

HOPI, Ariz. — Hopi runners began their journey from Hopi to Phoenix April 28 to call attention to ongoing threats facing the Grand Canyon and their sacred Sípàapu.

During the run, which concluded May 1, runners carried a proclamation for the Arizona State Legislature, calling on lawmakers to pass a water law to protect the Little Colorado River’s ecological system and sacred places.

“Among the sacred places is Sípàapu, cradle of present Hopi civilization [and] a place of emergence from the third world to the present fourth world,” said Vernon Masayesva, founder and executive director of Black Mesa Trust. “It is also a passageway to the spirit world. There is no water law protecting [the] Little Colorado River and other rivers in rural Arizona.”

Hopi Tribal Chairman Timothy Nuvangyaoma (right) and Vernon Masayesva address the crowd while Hopi spiritual runners stand behind them at an event in Phoenix May 1 where they delivered a proclamation to be read on the Arizona House floor May 2. (Katherine Locke/NHO)

The Hopi runners arrived in Phoenix April 30 where they were received by leaders of the Salt River Pima-Maricopa Indian Community. They completed the run to Steele Indian School Park, formerly Phoenix Indian School, May 1 where they were greeted by Hopi sinom, attending the Gathering of Clans celebration.

Masayesva said part of the point of the rally is to protest the Arizona court decision denying the Hopi Tribe its right to use the Little Colorado River to practice their religious beliefs and traditions.

“Which is a violation of our right to practice religion,” he said.

“Half of the 12 Hopi independent villages have never consented to be a party to the Little Colorado River general stream adjudication,” Masayesva said. “The court and state lawmakers do not know this.”

Masayesva said the proclamation was Hopi’s way of challenging the court’s discriminatory decision and its violation of their religious beliefs.

“We thank all of you who have stepped up to the plate,” he said. “We are not standing alone. Saving Sípàapu is our way of honoring the teachings of our ancestors we call Moti Sinom. It is a way to honor a sacred agreement, a covenant with Ma’sau, to help protect our Earth Mother. Together we will persevere.”

The celebration ran from noon until dusk featuring representatives from various tribes speaking on the topic of, “Defending what is most sacred,” along with songs from Ed Kabotie, Ryon Polequaptewa and dances from Derrick Suwaima Davis. The event concluded with a concert by Tha ‘Yoties.

More information is available at Paatuwaqatsi Water is Life Run on Facebook.