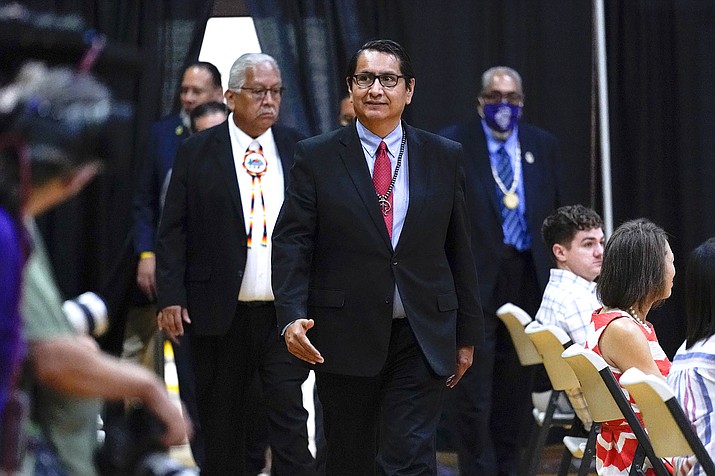 Navajo Nation President Jonathan Nez arrives for an event with first lady Jill Biden, Phoenix Mayor Kate Gallego, and Doug Emhoff, husband of Vice President Kamala Harris at Isaac Middle School in Phoenix, Wednesday, June 30, 2021. Nez announced in April 2022 he is seeking a second term in office. Nez's term as the tribe's top elected leader has been dominated by the coronavirus pandemic. He announced a reelection bid over the weekend from his hometown of Shonto. (AP Photo/Carolyn Kaster, Pool, File)

The Navajo Nation election season has revved up with several candidates — including incumbent Jonathan Nez, Buu Van Nygren and Ethel Branch and others — announcing their bid to become president for one of the largest Indigenous nations in the country.

Nez, whose tenure has been dominated by the coronavirus pandemic, is seeking a second term in office.

Nez made the announcement over the weekend from his hometown of Shonto, Arizona. Nez, 46, highlighted his administration's handling of COVID-19 and said he wants to ensure that plans to rebuild the economy, and extend power and water lines continues.

"We must continue on the path of recovery and healing together," he said in a statement.

On the Navajo Nation, vice-presidents are announced after the primary election and only those who make it to the general election select a vice-presidential candidate.

Nez is a career politician who started as vice-president of Shonto Chapter. Then served three terms as a Navajo Nation council delegate representing Shonto, Oljato, Tsah Bii Kin, and Navajo Mountain. Nez also served two terms on the Navajo County Board of Supervisor representing District 1 and one-term as vice-president to Russell Begaye. Nez was elected as president in 2018.

Nez holds a master’s degree from Northern Arizona University in public administration. Over his term, he has gotten criticism for his lack of communication with the Navajo Nation Council, the continued issues with the disbursement of hardship checks, and the way his administration has treated veterans.

Buu Van Nygren, from Red Mesa, Arizona, was selected as Joe Shirley’s running mate in the 2018 election. Nygren was selected after it was discovered that Shirley’s original running mate Peter Deswood was not a registered voter on the Navajo Nation, disqualifying him to run for office. Shirley was trying for a third term in office running against Nez and made it to the general election. Ultimately, Nez won by a huge margin, receiving nearly two-thirds of the votes. 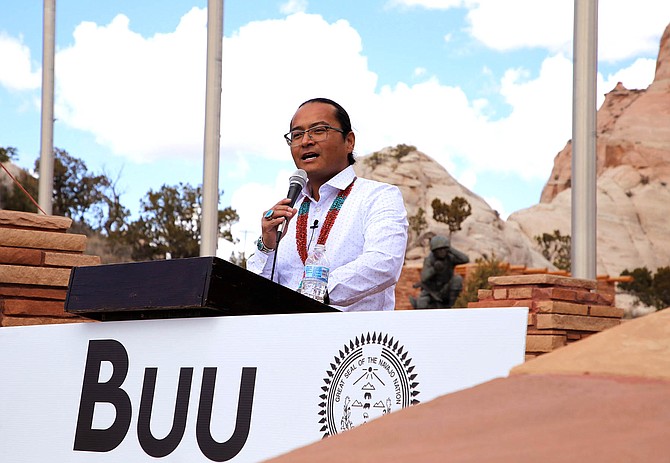 Buu Van Nygren announces his candidacy for Navajo Nation president in Window Rock, Ariz., on Monday April 4, 2022. Navajo Nation President Jonathan Nez, whose tenure has been dominated by the coronavirus pandemic, announced in April 2022 he is seeking a second term in office. A handful of others also have said they'll seek the position, including Buu Van Nygren, Ethel Branch, Frank Dayish Jr. and Earl Sombrero. (Noel Lyn Smith/The Daily Times via AP, File)

There has been speculation over the last four years that Nygren would run for president in 2022. He recently resigned as chief commercial officer at the Navajo Engineering and Construction Authority.

Before running for office, Nygren “spent eight years as a National Operation Trainer and Project Manager for a billion-dollar construction company,” according to his website. He is a graduate from Arizona State University and the University of Southern California, where he recently graduated with a doctorate degree in education focusing on organizational change and leadership.

On his website, Nygren named the economy, education, public safety, veterans, chapter houses, urban relatives, health and social services, environment and the elderly as main focus areas of his platform.

Ethel Branch previously served as Navajo Nation attorney general while Nez was vice president. Her office sued the federal government over the Gold King Mine spill, which dumped three million gallons of mine water laced with heavy metals into the Animas River, caused by the Environmental Protection Agency. During the pandemic, Branch launched a COVID-19 relief fund for Navajo and Hopi families that has raised more than $18 million, according to its website.

Branch is from Tuba City, Arizona. She graduated from Harvard Law School and also earned her master's degree in public policy from the John F. Kennedy School of Government at Harvard University. She is able to practice law on the Navajo Nation and in Arizona. She previously held bar memberships in the states of Washington and Oregon but those are inactive. 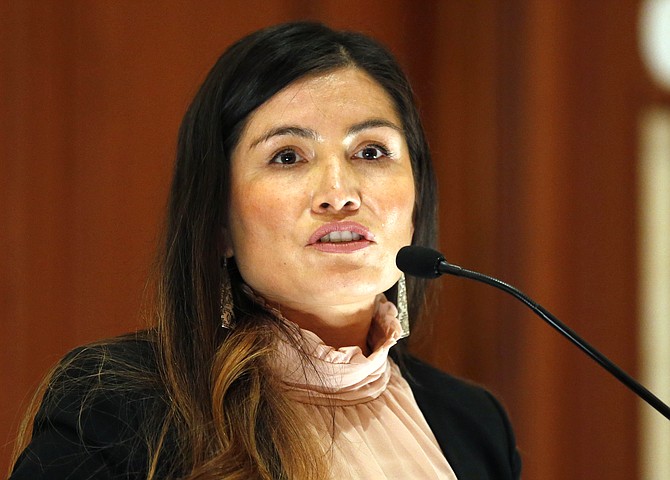 In this Monday, Dec. 4, 2017 file photo, Navajo Nation Attorney General Ethel Branch speaks during a news conference in Salt Lake City. Navajo Nation President Jonathan Nez, whose tenure has been dominated by the coronavirus pandemic, announced in April 2022 he is seeking a second term in office. A handful of others also have said they'll seek the position, including, Branch, Buu Van Nygren, Frank Dayish Jr. and Earl Sombrero. (AP Photo/Rick Bowmer, File)

“Join me in remembering how powerful and effective our precolonial Diné leaders and institutions were, and let’s draw upon that to reimagine and pursue a brighter, distinctly Diné future for our people and our nation,” Branch wrote on her campaign Facebook page.

Frank Dayish, who is from Shiprock, New Mexico, lost a bid for the tribal presidency in 2006 after serving as vice president under Joe Shirley Jr. Dayish has since worked in administrative positions in the health care and housing industries. 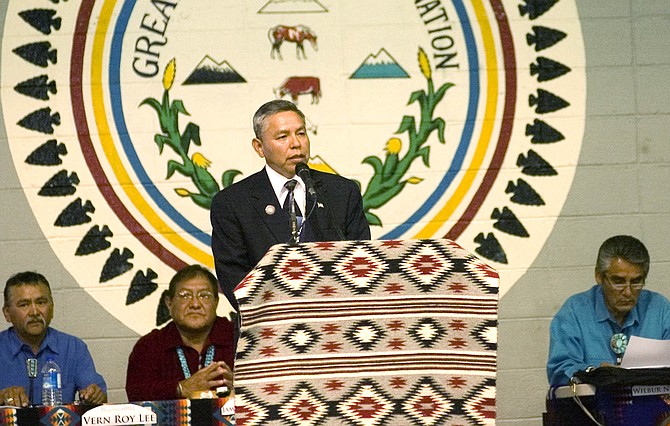 In 2021, he was let go from his position as the chief executive officer of the Navajo Housing Authority. Dayish held that position for less than a year and alleged that he was removed by the board in retaliation for coming forward about bad practices at the government agency. Before that he was the CEO for the Kayenta Health Center.

Earl L. Sombrero is community services coordinator for Tse Bii Kin Chapter in Arizona, where he was born and raised by his paternal grandmother in a traditional Navajo hogan. He still lives with his grandmother in a slightly modified hogan. He graduated from Page High School in 2000 and eight years later went back to school to pursue a bachelor of science degree from the University of Phoenix.

Upon graduating he returned to his community, working for Navajo Mountain Chapter as a community services coordinator, colloquially referred to as a chapter manager. In 2013, he was transferred to his current position, where in 2015 he helped his chapter become a Local Governance Certified Chapter, allowing for the chapter to have more autonomy and self-determination.

“I propose that all Navajo leaders sit and listen to the people,” Sombrero wrote in a statement sent to ICT. “First, I believe in adopting a more sustainable government that would put us on an all-inclusive path in our economy, environment, social, and culture. The concept and real application of a sustainable government are long overdue in our Navajo government.”

“We must include every Navajo segment to better represent elders, youth, veterans, and all our people who are incarcerated or dependent on substances. We must create programs to be beneficial to all segments of our Navajo people to heal and move forward in unity. We must unite in compassion, humility, love, and charity to advance the great Navajo Nation.”

The deadline to file for the tribe's top elected post is May 4. More than a dozen people typically run for president of the Navajo Nation, which has the largest land mass of any Indigenous nation in the country.

The primary election is Aug. 2. The top two vote-getters move on to the November general election.