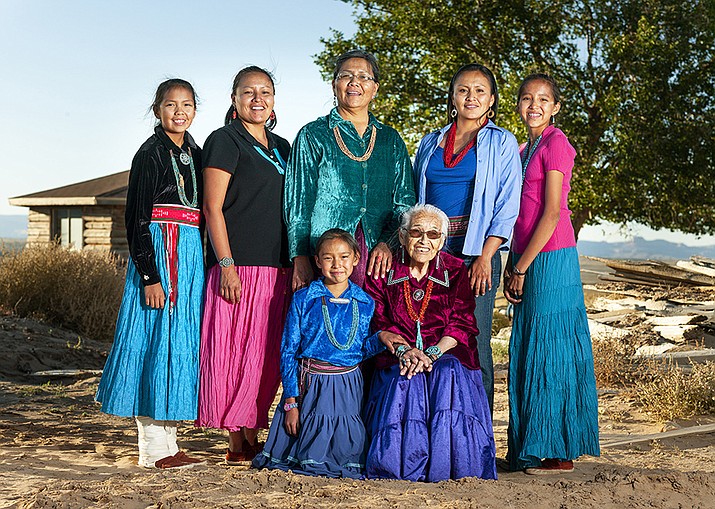 In the book "Voices of Navajo Mothers and Daughters: Portraits of Beauty," more than 60 Navajo women in 21 families talk about their experiences in their own words. (Photo/David Young-Wolff)

FLAGSTAFF, Ariz. — Just in time for Mother’s Day, a new book “Voices of Navajo Mothers and Daughters: Portraits of Beauty” is on sale with powerful voices of women telling their own stories in their own words.

The book is published by Soulstice Publishing in Flagstaff, Arizona with photography by David Young-Wolff.

Author Kathy Eckles Hooker lived and worked on the Navajo Reservation at Dilcon Boarding School more than 35 years ago, where she was a teacher for 33 years. She said her original hope for the book was education. She found that even with the close proximity to the reservation, most people in Flagstaff know very little about the Navajo reservation or the stories of the women on the reservation.

“Here it is right next door to us,” she said. “There’s no excuse for people not to know about the reservation and about the culture and traditions. That is very much my hope. I was, in some ways, very selfish because I desperately wanted to learn more myself. And so it was an amazing education for me, also.”

But Hooker said she didn’t want the book to sound stale like reading some anthropological books or have the women’s voices being interpreted by someone else. She wanted to hear directly from the women and let their voices shine through.

“That’s the real thing,” she said. “I don’t want a middle man getting in the way. I want to note their stories and what they have been through. That was my intent all along.”

The book succeeded beyond her expectations.

“The book just seemed to grow and grow,” Hooker said. “And it’s bigger than the small idea I had in 2009 and it really has just exploded. The intent was for me to learn more at a very small level, just one person, but that has expanded in ways that I never could have anticipated.”

Amy Begay, who worked with Hooker at the middle school, said she jumped at the chance to have her mother’s stories showcased in the book.

“I always envisioned having a story written about my mother or grandmother,” she said. “My husband and I always said we should make a book.”

Begay said there have always been educators on the reservation and, like Hooker, they were part of the community and that is one of the reasons she was excited about the opportunity. She also wants to use the book to teach her own culture to her students.

“A lot of the [students] come to my Navajo class in sixth, seventh, eighth grade. A lot of them don’t get these type of teachings at home because they’re either being fostered or their grandparents are raising them,” Begay said.

She said sometimes grandparents are not passing on the knowledge of culture or the Navajo language to those children. She thinks Hooker’s book can go a long way in making sure some of that knowledge is passed down.

“Some live in a Hogan, some live in towns. They all live in different areas and they had different expectations from their mom, from their grandparents. None of these stories are the same," Begay said.

The stories are deeply personal stories of strength and perseverance, which was an aspect Hooker wanted to capture.

“I did look around. And it’s one of the reason why I wanted the book — I couldn’t find anything about women, Native women speaking their story; their joys, their hopes, their sorrows, and, especially in the Navajo community, while trying to preserve their culture,” Hooker said.

She said that while there are always people coming in to study Native people and their cultures — that kind of thing did not touch her at all and it isn’t something she wanted her book to represent.

“The human qualities that we see in all those 21 interviews is priceless,” Hooker said, describing the feeling of wanting to knock on someone’s door and saying, ‘I want to know all about you,’ but knowing she could not do that.

“We did it in a more indirect way. But I could sense that the women wanted to be heard. And they were so excited for this book to come out. That is so validating for them and for me with this project," she said.

“Each family talked about themselves and their own experiences, but all 21 families shared so much in common,” she said. “It just eventually was almost like a weaving, this buildup of information and knowledge and emotion about these women.”

The book can be ordered from Soulstice Publishing and from Brightside Bookshop. There will be an event at the Museum of Northern Arizona featuring some of the women interviewed in the book May 21 at 2 p.m., at the museum.