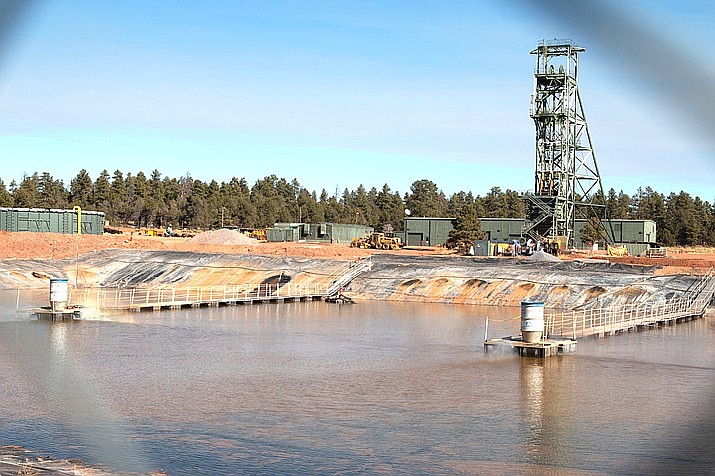 FLAGSTAFF, Ariz. — Environmentalists are upset that the Arizona Department of Environmental Quality (ADEQ) approved an aquifer protection permit April 28 for a uranium mine near Grand Canyon National Park.

The mine, formerly Canyon Mine, now called Pinyon Plain Mine, is located about 10 miles south of Grand Canyon’s South Rim in Kaibab National Forest, and is owned by Energy Fuels Inc.

If they appeal, the first round would be an administrative appeal to a state water board and then the appeal would go to the state courts.

Taylor McKinnon, a spokesman for the Center for Biological Diversity, said neither the uranium industry nor the regulators can ensure that mining won’t permanently damage the Grand Canyon’s aquifers and springs.

“This permit strenuously ignores science showing the potential for deep aquifer pollution, and in a region still plagued by seven decades of uranium industry pollution, risking more, as this permit does, is dangerous,” he said.

McKinnon said it’s ridiculous to approve the permit for this mine instead of protecting a natural treasure.

“Why can’t we make better decisions?” he asked.

McKinnon said he’s dismayed by the permit approval decision because it risks irrevocable harm to the aquifer feeding Grand Canyon springs. He said this ignores the science showing that there is activity between the shallow and deep aquifers.

“If that happens it’s irreversible. These are not risks that should be taken,” he said.

McKinnon said the mine threatens to permanently contaminate deep aquifers that feed Havasu Creek and other springs. The approval comes despite calls by the Havasupai Tribe and conservation groups to close the Pinyon Plain Mine, given its risks to water and tribal cultural resources.

Michè Lozano, Arizona Program Manager for the National Parks Conservation Association, said mining uranium in the Grand Canyon watershed threatens the enduring legacy of the landscape and jeopardizes the entire water supply of the Havasupai.

“The company’s renaming campaign, from Canyon Uranium Mine to Pinyon Plain Mine, does nothing to change the incredible threats that uranium mining poses to the limited underground sources that feed the Canyon’s creeks and waterways,” he said.

Lozano said he is concerned about how possible contamination from the mine will impact wildlife that accesses the water.

McKinnon said the approval of the mine permit is an example of racial environmental injustice.

“This is obviously an affront to the Havasupai,” he said. “It’s terrible that states and federal regulators are so brazenly running roughshod over the Havasupai Tribe, and that’s gone on for decades. This continues decades long decisions with interests of the uranium industry over Indigenous people. It’s a long brutal history in our region.”

McKinnon said he is astonished that this can happen in 2022

Research from U.S. Geological Survey published in 2020, “suggests a hydrologic connection in the area of Canyon Mine” between the Coconino aquifer, which is flooding into the mine, and the deeper Redwall-Muav aquifer, which is the source of the largest springs in the Grand Canyon and Havasu Springs on the Havasupai Tribe’s land.

Research also concluded that “contaminants, either from land-surface or subsurface sources, are likely to be transported into the deep aquifer.

According to environmentalists, water in a Coconino aquifer observation well at Canyon Mine is chemically similar to several Grand Canyon springs, as is water from a well drilled into the deeper Redwall-Muav aquifer. Those are indicators of a hydrologic connection and demonstrate the risk that this mine presents to these waters.