St. Michaels too much for Red Mesa in 1A North softball win 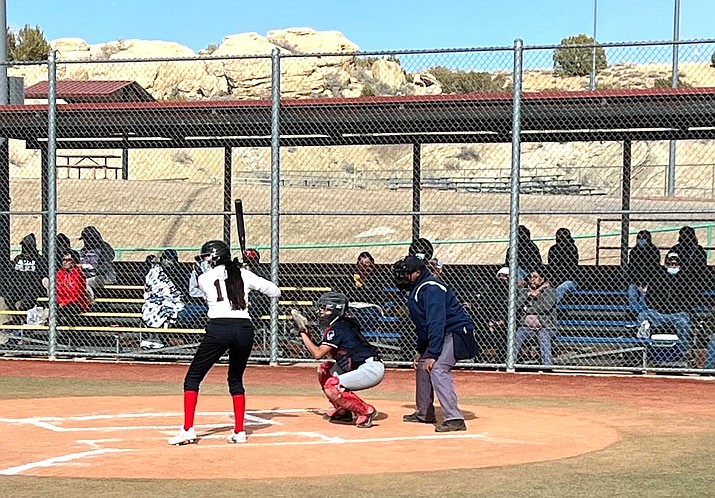 GALLUP, N.M. — Autumn Shirley, Nayauna Zah and Santana Dalgai each scored runs for Saint Michaels in the second inning, leading the Lady Cardinals to a 12-4 win over 1A North competitor Red Mesa in a softball game played March 22 at the Gallup Sports Complex.

The Lady Cardinals play their home games in Gallup because they are without a facility.

The Saint Michaels infield pressured the Lady Redskins into committing four costly errors in the first inning alone. And it didn’t help matters when Shirley hit an in-the-park home run and Jenna Ross followed with an RBI in the bottom of the second.

Senior Selena Gonzales managed a pop up hit for Red Mesa in the third inning, but that was caught by senior Gabriella Simpson and no runs were scored in that play. All in all, Saint Michaels’ (5-2, 2-0) senior pitcher Jenna Ross and sophomore shortstop Shirley were simply too much early on for Red Mesa (1-2, 1-2).

Lady Cardinals head coach Karen Tom praised her team’s offensive and defensive effort. “We hit very well and that was a big part of the game for us,” Tom said. “Defensively, I was very pleased. We got at nearly every ball on defense and protected home plate.”

Shirley got Saint Michaels on the board with a steal from first base to third on a Red Mesa throwing error. Then Zah scored on an RBI by Ross, who subsequently came in on a hit by designated player and junior Jalin Perry.

Saint Michaels set the tone in the first few innings and the Lady Cardinals kept on pouring it on with sound fundamentals and decision-making. The score stood at 3-1 at the start of the third inning. But the Lady Redskins stayed tough and mounted a momentum run toward the end of the fourth.

Junior Danika Chico scored for Red Mesa in the fourth inning to put the score at 7-2 in favor of the Lady Cardinals. A subsequent error by Saint Michaels enabled senior Danielle Yazzie to touch home and cut the scoring deficit to 7-3.

But Red Mesa’s pitching suffered and the Lady Cardinals scored on a couple of walks. An error allowed Shayla Myers of Saint Michaels to score in the fifth. That run put the score at 11-4.

Ross started at pitcher for Saint Michaels and recorded 11 strike outs and three walks in five innings. She was relieved by the left-handed Simpson, who had five strike outs and no walks. Ross was 3-for-3 at bat and Zah went 2-for-2 for the Lady Cardinals.

Aubrey Redmustache started for Red Mesa at pitcher and recorded one strike out and five walks.

“We started to get some momentum around the fourth inning and that was a good thing,” Red Mesa head coach Henrietta Haven said. “We just got cold and lost a little bit of gas out there. We have to cut down on our errors.”

The Lady Cardinals return eight seniors from last year’s squad — which went to the 1A state semi-finals, losing to Superior 13-9. The eventual 1A North champion was Williams High — which currently leads 1A North with a 2-0 record. The Lady Cardinals play Williams April 22 in a doubleheader.

Both teams play each other again on March 25 in Teec Nos Pos.