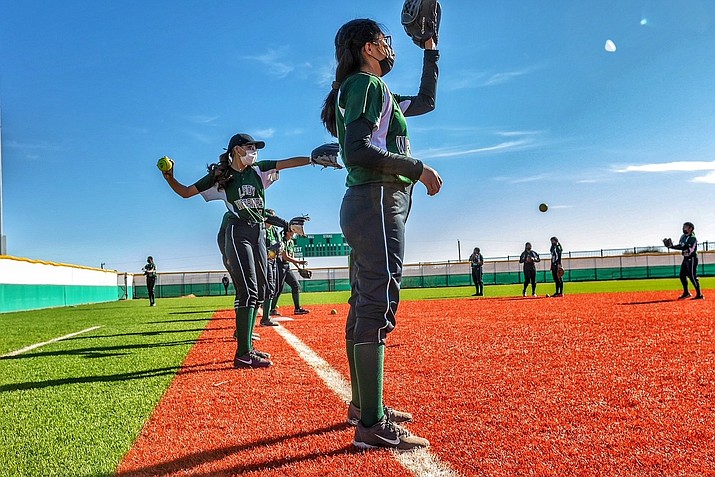 Lady Warriors on a pre-game warm up prior to the start of the second game. The Tuba City varsity softball team won their home non-conference game against Hopi (Keams Canyon, Arizona) by a score of 22-16 March 8. (Gilbert Honanie/NHO)

TUBA CITY, Ariz. — After not playing softball or baseball for two years because of the COVID-19 pandemic, Tuba City High School celebrated the spring season March 8 with a cookout for fans at the opening day against Hopi High School.

With the weather full of sunshine, mildly warm temperatures and an occasional cool breeze, both the softball and the baseball teams played doubleheaders. 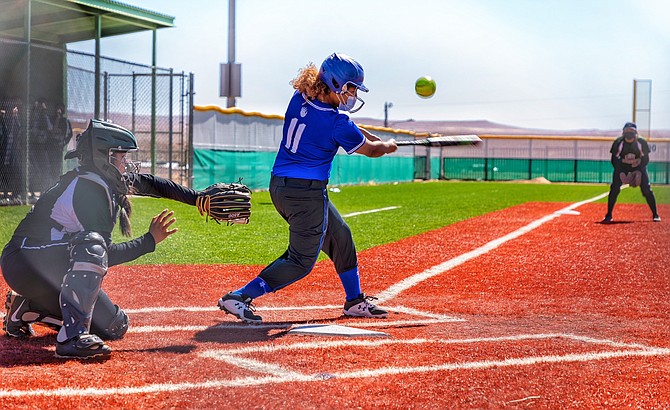 A Hopi High Lady Bruin is first at bat at the beginning of the first game March 8 at Tuba City High School. (Gilbert Honanie/NHO)

As Tuba City hit the field for their first game, the team immediately took the lead against Hopi, eventually winning 15-5 in six innings with the umpires calling the game because of the AIA run rule.

In the second game, the Lady Bruins took the lead for the first three innings. Eventually, the Lady Warriors rallied to catch up, winning the second game 22-16 playing a full seven innings.

“We won both games, but we still have a lot of work to do,” said Tuba City Head Softball Coach Joe Baca. “Some of the girls are a bit rusty and some are playing softball for the first time.”

On the other side of the school, the TCHS Warrior baseball team won both their games 20-0 and 13-1 respectively.

The Lady Warriors played Page March 14. They next face Pinon at home March 22.