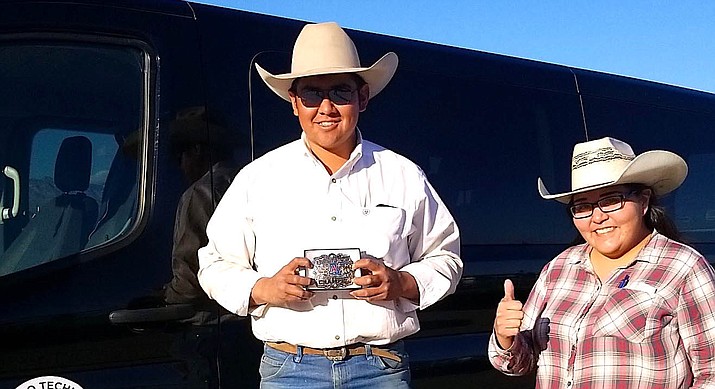 CROWNPOINT, N.M. —The Navajo Technical University Rodeo Team travelled to Tucson, Arizona, March 5 to compete at the University of Arizona for their rodeo season opener.

The Grand Canyon Region of the National Intercollegiate Rodeo Association (NIRA) held its first event of the year that gathered athletes from its eight university and college alignment.

The competition proved that NTU is among top contenders with Rooster Yazzie of Coyote Canyon, NM garnering top honors in the steer wrestling event. The Skyhawk men also earned 324.5 points as a team and third place at the event.

“There were some good performances from the team, but of course we must continue improving and preparing for the next show,” said Nicole Pino, Head Coach of NTU Rodeo Team, as she discussed how the team worked together to motive and assist one another during the rodeo. “We are staying positive and looking forward to our upcoming show in Casa Grande, Arizona.”

The winner of the steer wrestling event at the UofA rodeo, Rooster Yazzie, put his steer down in 5.1 seconds to earn 145 points and a trophy buckle. The win moved him into third place of the steer wrestling rankings with 273 points and eight points ahead of teammate Matthew Jodie. Mr. Yazzie also competes in the tie-down roping and collected 32 points for the event. The all-around athlete is currently earning his certificate with NTU’s Commercial Driver’s License (CDL) and Heavy Equipment Program and is focused on completing his studies and representing the university with the best of intentions.

“It’s always a great feeling to be in the winner’s circle and it’s even more exciting at this level, but I can’t let that allow me to slow my pace.” said Yazzie about his win among top college athletes in the region. “It’s important for me to stay focused on my studies and practice, I always trust the outcome will be positive-like winning.”

NTU athletes, Matthew Jodie did not earn any points in steer wrestling, and bullrider Milton James was unable to make a successful ride.

The Skyhawk men’s rodeo team are currently in fourth place in the Grand Canyon Region with 1107. 50 points behind Mesalands Community College 3rd, New Mexico State University 2nd, and leaders Central Arizona College. The NTU rodeo team is seeking student athletes who want to earn a certificate or degree while competing at the collegiate level.