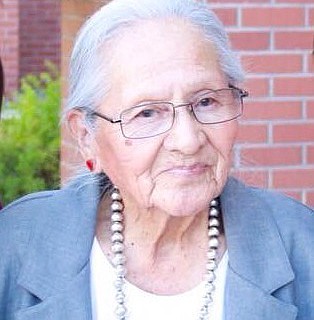 Dorothy Bitsilly passed away Feb. 23 at the age of 93. (Photo/OPVP)

Bitsilly is Tábąąhá (Water's Edge Clan), born for Tódich'ii'nii (Bitter Water Clan). Her maternal grandfather was Táchii'nii (Red Running into the Water People Clan) and her paternal grandfather was Naakai dine'é (The Mexican Clan). She is originally from Tohatchi, New Mexico. She was born on September 28, 1928.

“The loss of Dorothy Bitsilly deeply saddens our people and communities,” Nez said. “Throughout her lifetime, she lived by the teachings of our elders and demonstrated T’áá Hwó Ají Téego, self-reliance and self-determination, through her accomplishments and compassion for her community of Tohatchi and many of our people. Her work and dedication will undoubtedly live on for many generations. Dorothy's unyielding advocacy for the Red Willow Farm project serves as an example of what it means to love and serve your community as a resilient Navajo woman. Her contributions will be missed and cherished.”

In her years serving as a farm board president, Bitsilly was known for her dedication to the Red Willow Farm project, which supplied a water well and electricity to local farmers.

Her advocacy was largely driven by her dream to see the Navajo people achieve food sovereignty from agriculture.

She also served over 30 years as a Bureau of Indian Affairs education liaison, was the Vice President of the Fort Defiance Agency Council on Aging, and the Navajo Nation representative to the New Mexico Aging Advisory Policy group.

“The Navajo Nation mourns the loss of Mrs. Dorothy Bitsilly who is a beloved mother, grandmother, and sister,” Damon said. “She is a respected community leader who loved her family deeply and enjoyed long days farming, watching old western movies, and cheering for the Green Bay Packers. We honor her legacy by remembering her kindness and leadership as a Diné matriarch who made a difference in so many lives. The Navajo people send prayers to give strength and protection to Madam Chief Justice JoAnn Jayne and the Bitsilly family during this time.”

During her lifetime, Bitsilly was recognized as Shí Masani of the Navajo Nation from 2006-2007, received the 2020 Community Lifetime Achievement in Excellence Award, and the ‘Farm to Table’ 2020 Farmer of the Year honor.

“The Second Lady and I express our most sincere condolences to a true matriarch who embodied the values of hard work and dedication that make us the Navajo people," Lizer said. "In addition to her many accomplishments in the Tohatchi community, I believe her character is best exhibited through the exemplary leadership of our very own Madam Chief Justice JoAnn Jayne."

Married 45 years to her husband, the late Guy Bitsilly Sr. she was preceded in death by her son Guy Bitsilly Jr.

Bitsilly will be laid to rest at the Tohatchi Community Cemetery March 2. A public viewing will be held from 8:30-9:30 a.m. with a memorial service to follow at the Church of Jesus Christ of Latter-Day Saints in Gallup, New Mexico.