Hopi High academics and athletics coming back from outbreak 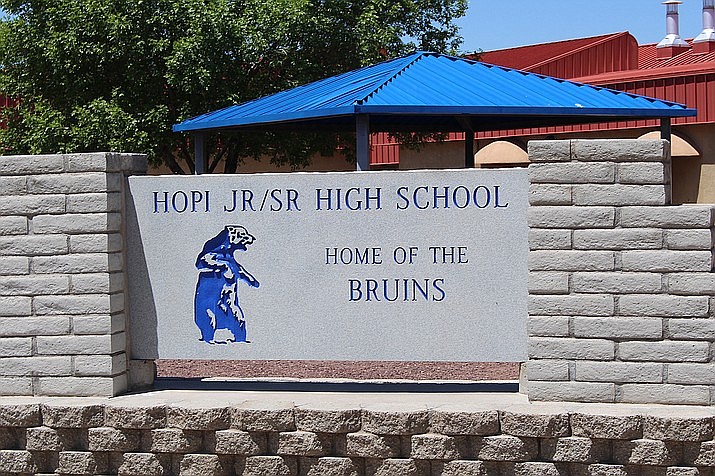 A surge in COVID-19 and the Omicron variant threw Hopi High School’s academics and athletics into havoc and forced online learning during much of the third quarter of this school year. (Photo/NHO)

POLACCA, Ariz. — A surge in COVID-19 and the Omicron variant threw Hopi High School’s academics and athletics into havoc and forced online learning during much of the third quarter of this school year.

Athletics were put on pause during this time without any games or practices. When athletics returned, boys and girls basketball teams sometimes had doubleheaders in one day, which is not unusual for tournaments, but is for regular season games.

Hopi High Athletic Director Ricky Greer said it has been a unique year, but they were grateful that the Bruin teams were able to finish the winter season, unlike last year when there were no athletics because of the pandemic.

The Hopi High girls and boys teams played about 11 games each before Christmas. Then some of the opponent’s teams had to be rescheduled because of issues with COVID.

“Then Omnicron hit over the holidays. We had one game our first week back and then went into a shutdown and distance learning 100 percent online,” Greer said.

Many students had problems getting online and some students were dropped because of the 10 day rule. However, when school restarted with some in person learning, these students reenrolled. During the online learning period, students were also sent packets to do work.

The Hopi Tribal Council discussed the problems with BIA officials about broadband during a meeting Feb 24 as they pursue federal funding to improve broadband on Hopi.

Greer said the educational needs for broadband on Hopi are necessary and improvements would be greatly appreciated.

“We have hot spots, but the hot spots are only as good as cell service, which everyone out here knows is intermittent. We need much better broadband across Hopi,” he said.

During pauses in practices and games, Hopi High coaches spoke to their players via zoom.

On Feb 14, Hopi High returned to hybrid learning, meaning that some students came to school on Mondays and Wednesdays while other students attended on Tuesdays and Thursdays.

Sports returned to Hopi High Jan 31. Greer said a lot of teams in the northeast section of the state were faced with the same issues with online learning and sports teams delaying games.

Hopi had to face Round Valley in its first return to games. Round Valley has solid basketball teams and Hopi lost their initial games, but the boys went on to beat Ganado in both ends of a doubleheader as a highlight for their season.

The Hopi boys and girls teams only had 10 regular season games this year where they usually have about 25-30. Both teams ended their season by losing in the first round of regionals.

“The three week pause of no practices halted the progress,” he said.

The Hopi girls lost the doubleheader to Ganado, but came back to beat Many Farms in their next game.

Greer said it was hard when COVID increased in January and the executive order was issued on Hopi to stay home.

Greer said wrestling had a tough season with the cancellation of meets or not being able to attend tournaments because of COVID. He said before Christmas most of their meets were canceled due to team members getting COVID.

“The wresting team was building positive momentum and then we had the three week pause,” he said.

Because of ceremonies and academic ineligibility, only one boy and one girl wrestled for Hopi at sectionals. Greer said they both wrestled extremely hard, but lost in the first round.

Greer said Hopi wrestling only had about 10 matches this year while the other schools at sectionals had competed in 30-50 tournaments. He said that lack of experience hurt the Hopi wrestlers.

“We didn’t get the mat time we hoped for,” he said. “But the previous year we had no mat time at all, so to have some mat time was special.”

Greer said the community has been extremely supportive during this tough time. He said players and coaches most years get into routines of practices and games, but they have not been able to do that for the past two years.

He said when the basketball season started that they limited attendance to 250 spectators, but when they returned after Jan 31 the only people who could attend were parents of the players. They also used digital ticketing so no cash was exchanged at the door. The games were streamed online.

“We hope that next year will look a lot more normal so student athletes can show off their talent,” he said.

Greer said the basketball doubleheaders did not have as much impact on the players and coaches as he thought as there were concerns about student safety and health.

“But the kids came back in better shape than we expected,” he said. “The players handled it well. The coaches were receptive as they wanted to get in the minimum of ten games so they would quality for post season play.”

Greer said spring sports should be good as they have had good turnouts for practice. Baseball, softball and track are outside sports which carry less chance of COVID transmission.

Baseball and softball seasons will start March 8 for Hopi with track starting March 11.

“We hope to finish the school year strong,” he said.

On Feb 23, Hopi High released students early because of snowstorms, but that was the only day impacted by the storm.