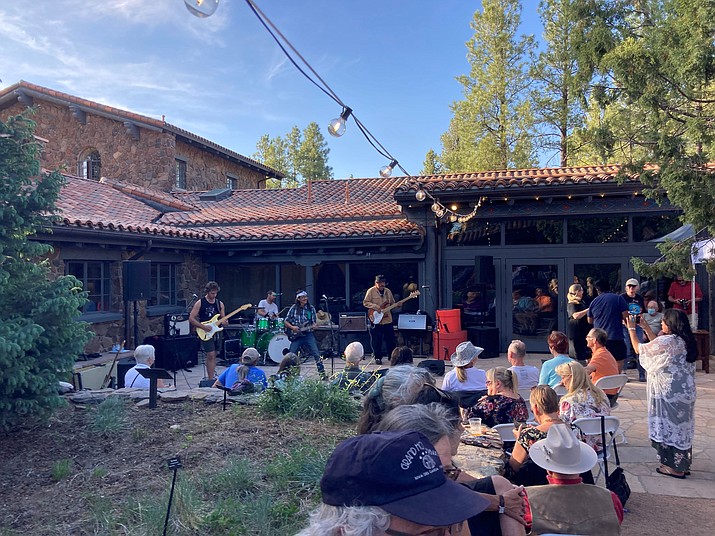 ’Tha Yoties,’ Xoyote Soldier Tour purpose is to bring attention to the Indigenous people and lands of the Colorado Plateau through awareness and education of the crowds they play to. Above: ‘Tha Yoties’ at the Museum of Northern Arizona during a recent performance. (Katherine Locke/NHO)

FLAGSTAFF, Ariz. — Tha Yoties, a Native American reggae and rock band, is just as much about environmental justice as it is about the music.

The national tour, called the Xoyote Soldier Tour, kicked off in Flagstaff June 8, but has taken them to New Mexico, Colorado, Kansas, Minnesota, Indiana, Oklahoma and California with stops at reservations, museums and educational institutions.

Kabotie said the purpose of the tour is to raise a heartfelt cry for the Indigenous people and lands of the Colorado Plateau region, while comparing social and environmental struggles that Indigenous people face in other parts of the country.

“Though the Colorado Plateau houses the most number of national parks per square mile of any part of the country, it is also one of the most exploited lands for uranium, water, oil and coal. The tribes of the region continue to shoulder the consequences of reckless mining practices,” he said.

Kabotie said the future of the nation will be determined by “our ability to mourn our history of systemic oppression, and our willingness to work for a future in the true spirit of liberty and justice for all.”

Kabotie said they want to share the message of the difficulties of the people on the Colorado Plateau while interacting with the history of Indigenous people and the issues they face today. This is why they included stops at Phoenix Indian Center, Heard Museum and Arcosanti.

One of the most emotional stops was at the San Creek Massacre site of 1864 in Colorado where Southern Cheyenne and Arapaho people were killed. Another heartfelt stop was in Omaha, Nebraska, the site of the Dakota 38 hangings, the largest mass hanging in American history. Kabotie said these two incidents were similar.

The tour also attended a Juneteenth rally and visited the George Floyd Memorial in Minnesota.

“There are issues that Native Americans have faced as well as the African community,” he said.

Kabotie said that while the reaction of people has been varied most have been extremely supportive.

Kabotie said the environmental issues on the Colorado Plateau are important as the Little Colorado water remains essential to life on Hopi.

He said federal, state and local governments have not recognized Hopi rights to the Little Colorado River water because it’s not within the reservation boundaries that the federal government drew.

“This causes us to die of thirst...some people don’t recognize the water crisis we are living in. That people on Hopi and Navajo live with every day,” he said.

But just as important are the 500 uranium mines on the Navajo Reservation that need to be cleaned up, the Canyon Mine on Havasupai and the Ute Mountain Ute’s fight against the White Mesa Mill.

“We are all interconnected just like the water tables are interconnected,” he said. “This is the land of the Great Spirit. Our concern is for the entire region.”

Kabotie said they are learning the stories of the region with every stop. While attending the rallies in Minnesota, the Missing and Murdered Indigenous People issue also arose. He said another common concern is that Native Americans were expelled from their lands.

“We have been living in the same place for centuries. It’s heartbreaking to see how we’ve been displaced,” he said.

Kabotie said the group performed on Second Mesa at Tsakurshove and Pojoaque. Kabotie's father is Hopi and his mother is Santa Clara Pueblo from New Mexico. He was also ecstatic that when they performed at Hopi that Vernon Masayesva from Black Mesa Trust and Bucky Preston from the Water is Life run spoke at the event.

He said these events were meaningful because people on the reservations had not been able to congregate for a long time due to the COVID-19 pandemic.

“These gatherings were special and gave us fuel for the rest of the journey, he said.

The tour has also had its challenges as most of the states they visited were hot and humid.

“We’re desert kids so this is a different kind of heat,” he said. “The heat was indicative of the message we’re carrying about environmental consciousness.”

He said the tribes suffered environmental injustices by the federal government, boarding schools and industrial mining.

“But people have been stirred by the pandemic and the murder of George Floyd,” he said. “We have a window to share with the country, the world and whoever will listen.”

Kabotie said they also had some problems with the trailer they were pulling and the group puts in work with production, sound, lighting and merchandising.

“But I was encouraged by the positivity and the flexibility of everybody,” he said.

Kabotie said during the tour the group is doing a lot of work themselves, but are supported by many individuals and sponsors including the Sierra Club Grand Canyon Chapter, Wild Arizona and Grand Canyon Trust.

“The efficiency of the group is mind blowing,” he said. “These conditions are real and do exist. We need to meditate and reflect on the system’s injustice if we are going to move forward in a positive way. We need to think with our hearts, not just our minds, so we can move forward in the spirit of liberty. We need to listen and learn.”

The Yoties carry their CDs with them and people can find their music on Spotify. They also produced a video with Sage Bond called Genocide,” which can be found on YouTube.