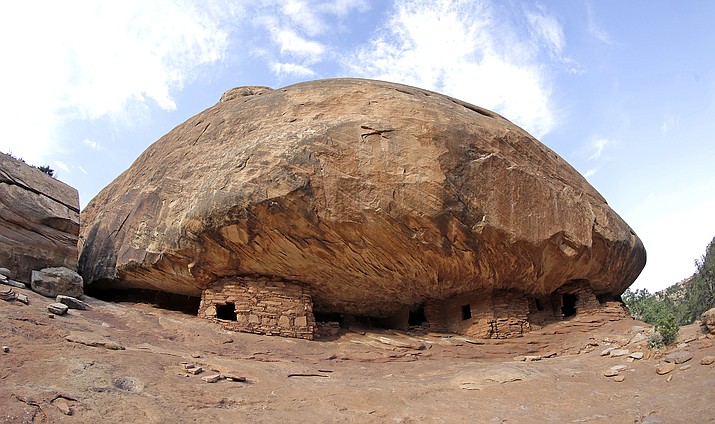 SALT LAKE CITY (AP) — Federal officials and tribal nations have formally reestablished a commission to oversee land management decisions at a national monument in Utah — among the first such joint governance agreements signed by Native Americans and U.S. officials.

Leaders from agencies including the Bureau of Land Management and U.S. Forest Service met with representatives from five tribal nations June 18 to sign a document formalizing the Bears Ears Commission, a governing body tasked with day-to-day decisions on the 2,125-square-mile Bears Ears National Monument.

In 2021, President Joe Biden restored two sprawling national monuments in southern Utah — Bears Ears and Grand Staircase-Escalante — reversing a decision by President Donald Trump that opened for mining and other development hundreds of thousands of acres of rugged lands sacred to Native Americans and home to ancient cliff dwellings and petroglyphs.

Together, the monuments encompass an area nearly the size of Connecticut, and were created by Democratic administrations under a century-old law that allows presidents to protect sites considered historic, geographically or culturally important.

Tribes have long sought a larger role in their oversight.

"This is an important step as we move forward together to ensure that Tribal expertise and traditional perspectives remain at the forefront of our joint decision-making for the Bears Ears National Monument. This type of true co-management will serve as a model for our work to honor the nation-to-nation relationship in the future," said Bureau of Land Management Director Tracy Stone-Manning, one of the agreement's signatories.

The Bears Ears Commission and Obama-era joint governance plan was altered to the chagrin of tribal officials when Trump downsized the monument in 2017. The five nations, all of which were driven off land included in the monument, are the Hopi, the Navajo Nation, the Pueblo of Zuni, the Ute Mountain Ute Tribe and the Ute Indian Tribe of the Uintah and Ouray Reservation.

"Today, instead of being removed from a landscape to make way for a public park, we are being invited back to our ancestral homelands to help repair them and plan for a resilient future. We are being asked to apply our traditional knowledge to both the natural and human-caused ecological challenges, drought, erosion, visitation, etc.," said Bears Ears Commission co-Chair and Lt. Gov. of Zuni Pueblo Carleton Bowekaty.

Tribes also play a role in jointly managing some resources within national park units, including Canyon de Chelly National Monument on the Navajo Nation and Point Reyes National Seashore on the historic lands of the Coast Miwok and Southern Pomo in California.