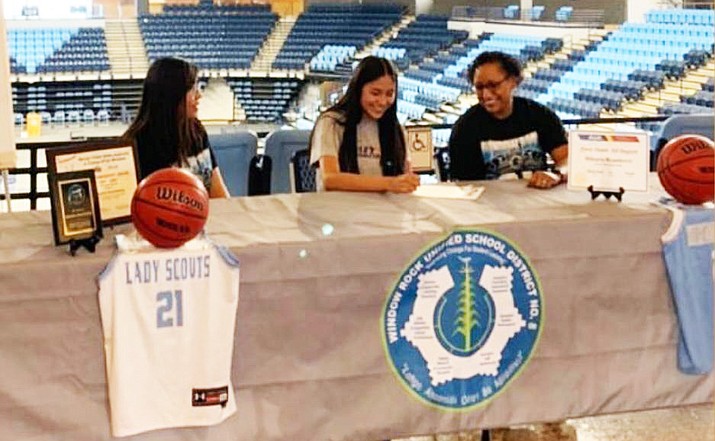 WINDOW ROCK, Ariz. — Two players from the 2021-2022 girls basketball team at Window Rock High School will take their talents to the next level — both slated for out-of-state colleges.

Mikaela Roanhorse and Desiree Nelson each signed letters-of-intent last month to play college basketball, Lady Scouts head coach Gabrielle Whitney confirmed. The two are the only student athletes to sign to play in any sport from Window Rock High School.

Whitney said the fact that two former Lady Scouts are headed to college to study and play is extra-special. She said it means something words can’t describe, considering last year was her first year as a head coach at Window Rock, after serving several years as an assistant basketball coach at Ganado High School.

“I’m happy for both of them,” Whitney said. “Each has a positive attitude. Each works hard in the classroom and when they, individually take the court, they play hard and want to win. They will be assets to the teams they’re heading to.”

Roanhorse played shooting guard for the Lady Scouts and averaged close to 10 points per game. She and fellow senior co-captain Robey Talkalai were a force to be reckoned with, leading Window Rock (12-14, 5-6) to post-season play where the team lost in the second round to Bourgade Catholic of Phoenix, 51-47.

Roanhorse emerged as a reliable sharpshooter when Talkalai got double-teamed, which was often. Talkalai averaged closed to 18 points per game and was one of Arizona’s best players. Roanhorse said she thinks she’s a good shooter and the kind of player who puts fear into opposing teams.

“I think I can play at the next level and make the adjustments to the college game,” Roanhorse said. “I’m ready. I’m going to work really hard over the summer in improving my game. I plan to major in nursing.”

Nelson played the forward position and was a leading rebounder for the Lady Scouts. It was customary to witness Nelson grab a defensive rebound and go coast-to-coast and score. She has said she plans to study something health-related.

Nelson was honorable mention in the competitive 3A North division. She was a member of Window Rock’s National Honor Society and received an award as the school’s Most Dedicated Student.

Roanhorse and Nelson were multi-sport athletes at Window Rock High School, but will focus solely on basketball at college, Whitney said.