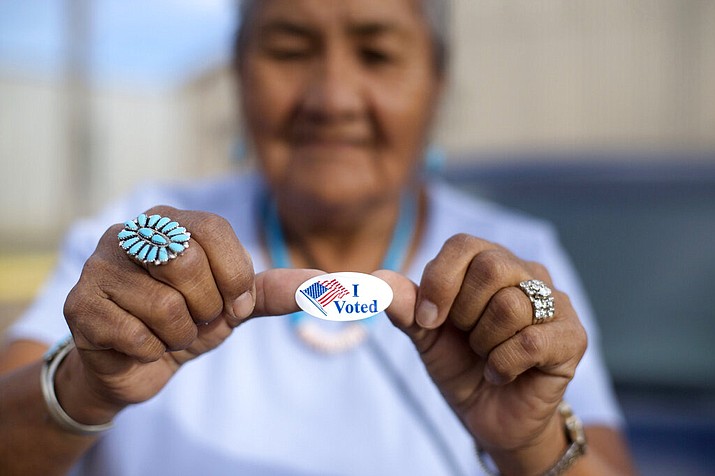 In this Aug. 28, 2018, file photo, Mildred James of Sanders, Arizona, shows off her "I Voted" sticker as she awaits election results in Window Rock, Arizona, on the Navajo Nation. The tribe says bills recently signed into Arizona law would make voting more difficult than it already is on the vast reservation. (AP Photo/Cayla Nimmo, File)

That is good news for Native American voters in Arizona, who, because of rural locations, often have a hard time getting to a place where they can vote.

Jaynie Parrish, executive director for the Navajo County Democrats, said lots of people who are on the Permanent Early Voting List would have been affected, and those include lots of Native Americans.

She said in February, as Navajo County Democrats instituted a new program called Family Votes, that it was important to get information about changes out to voters. She said the Permanent Early Voting List is something they call the Active Voting List.

"We definitely have to make sure that all the people we're trying to reach out to know they can update their registration with us," Parrish said.

The GOP and state chairman Kelli Ward had claimed mail-in voting — approved in 1991 and overwhelmingly favored by Arizonans — violates the constitution’s mandate that ballots must be secret. Jantzen cited state statutes that require the use of envelopes that don’t reveal voting choices or party affiliation and instruct voters to sign the affidavit and mark it in a way that conceals their selections.

Republican officials are considering an appeal of the ruling by Jantzen, who heard the case after it was rejected by the Supreme Court in April because a lower court had not yet heard it.

“It is important to note that this case is not about allegations of fraud in the voting process,” Jantzen wrote in his ruling. “It is not about politics. It is not even about whether the parties believe mail-in voting is appropriate. It is about one thing: Is the Arizona Legislature prohibited by the Arizona Constitution from enacting voting laws that include no-excuse mail-in voting? The answer is no.”

The White House relased a report in March, which addressed how Native Americans and Alaska Natives vote at lower rates than the national average, though a surge in voting contributed to President Joe Biden's win in Arizona, a state that hadn't supported a Democrat since 1996.

The report said local and federal officials need to do more to ensure Native Americans have equal access to ballots.

Mail-in ballots are available to any eligible registered voter in Arizona who requests one, and voters can add their names to the state’s active early voting list. Over the decades, Arizonans have embraced mail-in balloting. Politifact reports that 89 percent of voters in Arizona cast their ballot before Election Day in the 2020 election.

The GOP lawsuit named Secretary of State Katie Hobbs and the recorders of all 15 Arizona counties.

Following the ruling, Hobbs released a statement on Twitter: “Today, a court denied the latest request from the Arizona Republican Party to turn back the clock on Arizona’s early voting system. Not only is voting by mail constitutional, it’s safe, secure, and has been used by Arizona voters for decades.”

Hobbs is the presumptive Democratic nominee for governor in the Nov. 8 general election.

Alexander Kolodin, the attorney representing the state GOP, said the party is considering an appeal.

Voters can sign up online to get a ballot by mail at azsos.gov/votebymail or send a written request form to their county recorder.

Katherine Locke and the Associated Press ontributed to this report.