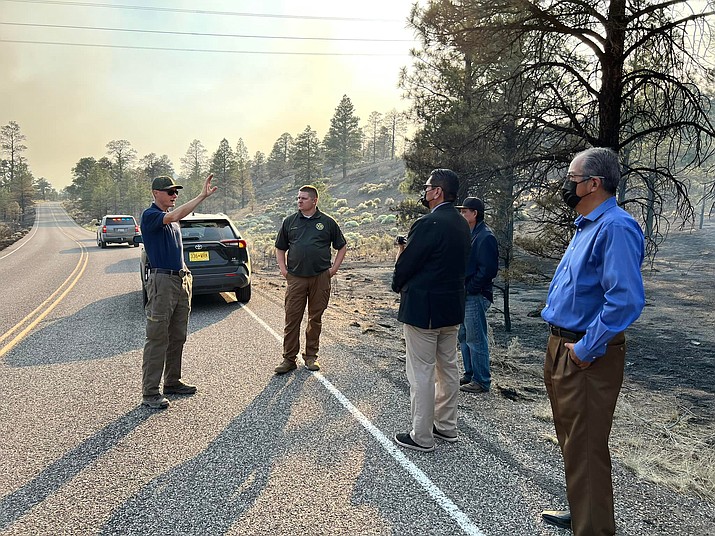 Navajo Nation President Jonathan Nez (center) listens as officials update him and others about the fires. (Photo/OPVP)

FLAGSTAFF, Ariz. — On June 15, Navajo Nation administration officials and Coconino Board of Supervisors Lena Fowler and Judy Begay met with Navajo residents affected by the Pipeline and Haywire fires located north of Flagstaff.

While the Navajo Nation does not currently have any communities under evacuation, health officials cautioned residents about heavy smoke in the surrounding areas, which will continue to be monitored by community health representatives who are also on standby to help transport/evacuate families to Twin Arrows if necessary. Smoke from both fires has reportedly reached areas as far as Denver, Colorado. 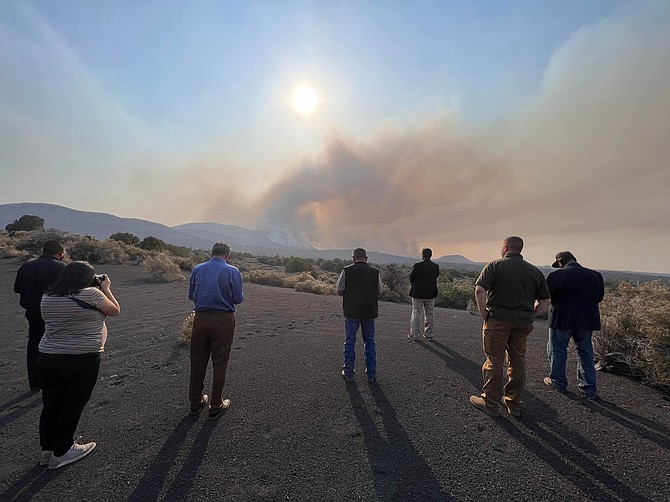 Navajo Nation President Jonathan Nez and others affected by the Pipeline and Haywire fires meet to talk about resources and short and long impacts. (Photo/OPVP)

During the meeting, Navajo Nation President Jonathan Nez thanked Fowler and all of the emergency response team members for their support and assistance.

“We stand with the Flagstaff community with our thoughts, prayers and resources. Through our unified efforts, strength, and prayers, we will persevere and get through this emergency situation. Our team will continue to assist the families and provide support,” he said.

As of last week, officials were transitioning from a 500-person Type 3 crew to a much larger Type 1 team through the Great Basin Coordination Center. They anticipated the fire lasting into this week.

Crews are also looking forward to battling the fire with lighter winds this week and expected precipitation this weekend.

As of June 20, approximately 2,195 residents in effected areas were evacuated due to the Pipeline Fire and 281 due to the Haywire Fire, with an additional 1,641 on pre-evacuation status.

Parrish said the resort is currently housing 59 families, Navajo and non-Navajo, and are working on identifying more families in need.

As fire containment efforts continue, officials anticipate extensive flooding in the Flagstaff area with the loss of vegetation similar to the 2010 Shultz Fire.

Sandbags have been used to mitigate flood damage before and communities will be hosting volunteer sandbag production events and other support efforts in the coming weeks, which can be found at the Northern Arizona United Way’s website at https://nazunitedway.org.

Highway 89 has reopened, but officials continue to urge drivers to use extreme caution in the area. The Navajo Department of Agriculture reported that the nearby Navajo-owned ranches, who have evacuated equipment and as many as 180 cattle.

The Haywire Fire is burning approximately seven miles from the boundary of the Navajo Nation and the Pipeline Fire is encroaching on Navajo Nation owned ranches.

The president's office also provided food boxes and bottled water to families impacted by the fire.

More information is available from Coconino County at https://coconino.az.gov/2926/Pipeline-FireHaywire-Fire