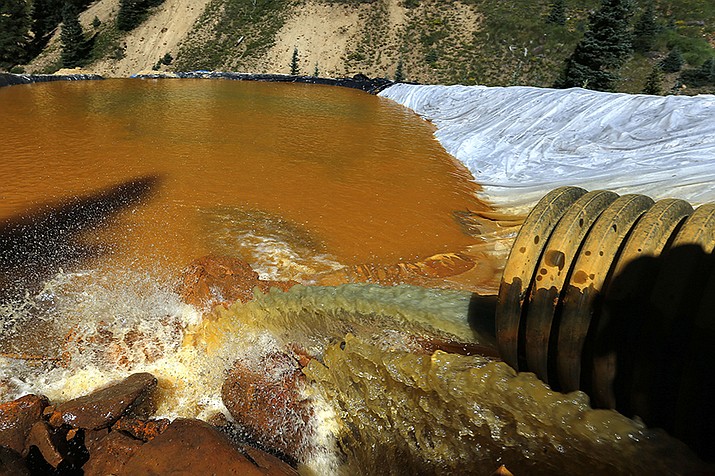 Water flows through a series of sediment retention ponds built to reduce heavy metal and chemical contaminants from the Gold King Mine outside Silverton, Colorado in 2015. New Mexico and the U.S. government have reached a $32 million settlement over the 2015 mine spill that polluted rivers in three western states. (AP Photo/Brennan Linsley, File)

ALBUQUERQUE, N.M. — New Mexico and the U.S. government have reached a $32 million settlement over a 2015 mine spill that polluted rivers in three western states.

Similar environmental accidents will be intolerable in the future as the region grapples with shrinking water supplies amid drought and climate change, the governor said June 16.

“Every drop is precious,” Gov. Michelle Lujan Grisham said during a news conference. “If we don’t have that water, we aren’t growing our own food.”

The spill released 3 million gallons of wastewater from the inactive Gold King Mine in southwestern Colorado, sending a bright-yellow plume of arsenic, lead and other heavy metals south to New Mexico, through the Navajo Nation and into Utah through the San Juan and Animas rivers.

Water utilities were forced to scramble and shut down intake valves while farmers stopped drawing from the rivers as the contaminants moved downstream.

The New Mexico settlement marks just the latest reached over the past year. Colorado and the Navajo Nation also have inked multimillion-dollar agreements to settle claims and sort out responsibility for continued cleanup at the Superfund site that was established following the spill.

Under the New Mexico agreement, the federal government will make cash payments for response costs, environmental restoration and efforts to mitigate the negative perceptions about the area’s rivers following the spill. Money also will go toward water quality monitoring and cleanup activities.

Lujan Grisham called the settlement a turning point for communities in the region.

“While the San Juan and Animas rivers have healed from the spill, it’s time for communities like Farmington, Bloomfield, and Aztec to do the same,” she said in a statement, saying the money is deserved in light of the federal government’s role in the disaster.

The state also received $11 million in damages from the mining companies, and the case against the federal contractors involved is pending.

Although the rivers are now safe for irrigation and other uses, state and local officials have said the stigma associated with the event has had lasting effects on the region’s economy.

The Navajo Nation finalized a $31 million settlement with the federal government this week. The tribe said the plume had traveled through an estimated 200 miles of the San Juan River, which it considers sacred.

Top Navajo officials traveled to the mine site and shared photos and video of the wastewater rushing downstream on social media.

Navajo Nation President Jonathan Nez said the tribe had pledged to hold accountable all those who caused or contributed to the spill. He added that he was grateful the federal government acknowledged the devastation that it caused.

While New Mexico and the Navajo Nation pursued separate lawsuits, the cases were consolidated and state officials said that remediation and restoration work will be coordinated.

State officials said a restoration plan will be developed with public input.