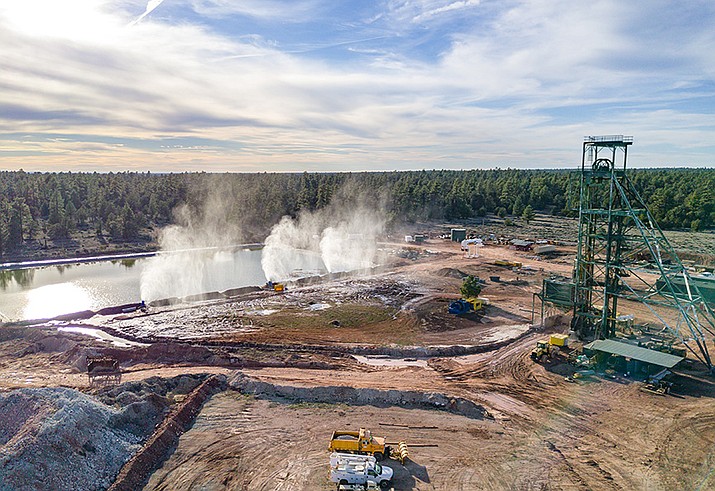 Pinyon Plain Mine, formerly known as Canyon Mine, uses water cannons to evaporate water from its holding pond near the mine shaft. A federal court ruled Feb. 22 that the mine could continue operations at their location approximately six miles from Grand Canyon National Park. (Submitted photo)

HAVASUPAI, Ariz. — The Havasupai Tribal Council has sent a formal letter of opposition to the Arizona Department of Environmental Quality (ADEQ) re-iterating its opposition to the Pinyon Plain Mine and requesting improved consultation and coordination with ADEQ to recognize the value of tribal traditional knowledge, as well as basic data-sharing on the mine’s operations and contaminants.

The letter, that was emailed to the ADEQ director May 27 documents consistent failures by ADEQ to consider the best science available and the well-founded concerns of Indigenous people who bear the environmental burdens of the Pinyon Plain Mine.

According to Tribal Councilman Stuart L.T. Chavez, the Havasupai Tribe has fought for decades to protect its water and traditional cultural lands from the harmful effects of uranium mining.

“Contamination from the Pinyon Plain Mine (formerly Canyon Mine) has already caused millions of gallons of precious water to be rendered unusable and wasted,” Chavez said.

The Pinyon Plain Mine is located less than 10 miles from the South Rim of the Grand Canyon.

According to the tribe, it poses risks to the drinking water, natural wonders and sacred cultural sites of the Havasupai Tribe.

“Every day the Pinyon Plain Mine threatens contamination of Havasu Creek, the sole water source that provides life to Supai Village. Our tribal homeland within the Grand Canyon and our ancestral lands are threatened as the Pinyon Plain Mine sits within the Havasupai Tribe’s Traditional Cultural Property (TCP), known as Red Butte —Wii Qdwiisa, the lungs of Mother Earth. Without this precious resource, our Tribe and homeland will be destroyed,” said Vice-Chairman of the Havasupai Tribe Edmond Tilousi.

In 2012, the Department of the Interior announced a 20-year moratorium on new uranium and other hard-rock mining on one million acres of federal land to protect the iconic Grand Canyon and the Colorado River. Pinyon Plain Mine was grandfathered in.

Information provided by the Havasupai Tribe