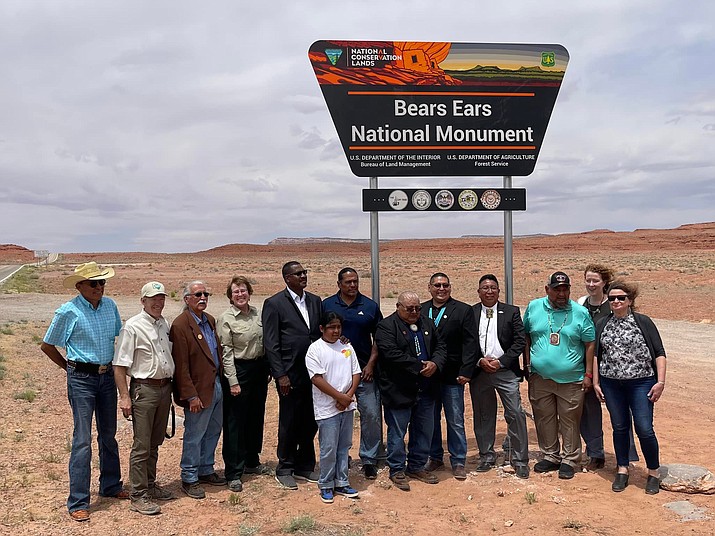 Federal and tribal officials came together June 18 to sign a co-operative agreement for the management of Bears Ears National Monument. (Photo/OPVP)

BLUFF, Utah — At a signing ceremony on June 18, the Bureau of Land Management, the U.S. Forest Service, and the five Tribes of the Bears Ears Commission formalized and celebrated their partnership for co-management of the Bears Ears National Monument.

After signing the cooperative agreement formally recognizing their strong working relationship, the parties travelled to Highway 261 to unveil the Bears Ears National Monument sign, which includes insignias of the Hopi Tribe, Navajo Nation, Ute Mountain Ute Tribe, Ute Indian Tribe of the Uintah and Ouray Reservation, and the Pueblo of Zuni.

“Today, instead of being removed from a landscape to make way for a public park, we are being invited back to our ancestral homelands to help repair them and plan for a resilient future. We are being asked to apply our traditional knowledge to both the natural and human-caused ecological challenges, drought, erosion, visitation, etc.,” said Bears Ears Commission Co-Chair and Lieutenant Governor of Zuni Pueblo Carleton Bowekaty “What can be a better avenue of restorative justice than giving Tribes the opportunity to participate in the management of lands their ancestors were removed from?”

To support the work that the five Tribes will perform under this agreement and through their representatives on the Bears Ears Commission, the BLM and U.S. Forest Service also announced they will provide resources to each Tribe through a separate process.

“We are so pleased to celebrate this unique partnership between Tribal Nations and federal agencies to manage and protect the remarkable and sacred Bears Ears landscape,” said BLM Director Tracy Stone-Manning. “This is an important step as we move forward together to ensure that Tribal expertise and traditional perspectives remain at the forefront of our joint decision-making for the Bears Ears National Monument. This type of true co-management will serve as a model for our work to honor the nation-to-nation relationship in the future.”

On Oct 8, President Joe Biden issued Proclamation 10285, which restored the Bears Ears National Monument, and recognized the importance of knowledge of Tribal Nations in managing the monument by re-constituting the Bears Ears Commission as established by President Obama in 2016, consisting of one elected officer each from the five Tribes.

“It’s an honor for the Department of Agriculture to sign this one-of-a-kind cooperative agreement,” said USDA’s Under Secretary for Natural Resources and Environment Dr. Homer Wilkes. “This agreement outlines a common vision for management of Bear Ears National Monument and protection of these sacred lands that are important to so many.”

Bears Ears National Monument has a rich cultural heritage and is sacred to many Native American Tribes who rely on these lands for traditional and ceremonial uses. There are also world-class opportunities for scenic driving, photography, rock climbing, hiking, biking, camping, paleontological exploration, and wildlife viewing.

More information is available at www.blm.gov/programs/national-conservation-lands/utah/bears-ears-national-monument.

Information provided by Dept. of Interior and OPVP