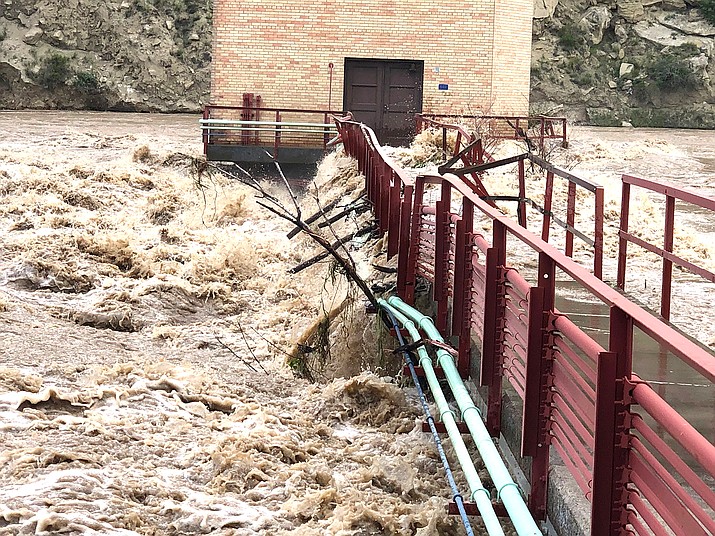 Flooding was seen at the Billings water plant June 15, forcing the city plant to shut down in Billings, Montana. (City of Billings via AP)

Residents in ravaged areas, meanwhile, cleaned up from the mess and braced for the economic fallout while the park remains closed at the height of tourist season.

The city of Billings had asked residents to conserve water because it was down to a limited supply when the Yellowstone River hit record high levels and triggered the closure of the treatment plant.

"We are aware yesterday's alert to the community caused a panic. That was never our hope," city officials said in a statement. "We have never witnessed a situation like the one we saw yesterday ... we did not know how bad it could get or how long it would continue."

The floodwaters continued to move downstream. By Friday morning the flooding was expected to reach Miles City in eastern Montana. Local authorities said low-lying areas along the river could be flooded but there was no immediate risk to the city of more than 8,000 people.

Officials had asked Billings residents Wednesday to conserve water because it was down to a 24- to 36-hour supply after a combination of heavy rain and rapidly melting mountain snow raised the Yellowstone River to historic levels that forced them to shut down its water treatment plant.

"None of us planned a 500-year flood event on the Yellowstone when we designed these facilities," said Debi Meling, the city's public works director.

The city of 110,000 stopped watering parks and boulevards, and its fire department filled its trucks with river water.

Normal operations resumed Thursday after the river level began to drop. It crested Wednesday at more than a foot above the previous recorded high in Billings in 1997.

The unprecedented and sudden flooding earlier this week drove all but a dozen of the more than 10,000 visitors out of the nation's oldest park.

Remarkably no one was reported hurt or killed by raging waters that pulled homes off their foundations and pushed a river off course — possibly permanently — and may require damaged roads to be rebuilt a safer distance away.

On Wednesday, residents in Red Lodge, Montana, a gateway town to the park's northern end, used shovels, wheelbarrows and a pump to clear thick mud and debris from a flooded home along the banks of Rock Creek.

"We thought we had it, and then a bridge went out. And it diverted the creek, and the water started rolling in the back, broke out a basement window and started filling up my basement," Pat Ruzich said. "And then I quit. It was like, the water won."

While the Yellowstone flood is rare, it is the type of event that is becoming more common as the planet warms, experts said.

"We certainly know that climate change is causing more natural disasters, more fires, bigger fires and more floods and bigger floods," said Robert Manning, a retired University of Vermont professor of environment and natural resources, "These things are going to happen, and they're going to happen probably a lot more intensely."

Closure of the northern part of the park will keep visitors from features that include Tower Fall, Mammoth Hot Springs and the Lamar Valley, which is known for viewing wildlife such as bears and wolves.

The rains hit just as area hotels filled up in recent weeks with summer tourists. More than 4 million visitors were tallied by the park last year. The wave of tourists doesn't abate until fall, and June is typically one of Yellowstone's busiest months.

Montana Gov. Greg Gianforte, a Republican, has faced criticism from Democrats and members of the public for being out of the country during the historical flooding.

"Before flooding began in south-central Montana, Governor Gianforte left the country late last week on a long-scheduled personal trip with the first lady," the governor's spokesperson Brooke Stroyke said in a statement Wednesday. "He is returning early and and as quickly as possible."

The statement did not say where the governor was. Montana's Lt. Gov. Kristen Juras signed an emergency disaster declaration on Tuesday and she was meeting with FEMA Administrator Deanne Criswell and state disaster and emergency services personnel in Red Lodge on Thursday.

The tourism season had started well for Cara McGary who guides groups through the Lamar Valley to see wolves, bison, elk and bears. She'd seen more than 20 grizzlies some days this year.

Now, with the road from Gardiner into northern Yellowstone washed out, the wildlife is still there but it's out of reach to McGary and her guide service, In Our Nature, is suddenly in trouble.

"The summer that we prepared for is not at all similar to the summer that we're going to have," she said. "This is an 80 to 100 percent loss of business during the high season."

Flying Pig Adventures, a Gardiner-based business that guides rafting trips on the Yellowstone River, will need to rely more on tourists staying in Montana now that roads into the park are impassible, co-owner Patrick Sipp said Wednesday.

It's a blow not unlike how COVID-19 temporarily shut down Yellowstone two years ago, reducing the park's June 2020 tourist visits by about one-third before they rebounded over the rest of that summer.

"We're definitely a resilient company, we've got a very tough crew," Sipp said. "But it's devastating. You just hate seeing stuff like that in the community. We're just hoping that we can get back out there relatively soon."

Meantime, as the waters recede, parks officials are turning their attention to the massive effort of rebuilding many miles of ruined roads and, possibly, hundreds of washed-out bridges, many of them built for backcountry hikers. Yellowstone Superintendent Cam Sholly said assessment teams won't be able to tally the damage until next week.

Kelly Goonan, an associate professor at Southern Utah University and an expert in national parks and recreation management, said rebuilding will be a long process.

"This is something we're definitely going to feel the impacts of for the next several years," Goonan said.