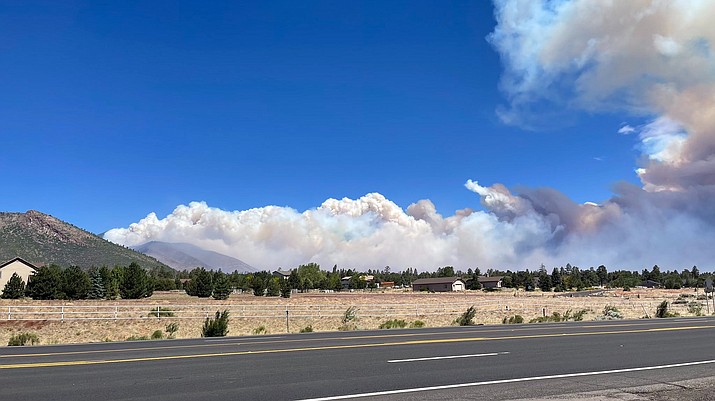 The Pipeline Fire has burned 20,20,178 acres north of Flagstaff as of June 14. (Photo/Arizona Department of Transportation)

FLAGSTAFF, Ariz. – A Type 2 California Incident Management Team 15 has assumed management of the Pipeline and Haywire fires north of Flagstaff.

The Type 2 team will manage both fires until a Type 1 team assumes control June 15.

While critical fire weather remains in effect due to dry conditions and high temperatures, lower wind speeds may allow for aerial operations throughout today and beyond.

In addition to using water and retardant dropping aircraft, crews will spend June 14 looking for opportunities to directly engage the fire with the intent to suppress the fire's edge and to keep the fire from entering communities as it continues moving in a northeast direction. Crews plan to utilize the 2010 Schultz Fire and recent Tunnel Fire footprints to their advantage.

The Coconino and Kaibab National Forests remains in Stage 2 fire and smoking restrictions. Information regarding fire restrictions can be found online at coconinonationalforest.us.

The Haywire and Double fires have merged and are now being managed solely as the Haywire Fire.

The Haywire Fire is currently 4,052 acres and is located 7.5 miles northeast of Doney Park.

The cause of the fire is unknown and under investigation but suspected as originating from a lightning strike from a storm days prior, according to fire managers.

The Coconino National Forest has closed nearly the entire northern portion of the forest from Interstate 40 toward the north. View the Closure Order and map here.

Additionally, Arizona Department of Transportation has closed a portion of Highway 89, which restricts vehicles from traveling north and south in the area of the fire. Check www.az511.com for status updates.

Smoke will impact homesteads northeast of the fire, including Navajo Nation.