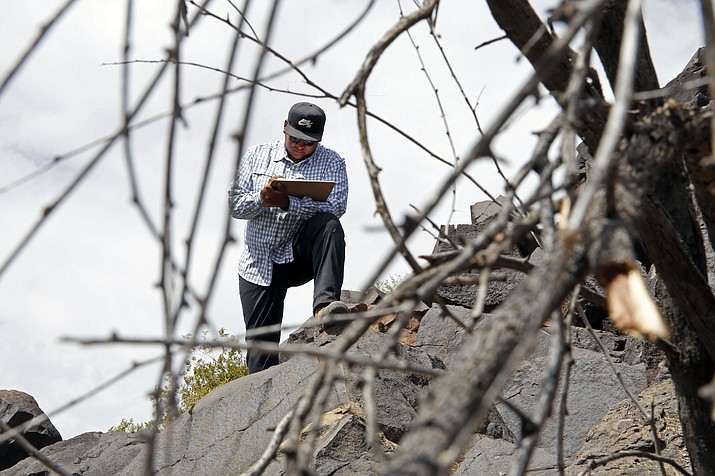 PHOENIX — Skylar Begay, tribal outreach fellow for Archaeology Southwest, is coordinating the work called Respect Great Bend, which would preserve an area important to Native American tribes in the region because of its ancestral landscape.

According to Archaeology Southwest, the Greater Bend of the Gila has tens of thousands of petroglyphs left by Native Americans, with later additions by Spaniards, Mexicans and Euro-Americans.

For more than a thousand years, families lived in villages along the lower Gila River and cultivated ancestral lands. The architectural structures left behind include pithouses, adobe and stone buildings, ballcourts and irrigational canals.

The area could be permanently protected by an act of Congress, making it a national conservation area or it also possible the president could declare it a national monument.

Begay, who is Navajo, said the Great Bend of the Gila remains important to 13 tribes including Tohono O’Odham, Gila River, Ak Chin, Zuni, Hopi and three Apache tribes. He said most tribes want continued access to the Great Bend of the Gila, while some are concerned about non-natives coming to the site, especially if they are going to cause damage.

“It’s an honor for me to learn about this importance for fellow indigenous nations. It’s deeply spiritual,” he said.

Begay said a lot of southern Arizona tribes lived there for thousands of years.

Additionally, the Gila River no longer flows on this section of the river.

Begay said there is a lot of history there because Indigenous people passed through the Great Bend of the Gila.

“It’s a landscape that reveals itself the longer you stay on it. It’s a rugged hot area. It’s not jaw dropping like the Grand Canyon. But there is the history and animals. There is also opportunities for solitude and reflection,” he said.

Begay’s outreach includes presentations to tribes whether it’s to their cultural offices or tribal councils. Some tribes want them to facilitate discussions with Congress.

Begay said just like there is distrust between tribes and the federal government, many tribes distrust archaeologists who have disrespected tribes in the past.

“I like Archaeology Southwest because they recognize that history and seek to not repeat that history. They are including indigenous people in their projects,” he said.

Begay even has a new name for this brand of archaeology. He said when archaeology works to include tribes and protect the land that it is preservation archaeology. He said the past archaeologists would not get permission from tribes to do their work and would damage the land, which included a lack of sensitivity toward ancestral remains.

His job is focused on conservation and advocating for the national land conservation system. He is also trained in restoring archaeological sites and how to build cases against people who damage sites.

“We’re not just protecting the sites for scientific values, but for a lot of tribal members who still go there today,” he said.

Begay would like to see more Native youth go into archaeology because he believes they can change the programs from within by just being there, showing what they believe and why they believe it. He said it’s about merging traditional beliefs with archaeology.

“If we are not there, it will stay the same,” he said.

Begay likes his job because he does something different every day and he is often working outside. He worked with the Conservation Corps for ten years starting when he was 17.

He said Covid-19 presented a lot of challenges for his job about preserving the Great Bend of the Gila.

“The tribes were hit harder than the other populations. Their protocols were also much stricter. A lot had to be done virtually and not all the tribes had the technology for the outreach,” he said.

Begay added that a lot of elders don’t speak English and are used to doing everything face to face.

Begay said when his grant ends in two years he believes he will have the opportunity to continue working at Archaeology Southwest or work in another area of conservation.

“I want to continue working with my people and other indigenous people. If I can find that balance with conservation I will,” he said.

Begay has taken the Sierra Club, tribal representatives and other groups into the Great Bend of the Gila to show them what they are protecting.

Begay serves as one of the campaign coordinators for the Great Bend of the Gila project as five of the staff members from Archaeology Southwest and five staff from the Wilderness Society work on the project together. Aside from keeping track of meetings, Begay works with the communication team as they do their outreach on you tube, Facebook and Twitter. They create content for their social media audience.