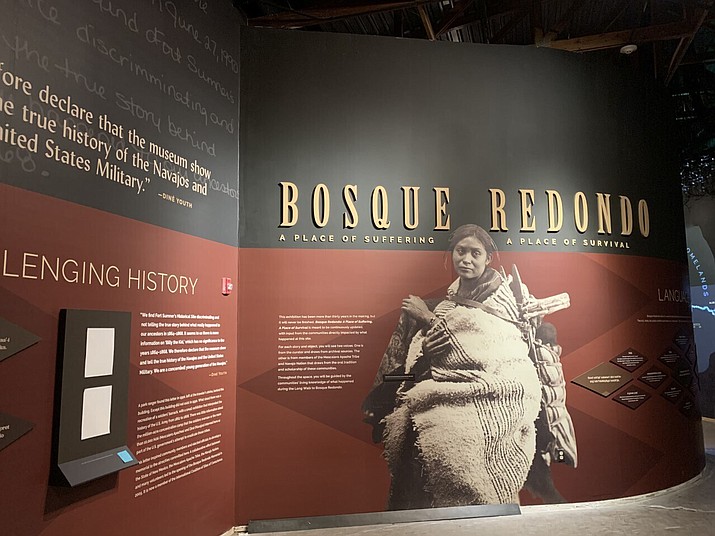 FORT SUMNER, N.M. (AP) — They named the area near this place Bosque Redondo, after a grove of cottonwoods near the river.

The Navajo imprisoned there called it "Hwéeldi." Some say that translates to "place of suffering."

It was near here, in Billy the Kid country, that the U.S. government attempted to strip members of the Navajo Nation and Mescalero Apache tribe of their language, culture and spiritual beliefs in the 1860s.

The government had already removed them from their native lands in New Mexico and Arizona, forcing them to take the Long Walk, as it became known — a forlorn journey on foot of several hundred miles in which disease and death became daily companions. And it wasn't just one journey; there were a number of long walks that took place over the years from different sites, including Fort Defiance in Arizona and Fort Wingate near Gallup.

Once the people arrived here, they found a sandy, desolate desert landscape unfit for farming and bereft of fresh water. They became prisoners, then survivors, struggling first to just live and then to get back home.

In the end, they succeeded, said Morgen Young, a historian who helped leaders of the Bosque Redondo Memorial/Fort Sumner Historic Site create the exhibition Bosque Redondo: A Place of Suffering...A Place of Survival.

Ultimately, Apaches fled the fortress-reservation one winter night in 1865, and Navajos negotiated a release and treaty in 1868 that helped them grow into an influential Nation, she said.

"This is a place of resiliency," Young told the Santa Fe New Mexican. "People were forced here, they survived, they returned home."

And that attitude is reflected in the exhibition, which drew more than 500 people on May 28, the official opening day. The exhibition, which draws on historical documents and oral accounts, takes the visitor on a journey back to the 1860s through today as it tells the story of people who ultimately found their way home and reclaimed their native ways.

It's not an easy story to tell — or to take in. Photographs, panels of text and audio presentations of the oral memories of those who survived the ordeal paint a portrait of a government determined to wipe out an Indigenous population it saw as a threat.

There are stories of soldiers shooting pregnant women who could not keep up on the walk; of elders and babies drowning in river crossings; of 12- and 13-year-old girls, fighting off starvation, selling their bodies to soldiers for a piece of cornmeal.

It's an exhibition that can easily prompt tears, said Santa Fean Diana Clanin, who said it was a "difficult decision" to visit the exhibition. As a docent for the New Mexico History Museum, she knows the backstory of the site.

"I didn't know if I could be able to handle it," she said, adding the exhibition showcases the reality of "man's inhumanity to man."

Wendy Raper, a Navajo woman from Clovis, said she also knows all too well the history of the Long Walk and the prison camp at Fort Sumner.

The 6,500-square-foot exhibition was decades in the making and started in large part because of a handwritten letter left at the site by some visiting Diné youth in June 1990. At that time, the historic site focused on providing information about the fort and the famous outlaw who was shot and killed in these parts — Billy the Kid.

The letter — on display in the museum — said the youth found the site "discriminating and not telling the true story behind what really happened to our ancestors in 1864-1868." It went on to demand museum officials "show and tell the true history of the Navajos and the United States military."

Change did not happen overnight, or even over the course of another 15 years. The Bosque Redondo Memorial, as it is now known, opened in 2005 but was just a facility with a few storyboards of information. But talks slowly began around the idea of developing a permanent exhibition — one that would include the input of Navajo and Mescalero Apache members.

Aaron Roth, historic sites manager for the memorial, said those behind the creation of the exhibition sat down for the first time with tribal community members in August 2016 to determine how best to present a difficult story that needed to be told.

Five years later, in the autumn of 2021, the memorial's leaders mounted what Roth called a "soft opening" of the current exhibition.

Among other features, the exhibition includes period and contemporary cultural artifacts, a touch-screen display of the 1868 treaty between the Navajo and the U.S. government that you can read or hear and a response room where visitors can record their reactions to the exhibition.

Many of those written responses, Roth and others involved with the memorial said, reflect personal stories, including from the survivors or children of survivors of the Holocaust. Several people interviewed at the site May 28 said it immediately conjured up images of Nazi Germany's persecution and genocide of Jews.

In that sense, you might say the Bosque Redondo memorial is the closest thing to a Holocaust museum that Native Americans have.

But Roth, like others interviewed for this story, said he does not believe the majority of general public knows the story behind the site or the Long Walk.

"For the longest time, even in (Fort Sumner) itself, the history wasn't even taught in schools," he said. "People who grew up here in the '60s and '70s said to me, 'This happened in our own backyard, and we didn't even know it happened.' "

Manuelito Wheeler, director of the Navajo Nation Museum in Window Rock, Arizona, and one of the Native American representatives who helped shape the exhibition, echoed that thought.

"It seems the majority of Americans have no idea that this even happened," he said. "When there's that unawareness, it leads to an uncaring attitude. Once someone understands what happened, their logic and emotions will help them understand that this was wrong."

He said that so many people see the story of the Long Walk and Bosque Redondo imprisonment as one of "resiliency" speaks to the fact "we've come a long way at the sacrifice of some of our culture, the sacrifice of human lives."

Beck-Ruiz — who left a number of personal messages on Post-it notes and on the many whiteboards in the exhibition expressing how it made her feel — summed up her sentiments in one succinct sentence as she prepared to leave the memorial.

"It shouldn't have happened, but it did," she said. "And it made our people stronger."