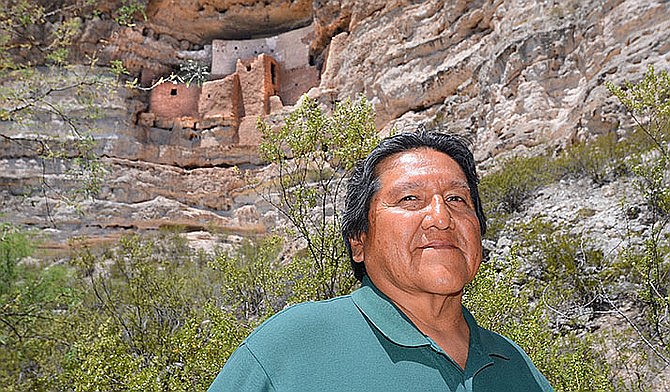 Montezuma Castle and Tuzigoot National Monuments Superintendent Lloyd Masayumptewa was at work at the Montezuma monument May 6. (Photo/Vyto Starinskas)

MONTEZUMA CASTLE — The superintendent of the Montezuma Castle and Tuzigoot National Monuments and the Interior Secretary of the United States have two things in common.

They both started their jobs a year ago and both are Native Americans.

Superintendent Lloyd Masayumptewa is Hopi from the Third Mesa village of Orayvi (Old Oraibi) and is of the Water-Coyote clan.

He was raised by his grandparents on the mesa, where they didn’t have running water while growing up about 50 miles southeast of Tuba City. They would get pails of water to fill trash cans or oil containers after monsoons.

Masayumptewa said growing up on the mesa helped him relate to his new job at Montezuma Castle because he used to wake up to similar architecture every day.

“The various luxuries that we have these days, we didn’t have those days,” he said.

“I take great pride in having the opportunity to work in one of the Hopi People’s ancestral homes,” Masayumptewa said when hired. “I joined the National Park Service to help preserve the legacy of my people’s existence and migrations in the Southwest.”

“His leadership skills and passion to preserve and protect our nation’s public lands and cultural resources make him a great fit to serve both of these parks,” Regional Director Mike Reynolds said at the time.

Dorothy FireCloud was the previous superintendent at Montezuma and Tuzigoot, Masayumptewa said. She is a member of the Rosebud Sioux Tribe of South Dakota. But there are only a handful of Native American superintendents at national monuments, he pointed out.

Masayumptewa spoke to The Verde Independent about his first year as superintendent and how getting a master’s degree at Northern Arizona University changed his destiny.

He now lives in Rimrock and says one of his priorities is to build more on-site housing for his federal employees at the Montezuma and Tuzigoot monuments because of the worker-housing shortage in the Verde Valley.

Montezuma Castle was built and inhabited between 1100 and 1400 AD and it was a permanent settlement, he said. But eventually, they left. Drought may be the reason.

Archaeologists have termed the people “Sinagua,” the predecessors to the Hopi, because of the types of wares that were associated with the area, Masayumptewa said.

Historically, he said his heritage goes back to those days at Montezuma Castle, but it’s difficult to tell if his clan was ever at the location. He can track his direct lineage about three generations.

As an archaeologist, he wants to identify who lived at the ruin. Sometimes clans leave identifiers.

“The thing I also want to entertain and answer is: Where did they go,” he asked.

Some people say, “They just vanished,” he said. “And that’s not true.”

“I am part of these people that lived here,” Masayumptewa said. “There’s people at home that feel the same way that I do.”

As quickly as people vanished, modern visitors are now appearing to view the historic ruins and the architecture at the Camp Verde and Clarkdale monuments. There will be a need for a little more development because “visitation is huge,” he said.

“A lot of people visit this place, and we just can’t accommodate the number of people that come in,” he said. “Particularly during spring break.”

He wants to bring in interpretive talks that discuss the perspectives of all the people who used to live in the area.

His first job was at the Flagstaff Area National Monuments near Flagstaff. He served as the deputy superintendent for the Southern Four Corners Group of parks, which includes Navajo and Canyon de Chelly National Monuments and Hubbell Trading Post National Historic Site.

Masayumptewa said he wanted to thank the NAU professors who helped put him on the right educational and career path.

Cultural anthropology professor Michael Vásquez “took me under his wing a little bit,” he said, introducing him to another archeology NAU professor, Chris Downum, who was in the preservation field. He said it was very rewarding for him to work at Hopi sites.

“It was significant for me,” he said.

“That I could actually go out to these places was the most rewarding thing for me because it fulfilled those talks that were provided for me when I was growing up by my grandparents and other elders, and where clans came from.”