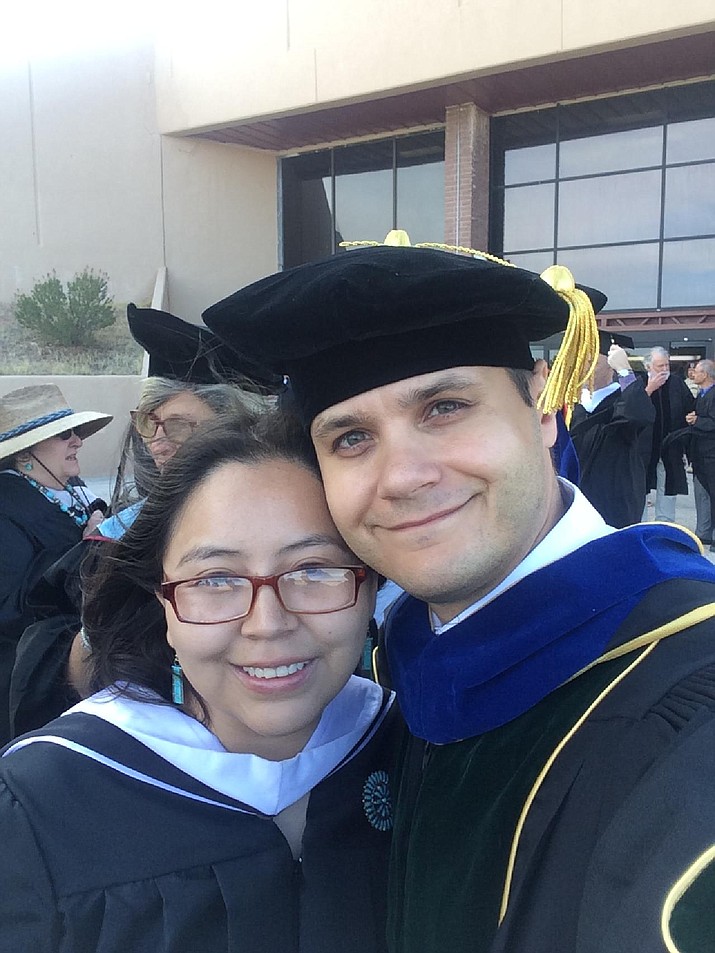 Oleksandr Makeyev and his wife, Rhiannon Sorrell, at the May 2018 graduation at Diné College. The two are faculty members at the college and he is from Ukraine and she is from Fort Defiance, Arizona. (Photo courtesy Oleksandr Makeyev)

TSAILE, Ariz. — There’s a man who calls Tsaile, Arizona, home, but his mind and heart are with family members and friends in his native country of Ukraine.

Oleksandr Makeyev, an eighth-year associate professor with the School of Science, Technology, Engineering and Mathematics (STEM) at Diné College, has been able to stay in contact with his loved ones in Ukraine sporadically, but worries if Russia ever captures the capital city of Kyiv, communications will be lost and so will he. The Russians invaded Ukraine about four months ago and have come close to overtaking Kyiv, but the Ukrainian military forces have been steadfast.

Makeyev thinks especially of his aunt, who he recently spoke to via videochat. The invasion doesn’t appear to be subsiding, as the Russians have situated themselves in the city of Mariupol and along locations on Ukraine’s eastern coast.

Makeyev, born and raised in Kyiv, arrived in the U.S. in 2006 to pursue a doctoral degree at Clarkson University in New York. He completed a post-doctoral fellowship at the University of Rhode Island. He said he was last in Ukraine in the summer of 2005.

“My dad and my aunt are still in Kyiv, along with sev-eral of my friends,” Makeyev said, saying their lives have been upended by the war. “They are surviving this war as best as they can. Needless to say, it is an unfortunate and difficult situation. I never got to visit Mariupol, which now I regret dearly.”

The rigors of academia

Like most people who work in academia, Makeyev has his hands full with the daily mental and physical grind of teaching, research and service responsibilities. But unlike his colleagues, he’s also dealing with the stress that comes from having family members caught up in the Russian incursion.

Makeyev said he doesn’t have family in the Ukrainian military, but said of the Feb. 24 invasion, “This is not at all the first time Russia attacked Ukraine, so this was definitely not a surprise. It was more of a gut-wrenching not again kind of feeling. Russia is against Ukrainian independence and has attacked us before.”

Makeyev noted that Russia has waged war against Ukraine nonstop since its occupation of Crimea in the southeast and through occupying portions of the Donbas region in 2014.

He said people around Diné College and elsewhere wish him and his family well — under the extreme circumstances. Makeyev is married to a Navajo woman, Rhiannon Sorrell, who is from Fort Defiance, Arizona, and whose Cheii’s family is from Tsaile.

Sorrell is an assistant professor with Diné College’s School of Arts, Humanities and English (SAHE), and an instructional and digital services librarian at the college.

“My husband and I have had frequent talks about the overlap in Ukrainian and Diné society, history and culture and a recurring topic is the resistance to imperialism by both. Since the annexation of Crimea (2014), this conversation has shifted to taking a stand against Russian imperialism by Ukraine and its Indigenous peoples, such as the Crimean Tatars. My heart is with all of our family and friends, my in-laws in Ukraine. I think about them everyday and their resilience and bravery through this unprovoked war. I have no words that would do them justice.”

Makeyev said it is very difficult to see on the Internet the images and videos of bombings, the sheer physical destruction and the millions of refugees forced to leave the country, but it is the constantly rising count of children killed by the invaders — currently more than 240, according to the Prosecutor General of Ukraine — that gets to him the most.

The local outpouring of support, empathy

Numerous fellow faculty members and family have donated money to humanitarian aid efforts and contacted their senators and representatives, urging them to proactively support Ukraine. Moreover, the Office of the President at Diné College and the Navajo Nation Office of the President, have each released statements of support and solidarity with Ukraine.

“They do wish us well and wish us the best,” Makeyev said of the college community. “My wife's very large family here on the Navajo Nation and our fellow faculty and administration at Diné College have been particularly supportive for which I'm extremely grateful. And, of course, we ourselves are also doing everything we can to help,” he said. “…this Russian invasion has forged an unprecedented unity among Ukrainians, which is one of the main reasons why the invasion is failing. The only solution is for outside countries to continue providing Ukraine with heavy weaponry, including planes, tanks and artillery — while simultaneously crippling the Russian economy with an oil and gas embargo.”

Asked if he could put words on the situation, Makeyev said, “The Russian invasion is abhorrent, while Ukrainians fighting back is nothing short of heroic.”

Diné College is a four-year tribally-controlled institution and the first Native American college of higher learning established in the U.S. Makeyev is the school’s sole administrator, faculty or student from Ukraine.

Since joining Diné College in 2014, Makeyev has authored and co-authored 11 papers in peer-reviewed journals, brought in three research awards from the National Science Foundation that add up to $600,000, and is the originator behind the college’s first-ever patents: one issued and two pending.