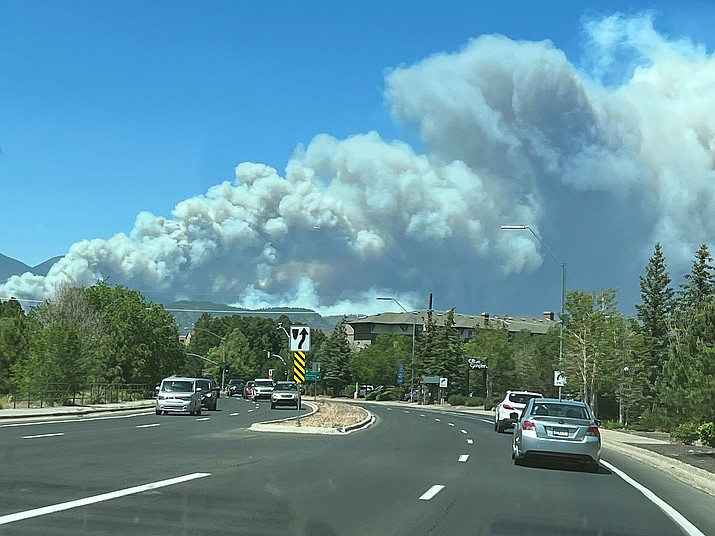 The Pipeline Fire is burning north of Flagstaff at 2:20 p.m. The fire is spreading northeast and has evacuations in place. (Wendy Howell/WGCN)

Latest updates: The Snowbowl area is in GO evacuation orders for the Pipeline Fire. CCSO has placed Mt. Elden Estates, areas of Timberline (South of Brandis to Elden Springs Road) and all of Doney Park in SET status. Make preparations now and be prepared to evacuate if needed.

Evacuations are in place for areas northwest of Flagstaff for a fire burning in the San Francisco Peaks.

Those in the West Schultz Pass Road areas including: FS420, FS557, FS576, FS522 and FS556, and Arizona Snowbowl are in GO status due to wildfire and are ordered to evacuate the area immediately by the Coconino County Sheriff's Office.

Areas east of Schultz Pass Road, north of Highway 180, including Mt. Elden Estates off FS 556 are in SET status and need to be prepared to evacuate at a moment's notice.

The Pipeline Fire was reported at 10:15 a.m. by a fire lookout and is currently several acres, but active on all sides and growing. Resources on scene in one hotshot crew, with another en route, one dozer, one water tender, three patrol units and six engines. Four air tankers and one Type 3 helicopter have been ordered.

Smoke is visible from areas near Flagstaff, and the wind is sweeping the smoke through Schultz Pass toward Doney Park.

Recreationists in the area should leave immediately, especially those in the area of Schultz Pass down to Ft. Valley Trailhead. More information will be provided as it is received.