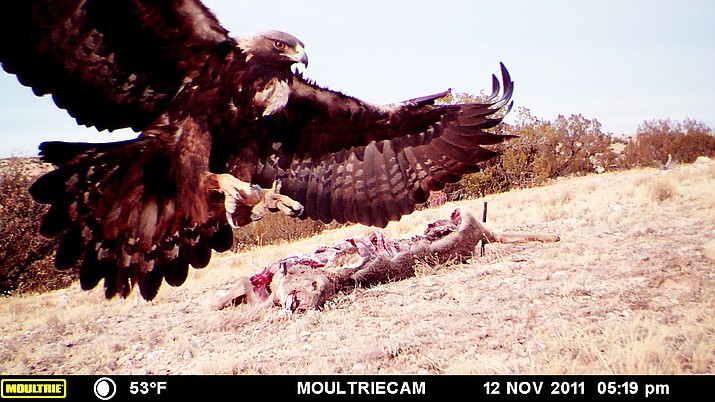 A wildlife camera on Babbitt Ranches captures golden eagles feeding on deer and elk carcasses placed in their territories by researchers. (Photo/Babbitt Ranches)

KYKOTSMOVI, Ariz. — Wildlife and Ecosystems Management Program Manager Darren Talayumptewa would like to see more federal funding for a program to establish an overall wildlife plan that would address the tribe’s cultural needs and balance those needs with western science management.

The Wildlife and Ecosystems Management Program is part of the Hopi Department of Natural Resources and Talayumptewa is seeking funding that would help the program get funds for a new Hopi Tribal Wildlife Management Plan.

Additional funding would be used to establish staff capacity to implement management objectives.

He said the funding from the PR Act is only set aside for states for wildlife management. The PR funds are not available to tribes.

However, he said H.R. Bill 2773 —Recovering Americas Wildlife Act, is funding which required the bill and funding to be placed in a sub-section or sub-account under the PR Act.

The H.R. Bill 2773 would allocate funding to states and other organizations, including funding allocation for tribes.

The bill establishes and funds a Tribal Wildlife Conservation and Restoration account to support tribes recovering and managing wildlife and plant species of greatest conservation need. Tribes are not required to provide matching funds. The bill would provide annual funding for tribes to address their wildlife, wildlife habitat, greatest conservation needs, establish a tribal wildlife management plan and provide building capacity needs. The money could also be used for other things bases on the tribe’s needs.

Talayumptewa said the Hopi Tribe has migrant U.S. Threatened and Endangered Species, which migrate through and occasionally spend some time on Hopi lands.

“We do not have any species that have established breeding territories, however, that could change in time. The Hopi Tribe’s greatest conservation needs are based on Hopi traditional species, which includes golden eagles, red-tailed hawks, and various migratory birds,” he said. “An established Hopi Tribal Wildlife Management Plan would assist the tribe in establishing those management objectives and covering other Hopi traditional species determined to be identified by the tribe.”

Talayumptewa said currently the Hopi Tribe has an ongoing study for Golden eagles, called the Prey Base and Satellite Telemetry study.

The Hopi Golden Eagle Breeding, Occupancy, Prey Base and Satellite Telemetry study has been ongoing since 2006. The study has been funded by USFWS Tribal Wildlife Grants and Hopi WEMP. Talayumptewa said the intent of the study is to provide justification to the USFWS and other NGO’s that the Hopi Tribe is not impacting the species in the Four Corners Plateau. The study is also part of the Hopi/Navajo Intergovernmental Compact Agreement.

Talayumptewa said the Hopi Tribe is noticing the impacts of drought and global climate change on the species.

“It is affecting the prey base, habitat and notable changes in the breeding habits of some breeding areas,” he said.

“We need to balance the western science and Hopi traditional way of managing to help the eagles,” he said.

“As noted earlier, a change in breeding habits, birds are breeding a little later in some areas. The wind storms we experience may have some impacts and with the ongoing drought we are noticing a change to the habitat within various breeding areas,” he said.

Talayumptewa said the Hopi Tribe is in full support of the bill that would result in more funding. He said the chairman, vice-chairman and Hopi Tribal Council are aware of the bill.

“They fully support the efforts the tribal coalition and of the NGO’s that have worked to ensure the inclusion of the Tribal Title into H.R. Bill 2773. We also had the assistance of the Hopi Tribe’s lobbying firm, Clause Law P.L.L.C. to provide our voice in Washington D.C. and support our efforts,” he said.

Talayumptewa said in the very early stages when the tribal coalition was started, the group asked for each tri-member to reach out to their respective state congressional representatives.

“I reached out to Congressman [Tom] O’Halleran in the early stages of discussing the Tribal Title into HR Bill 2773, and he was aware of the proposed bill and confirmed that he would be one of the co-sponsors to the bill,” Talayumptewa said.

“The AZGFD did meet with some of the Arizona tribes to discuss the inclusion of the Tribal Title in HR Bill 2773 and we all were in support, as this would help wildlife across the entire state of Arizona,” Talayumptewa said. “This would be a win-win situation for our state and the department and commission felt this would benefit all Arizona wildlife.”