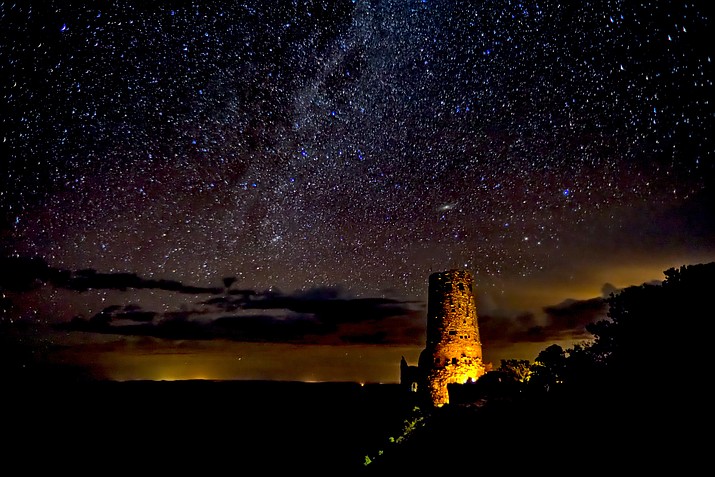 During the 100th anniversary of the park in June 2019, Grand Canyon National Park was certified as an International Dark Sky Park. (Photo/Adobe Stock)

By protecting night skies, the National Park Service protects more than the pretty views of the stars; it preserves wilderness qualities that animals and humans depend on for life.

Despite this effort, the National Park Service is concerned about the intrusion of light from outside sources, incluidng gateway communities.

Light trespass as defined by the IDA is “light falling where it is not wanted or needed,” and is a concern quickly pointed out by astronomers and enthusiasts.

“The biggest issue impacting Grand Canyon’s night skies (is) the surrounding communities,” said Rader Lane, a park ranger who’s speciality is night skies at GCNP. “That’s the next phase we need to be examining, because light pollution doesn’t follow political borders … (we’re) looking at Tusayan, Cameron, Tuba City and Williams to work with them through the knowledge we’ve gained in our process of becoming a dark sky park, helping them become dark sky communities.”

There are indications of tribal interest in dark sky designation, particularly for tourism revenue. A 2019 study at Missouri State University found potential for $6 billion in economic development and the creation of 10,000 new jobs across the Colorado Plateau from night sky visitation.

However, not all tribes want the impacts of increased visitation and other components should they become certified, according to John Barentine, of Dark Sky Consulting LLC.

Some believe Grand Canyon National Park is uniquely qualified to lead such discussions because of its wide knowledge and could serve as a model for other parks.

Barentine said. “It’s similar in some respects in having a few places with a lot of development in the park and (I) referred them to the GCNP example and said, ‘Look at their application to IDA and that’s what to emulate.’”

“If you go to Mather Point (in GCNP), you can see Las Vegas, no problem,” he said. “It’s not very prominent. It’s very low to the horizon. (But) Vegas is growing and it has the potential to be more significant in future years.”

The light from Las Vegas is not only visible at Grand Canyon, but also other National Park Service units.

“I’ve also seen the light from Las Vegas at Great Basin National Park in Nevada, which is even further away. It’s like a glow on the horizon,” Barentine said. “That’s suggestive that the reach of light from cities is hundreds of miles easily.”

According to the Oct. 2015 Night Sky Quality Report from GCNP’s South Rim Visitor Center, glow can be seen from Phoeni, Prescott and Las Vegas, but there is alsosignificant glow from the Grand Canyon Village area.

“The future of (GRCA) skies depends on a regional effort to protect the sky shed of the park - and that ultimately involves all of these communities. Plus what happens in Phoenix and Las Vegas,” said Ruskin Hartley, executive director of IDA.

A lot of it has to do with external pressures that are put on them by lighting coming from cities as the population in the west continues to expand, Barentine said.

“The issues are rarely at the level of the park or the public land,” he said.

Other challenges for dark sky parks is their limited ability to influence policy to curb light trespass from different local and state jurisdictions, according to Barentine.

The issue of different jurisdictions is compounded on the national level because there is no federal legislation for how light is allocated across the landscape. However, there have been discussions at the international level with some United Nation bodies looking at light pollution as a regional issue with work coming up through the conditional peaceful use of outer space, identifying international aspects of light pollution control, according to Hartley.

Barnetine said he is also concernabe about future growth in Tusayan.

“They have had an eye towards expanding the footprint of the town to increase the capacity to cater to tourism, which is understandable,” Barentine said. “There’s not some kind of intrinsic conflict between land development and dark skies. But usually what happens is there’s not much attention to outdoor lighting and its impact on adjacent public lands. There’s a way to make an expanded Tusayan compatible with dark skies at Grand Canyon, but it would take very deliberate action on the part of the town to make that happen.”

Coconino County and the U.S. Forest Service were unable to locate studies on the subject about gateway communities, however, the NPS has completed seven night sky quality reports on the South Rim of GCNP since 2007. The last report was completed in 2015.

There are tools to estimate based on data collected by government satellites which measure light from Earth’s surface (radiance) daily and is available on a monthly average basis back to 2012. This is completed through the website www.lighttrends.lightpollutionmap.info.

The app called “Radiance Light Trends” allows anyone to quickly select a region or a site and analyze the trends in light emissions observed by satellites.

The trendline of light output of GCNP gateway communities from 1992 to 2021 shows that Williams has increased 8.14 percent annually, Grand Canyon Village has decreased since 2016, and the city of Page has also been slowly decreasing.

There are some big caveats about satellite data. It’s basically blind to blue light, which is emitted much more by LED lighting compared to earlier technology. So cities may only appear to be getting dimmer as LED use spreads. Further, the satellites tend to measure lights on throughout the night and miss those only on at dusk and dawn, according to Barentine.

Tusayan light output based on that data has been increasing nearly 9 percent per year since 2020 after remaining flat from 2013-2020, according to Barentine.

“I wouldn’t completely hang my hat on that result, but it is suggestive that something in Tusayan is changing in terms of outdoor lighting that is making the town brighter,” he said.

“We’ve had codes implemented for a very long time to make us dark sky compliant,” she said. “All of our codes meet that. The town started a process long before I was mayor, to finish the actual compliance to become dark sky compliant and there were some deficiencies there, buildings that maybe don’t have the right fixtures.”

Tusayan has made recent strides in compliance with lighting improvements on Long Jim Loop and RP Drive. The town has made a large impact on Long Jim Loop. Material has been hauled on that route to the sports complex. The town has used around $30,000 in funds through the state of Arizona’s Highway User Revenue Fund (HURF) to improve lighting on Long Jim Loop, with solar lights installed with an eye toward dark sky compliance, according to Tusayan Town Manager Charlie Hendrix.

Additionally, the town is in the process of completing an inventory of its lights and Tusayan’s attorney is currently drafting upgrades to the town zoning code,

The draft should be presented to the city council in August to review and discuss whether it will adopt the changes, she said.