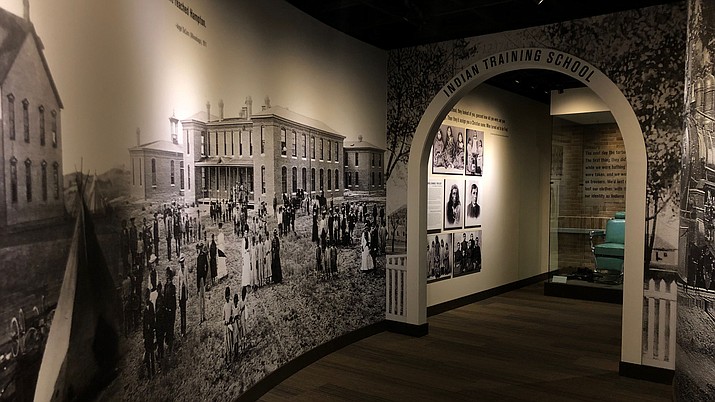 In a hallway leading to “Away From Home,” a panorama depicts the history of American Indian boarding schools across the country. (Photo by Julian Hernandez/Cronkite News)

WINDOW ROCK, Ariz. — A fact-finding commission of the Episcopal Church will research the history of the denomination's role in operating boarding schools for Native American children -- part of a system the church now acknowledges was rooted in white supremacy and caused generations of trauma.

The denomination's General Convention, meeting in Baltimore, approved the commission's formation by acclamation in votes July 8 and July 9 in its two legislative houses.

The votes followed a series of emotionally potent comments from Indigenous and other church members at the convention.

Bishop Carol Gallagher, regional canon for the Central Region of the Diocese of Massachusetts, spoke in favor of the measure and was encouraged by the vote. Gallagher, who is Cherokee, told the convention that her grandfather had attended a boarding school and her family witnessed how the schools had badly damaged Native children's ties to their families and tribes.

The reckoning with the boarding school legacy is "going to take a long time, because we're going to have to listen to a lot of people," Gallagher said in an interview. "My hope is people won't draw back from listening. It may be painful to hear, but it also can be life-giving."

The Episcopal Church and other denominations operated many of the boarding schools established in the 19th and 20th centuries under a U.S. policy that sought to sever Native children from their families, languages and cultures and to assimilate them into the mainstream Christian society.

While students' experiences at the schools varied, with some reporting positive experiences and others horrific abuse, the overall system was designed for the forced assimilation of Native children.

The multi-point Episcopal resolution establishes a fact-finding commission to look through church, government and other archives about the boarding schools and to share its results. It encourages individual dioceses to do similar research and listen to the stories of school survivors.

"Our church has some history in the colonization of our peoples," Ron Braman of Idaho told fellow members of the General Convention's House of Deputies before it approved the resolution. "You see the pain that our people are still enduring."

He said several members of his family went to boarding schools.

The investigation is "a brave thing for us to do, but I believe it's something that we need to do," said Braman, who is affiliated with the Eastern Band of Shoshone.

It's the latest in a series of reckonings by religious groups over the legacy of such schools in North America. Later this month, Pope Francis is scheduled to visit Canada, where he is expected to apologize for the Catholic Church's role in operating residential schools there for Indigenous children. He made a similar apology to a visiting Indigenous delegation at the Vatican in April.

The U.S. Department of Interior in May issued a report that acknowledged the "traumatic and violent" means that were used in the system. It identified more than 500 student deaths but said further investigation would likely show thousands of deaths due to disease and other causes. The reported discoveries of hundreds of graves near former residential schools in Canada since 2021 has prompted an unprecedented reckoning with the system's legacy in North America.

In all, more than 400 boarding schools operated in the United States from the 19th to mid-20th centuries before the system ended, according to the Interior report.

The Episcopal Church operated at least nine boarding schools, according to a database compiled by the National Native American Boarding School Healing Coalition.

"Over and above that, many parishes donated to support these schools," Gallagher said. They may have thought they were helping, she said, but didn't realize "the impact of removing children from their families and their way of life, and destroying identities."

Ruth Johnson, a member of the House of Deputies from the Navajoland Area Mission in the Southwest, told the convention that she still bears the traumas of attending boarding schools, including one where she was beaten.

"I could have easily been one of those that didn't make it home," said Johnson, who is Navajo. "To this day, I still have a hard time talking about it."