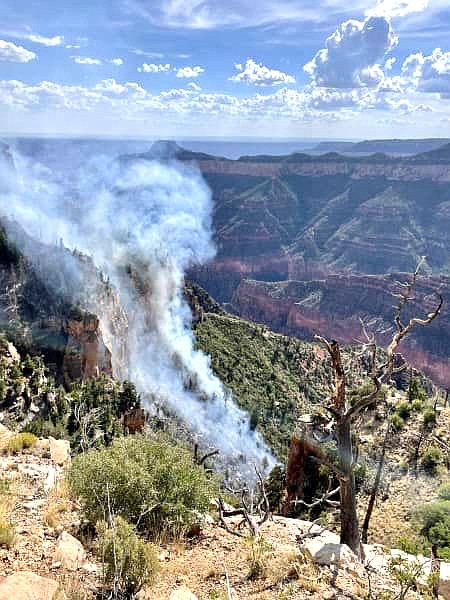 An aerial view of the Dragon Fire on the North Rim July 21. (NPS Photo/M. Brown)

GRAND CANYON, Ariz. — As of July 22, the Dragon Fire, located on the North Rim of Grand Canyon National Park, grew to approximately 733 acres and has 47 personnel assigned.

The fire spread across the planning area with low to moderate fire behavior. The lightning-caused fire began July 17 and is being allowed to fulfill its natural role in a fire-dependent ecosystem.

Fire personnel moved along the W-1/Point Sublime Road and Tiyo Point Trail to remove downed fuels ahead of the advancing fire. Removing this excess vegetation from the forest floor reduces the amount of fuel available to the advancing fire which helps to keep fire behavior at low to moderate intensity. Crews will continue to patrol the fire perimeter, improve line, and remove hazard trees.

The weather will continue to be hotter and drier than normal with chances of precipitation and monsoonal weather beginning Sunday, July 24. Light winds are expected out of the northwest/southwest at 15 mph. The Dragon Fire poses no danger to structures or local infrastructure on the North Rim. Smoke from the Dragon Fire will be visible from the North Rim developed area and along the South Rim.

Closures remain in effect for the Tiyo Point Trail and 1.5 miles east and west of the trail within Grand Canyon National Park.