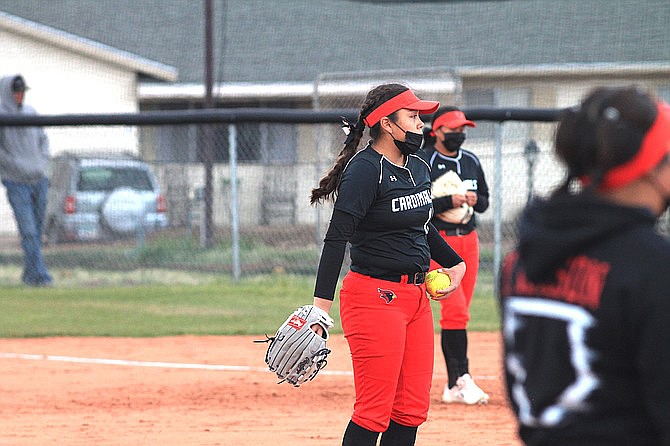 “Being a private school where most students excel in academics, you don’t typically hear about sports signings,” Adams said. “But Gabby broke the mold. She’s a very good student and, obviously, a very good athlete. We’re happy for her.”

Simpson recorded hits and strike outs in every game played last season, ending the season with a .249 batting average. She said she’ll focus purely on softball this fall in Kansas.

“I’m very happy and very excited at moving on to the next level of academics and sports,” she said. “I will miss the school and my teammates.”

The Lady Cardinals ended the season 13-8, 6-4. Simpson said the most memorable games for her were those with 1A North foe Williams High.

“We always played tough in the regular season and the playoffs,” Simpson said of both teams. “The games were always very close and many times decided by one, two or three runs.”

The Lady Cardinals were ousted from the 1A North playoffs this season after losing 3-0 to Superior a few months ago. Throughout the season, the top teams in 1A North were Williams, Joseph City and Saint Michaels.

The award was made possible by the financial support from Eve’s Fund for Native American Health Initiatives. Simpson, who is half-Navajo, received the St. Katharine Drexel Award – a $1,000 scholarship given to a student who demonstrates personal dignity and respect for the rights of others.

Simpson said when she graduates from Independence Community Junior College, she’d like to continue school and pursue a four-year degree in criminal justice.