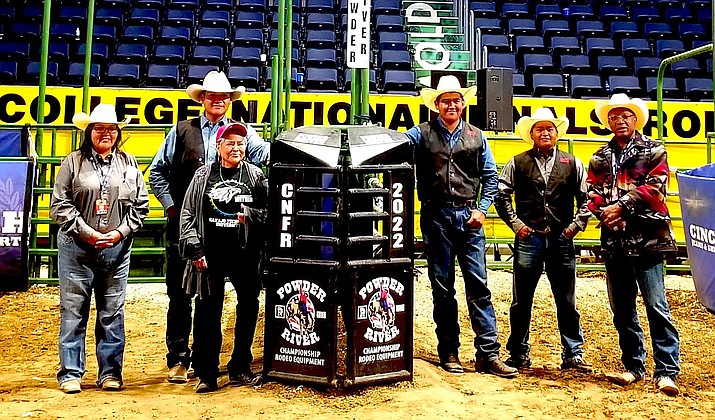 The duo performed exceptionally well, both individually and as a team, at the rodeo that featured approximately 400 of the top college cowboys and cowgirls competing for a national championship. NTU finished in 28th place with 120 points at the 10-day event held at the Ford Wyoming Event Center.

“I’m impressed with our students Rooster and Hiyo Yazzie for their accomplishments and representing Navajo Technical University at the CNFR,” said NTU Provost Dr. Colleen W. Bowman in attendance at the event. “They both demonstrated their talents remarkably as student athletes on a grand stage and we at NTU are grateful to have them as our students. It was also a pleasure to see other Navajo students competing at the CNFR. They all were extraordinary and represented our nation with excellence.” 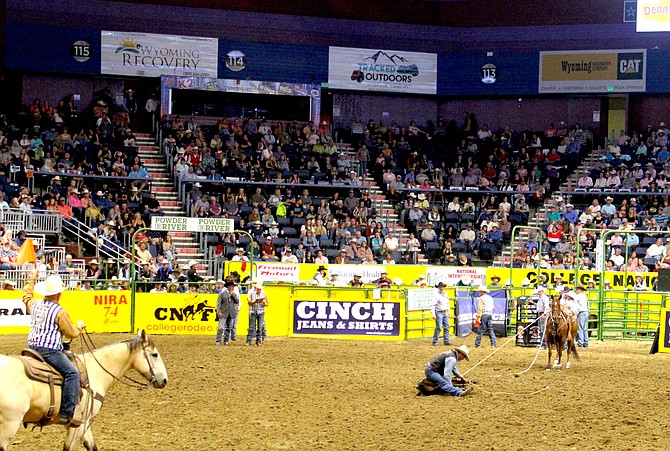 New Mexico cowboy Hiyo Yazzie experienced some trouble with his draw causing him to be excluded from the championship round. (Photo/NTU)

Hiyo Yazzie had an outstanding performance in the tie-down roping event leading to the championship round. He roped and tied his calf in 8.7 seconds that earned him second place in the second round of the rodeo, and was shy of advancing to the short round with his 20.9 second time in the third round. He placed 16th overall while also serving as the header in the team roping event by invitation by New Mexico State University’s healer Jonathan Carrizal. The team was unsuccessful of placing.

NTU steer wrestler Rooster Yazzie had an impressive performance in the third round putting his steer down in 4.6 seconds for a third-place tie in the round. He was assisted by teammate Mathew Jodie, who did not qualify, but hazed the steer for Yazzie. Rooster received no times for the first two rounds and finished 36th at the event.

NTU cowboys were unable to advance to the championship round where the top 12 rodeo athletes competed for the coveted national title for each of the nine events featured. “It was a great experience for me to compete among the best in the country in college rodeo and I’m thankful to have this opportunity,” said Rooster Yazzie in an interview with NTU radio station KCZY. “To compete at this level, I have to thank Navajo Technical University, my family, and everyone who supports me in this sport.”

“Rodeo is a popular sport on the Navajo Nation and we appreciate being represented nationally by Rooster and Hiyo. They deserve the recognition,” said NTU President Elmer Guy as he mentioned the athletes and the university being acknowledged at the CNFR. “I would also like to thank our NTU radio station KCZY manager Cuyler Frank for broadcasting the event. This was a first for our institution. We continue to make strides for our students and I’m grateful for everyone making an effort to grow our institution for our students and communities.”

The NTU timed event cowboys both qualified among top athletes from the Grand Canyon Region of the National Intercollegiate Rodeo Association where the top three of each rodeo event are selected to compete at the CNFR.

Rooster Yazzie finished the 2021-22 season in the steer wrestling event in third place with 671.5 points and sixth in the all-around standings.

Hiyo Yazzie also finished third place of the tie down roping with 471 points and seventh in the all-around standings. Altogether, the NTU Men’s team completed the season in fourth place with 2449 points in the Grand Canyon Region.

Other Navajo College rodeo athletes at the CNFR from the Grand Canyon Region were Northern Arizona University student Stade Riggs, who competed in the saddle bronc event and finished in 12th place with 197 points. Central Arizona College bull rider Brad Moreno completed the event in 8th place on one qualified ride with 68.5 points and competed in the team roping with teammate Jaken Todacheenie of Northland Pioneer College. Kiara Begay was also at the event for University of Arizona in the Barrel Racing event finishing 12th for the event.