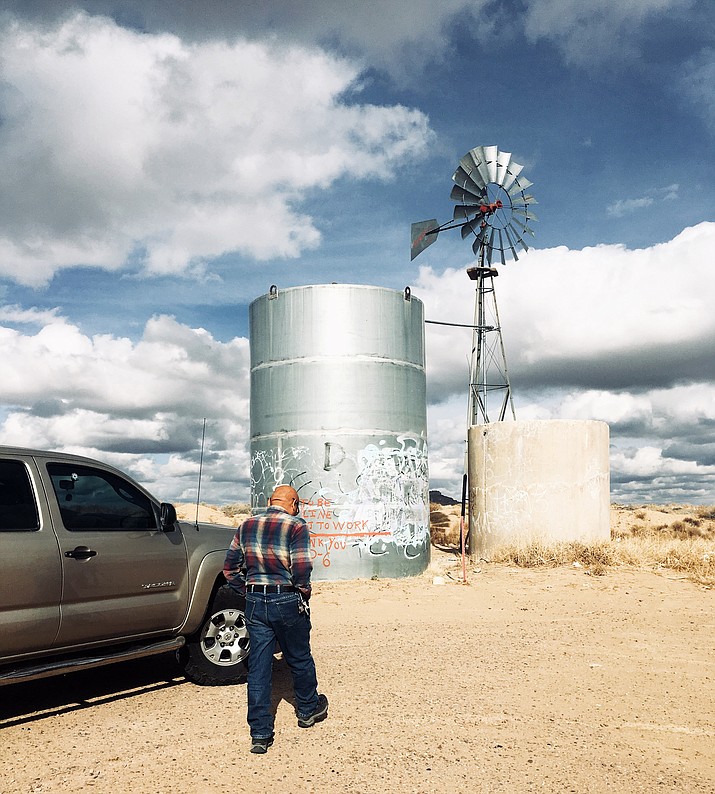 Mervin Yoyetewa, who lives on First Mesa on the Hopi Reservation, approaches a windmill water pump, which is often empty. A growing concern for Yoyetewa and many Hopi families is the concentration of arsenic getting higher as water levels decline in the aquifer. (Rowan Lynam)

KYKOTSMOVI, Ariz. — Following the completion of the Hopi Arsenic Mitigation Project (HAMP), the general public is invited to celebrate with the Hopi Tribe on Saturday, July 30, at the Hopi Veterans Memorial Center.

The completion of the project comes following years of preparation. The Hopi Tribe has been suffering from arsenic contamination in its water supply since the 1960s when the Bureau of Indian Affairs first installed its drinking water system.

In 2002, the Environmental Protection Agency’s safe drinking water standards changed, resulting in water of six of the Tribe’s villages exceeding safe levels by as much as three times the allowable contaminants.

“It’s emotional to know that these communities are finally being served,” Hopi Tribal Chairman Timothy Nuvangyaoma said. “It’s difficult to put into words exactly how we feel. To be able to finally have so many people have safe, potable drinking water is an incredible feeling. I often think about this milestone that we’ve reached; it’s been a long time coming.”

The Tribe is working with several partners to curb this public health crisis including Hopi Utilities Corporation, the Indian Health Services, the Environmental Protection Agency, the Bureau of Indian Affairs, Clause Law P.L.L.C., Daniel B. Stephens & Associates and WW Clyde.

“It’s cliche, but it comes down to the phrase, ‘water is life,’” Nuvangyaoma said. “Everything that Hopi does and is, is connected culturally and traditionally to water. It is always reflected in our prayers. We are fighting to preserve life in the form of water, and I think that really resonates.”

Looking ahead, the project is designed to increase the system capacity through the construction of additional water wells, water main extensions, and pressure upgrades, thereby increasing the range of pumped water. Construction is underway to extend regional water availability to Keams Canyon.

Guests are invited to participate in the following events during the July 30 event:

• Program at the Hopi Veterans Memorial Center at 9 a.m. MST.

About the Hopi Tribe

The Hopi Tribe is a sovereign nation located in northeastern Arizona and has government-to-government relations with the United States federal government. Individual villages retain autonomy under the Hopi Constitution and Bylaws. The reservation occupies part of Coconino and Navajo counties, encompasses more than 1.5 million acres, and is made up of 12 villages on three mesas.