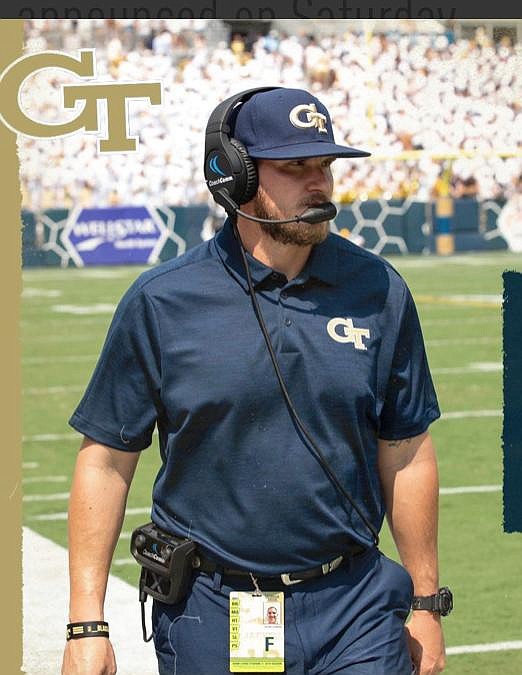 Jason Semore is a former Ganado High School football player who now is a linebackers coach at Georgia Tech University in Atlanta. Semore was a multi-sport athlete for the Hornets. (Photo courtesy Jason Semore)

GANADO, Ariz. — He’s a household name in sports around sports Ganado, Arizona. These days, though, he’s passing his football knowledge on to linebackers at Georgia Tech University in Atlanta. The school is a major research institution and a member of the Atlantic Coast Conference.

There’s still life in the throwing arm. His legs feel good. But that’s not the focus of Jason Semore.

“I played football, baseball, track and field and I wrestled at Ganado High School,” said Semore, 40, who was part of the Hornets’ football teams that won a string of championships in the late 1990s and early 2000s. “My first sport was baseball, but I was always around football because my dad was always a coach.”

Semore was born in Portland, Oregon, but grew up on the Navajo Nation in Ganado. His grandparents lived in Ganado in the 1970s and he lived on the reservation for some 17 years. He played linebacker and running back in football, catcher and third base in baseball and ran sprints in track. In football, Semore preferred defense and likes coaching defense.

“My preference has always been defense as a player and a coach,” Semore said. “Defense is more reactive in nature and I liked to play the game emotionally and there was always less thinking for me. On the other hand, offense is more execution and assignment based. Defense has those principals, but it’s based on effort and technique.”

He was not drafted into the NFL after college, and said he modeled his style of play on the football field after linebackers Dan Morgan of the Carolina Panthers and Hall of Famer and native New Mexican Brian Urlacher of the Chicago Bears.

“My father was my inspiration,” Jason said. “He taught me the value of team and about being a part of something bigger than myself. He was always a coach, so I got to see first-hand how investing in other people and team dynamics lead to shared joy in life. I was also raised to see the correlation between life and the game of football and how the process of preparation leads to success in both.”

Reflecting on growing up in Ganado, Jason said it doesn’t really seem like an impossible journey to go from little and mostly unheard of Ganado to the big time college football ranks.

“I never thought of it that way,” he said. “I was raised not to be result-oriented in my approach. Results are a by-product of daily habits and choices. Over time, if you have success it is ultimately because of the people you’re around and how disciplined you are with your day in and day out habits. I have always tried to surround myself with good people, and make disciplined choices that reflect my goals. If a person can do that on a consistent basis, where you’re from is irrelevant.

“There are positives and negatives to every location, some have more opportunities than others available to them. Growing up on the ‘rez’ was a blessing because there are not a lot of distractions outside of athletics and academics, which allowed me to make easier choices when it came to being disciplined and focused as a young athlete which carried over into my professional career," he added.

The coaching profession for Jason is not without its share of memories.

“When I was a coach at Tulsa (4-3), we played the University of Notre Dame (4-4) at their home stadium in Indiana (2010). It was my first true experience on one of college football’s biggest stage in front of 90,000-plus fans on national TV. We were big underdogs and won the game. It was the biggest win (28-27) in school history and an unforgettable day.”