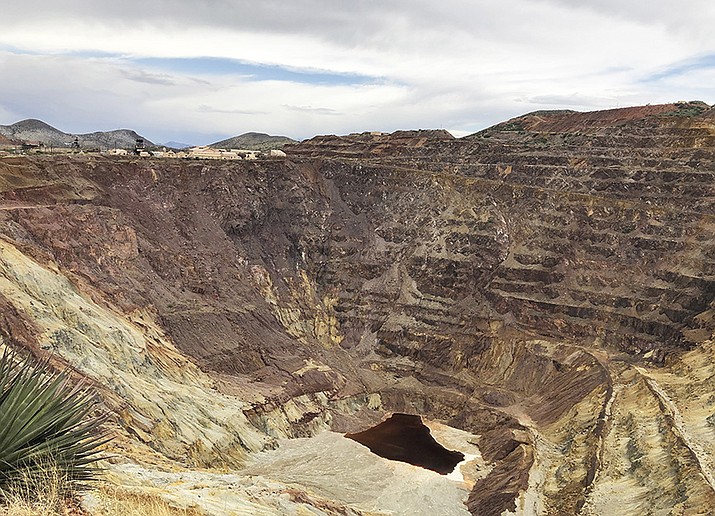 A May 12, 2019 photo, shows what's left of the Lavender pit mine outside Bisbee, Arizona, where the copper operation stopped in 1974. Forty-five years later, the pit remains a scar on the landscape, the layering made from potentially toxic mine tailings. A federal appeals court said the planned mine at Oak Flat does not interfere with Native American tribes ability to practice their religion. (AP Photo/Anita Snow)

PHOENIX —A planned mine at Oak Flat does not interfere with the ability of Native Americans to practice their religion, a federal appeals court has ruled.

In an extensive opinion, the 9th Circuit Court of Appeals acknowledged that the plans by Resolution Copper to build the mine on property that is being conveyed by the federal government would affect the ability of members of the Apache Tribe to perform religious services on the site. And they said it might even keep tribal members off the land.

But Judge Carlos Bea, writing for the 2-1 majority, said none of that violates the federal Religious Freedom Restoration Act because it does not interfere with their right to practice their religion. And what that means, he said is Apache Stronghold, a non-profit formed to preserve and protect American Indian sacred sites, has no legal basis for its lawsuit.

The decision by the court to not immediately enjoin mine construction drew a dissent from Judge Marsha Berzon. She said her colleagues were imposing an "overly restrictive'' test for determining the key issue in the case: whether the project imposes a "substantial burden'' on religious exercise.

In 2014, Congress directed the Secretary of Agriculture to convey 2,422 acres of federal land, including Oak Flat, to Resolution Copper in exchange for 5,344 acres of Arizona land owned by the company.

While Resolution Copper would not need to dig a mine on the surface, court records show the land over the mine eventually would subside, "profoundly and permanently altering'' the landscape.

There were some provisions put into the deal, including that there could be no mining on Apache Leap, with the goal of preserving the area's "natural character'' and "cultural and archeological resources'' and protecting the "traditional uses of the area by Native American people.''

Apache Stronghold sued, arguing it would interfere with religious services, like a Sunrise Dance held on Oak Flat — which the tribe calls Chi'chil Bildagoteel — in 2014. And that, its attorneys argued, violates the Religious Freedom Restoration Act.

That law says the federal government may not "substantially burden'' a person's sincere exercise of religion unless than burden is both "in furtherance of a compelling governmental interest'' and that it is "the least restrictive means of furthering that interest.'' And in this case, Apache Stronghold argued that the mine would make it "impossible'' to have religious exercise on Oak Flat, substantially burdening its members.

Bea, however, said even if that is true, it does not violate the federal law.

The first prong does not apply, Bea said, because the transfer of the property does not deny anyone any government benefits.

"The land exchange's incidental effects on the religious exercise of Apache Stronghold's members, as significant as they may be to the Apache, may make ti more difficult for them to practice their religion,'' he said. But Bea said it "will have no tendency to coerce the Apache into acting contrary to their religious beliefs.''

In fact, the judge said, that would be true even if the land exchange makes worship on Oak Flat impossible.

"The government makes exercises of religion more difficult all the time,'' Bea said. "Doing so is not inherently coercive,'' he said "The land exchange does not coerce the Apache to abandon their religion by threatening them with a negative outcome.''

The majority was no more sympathetic to arguments that the land exchange does in fact deprive its members of a benefit and subjects them to a penalty: They can no longer access government land for religious exercise and would subject to penalties for trespassing on private land.

But here, too, Bea said the government does not substantially burden religion every time it ends a government benefit that at one time went to religious beneficiaries.

"There must be an element of coercion: the government must condition the benefit upon conduct that would violate sincerely held religious beliefs,'' he said. And that, said Bea, is not occurring here.

And Bea also said that Apache Stronghold has not shown a "sufficiently realistic fear'' of future criminal liability or even that Resolution Copper might bring civil trespassing charges.

Wendeler Nosie Sr., founder of Apache Stronghold, said the ruling ignores the role of the site.

"Oak Flat is like Mount Sinai to use, our most sacred site where we connect with our Creator, our faith and our families,'' he said in a prepared statement. "It is a place of healing that has been sacred to us since long before Europeans arrived on this continent.''

An appeal will go to the Supreme Court.