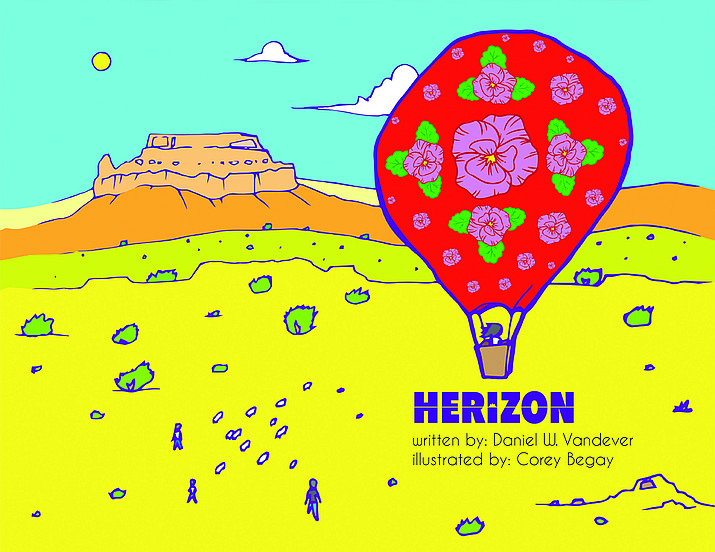 'Herizon' is a story of female empowerment and intergenerational strength. It details the journey of a Diné girl as she helps retrieve her grandmother’s sheep. ('Herizon' book illustration Corey Begay)

Award-winning author Daniel Vandever's new book, ‘Herizon,’ a wordless, children’s picture book, not only gives voice to the voiceless, it also is helping with reading comprehension through illustration.

“Herizon’ details the journey of a Diné girl as she helps retrieve her grandmother’s flock of sheep with the aid of a magical scarf. It is illustrated by Corey Begay, of Cedar Springs, Arizona, and is the recipient of the American Indian Literature Award for Best Picture Book announced Jan. 24.

This is Vandever’s first self-published book under South of Sunrise Creative. His other children’s book, ‘Fall in Line, Holden!’ was published by Salina Bookshelf in 2017.

Vandever wrote 'Herizon' for his nieces because he wanted a story that spoke to a brighter future for them, a future that was inclusive and spoke toward their individual identities as young females in the world.

“I think at the heart of what I wanted to do is (was) to write a story that spoke toward the strength that has been within my family, even to my grandmother (who passed away in 2019),” he said. “That is how we were raised. The book has some personal meaning on experiences growing up, herding sheep, from my grandmother, who was a weaver.”

Vandever has spent the past four years traveling to classrooms and interacting with students with his first book, ‘Fall in Line, Holden!’ During that time, he gave more than 45 readings at K-12 schools, colleges and bookstores, and traveled the country raising awareness about boarding school era education, identity and early literacy.

Vandever said his idea with 'Herizon' was to present a wordless children’s picture book, which could help with literacy for children.

“A wordless book holds that special place for those who often are intimidated by story time or circle time…these experiences that are supposed to be positive… it can be daunting for students who might not be at that level with their reading skills,” he said. “I really wanted to write this story for them.”

“People have their voices muted and are often told, along the lines of my first book, to fall in line and this is how you should act,” Vandever said. “I think a wordless book provides space for the individuality of (who) we are to come out and be celebrated.” 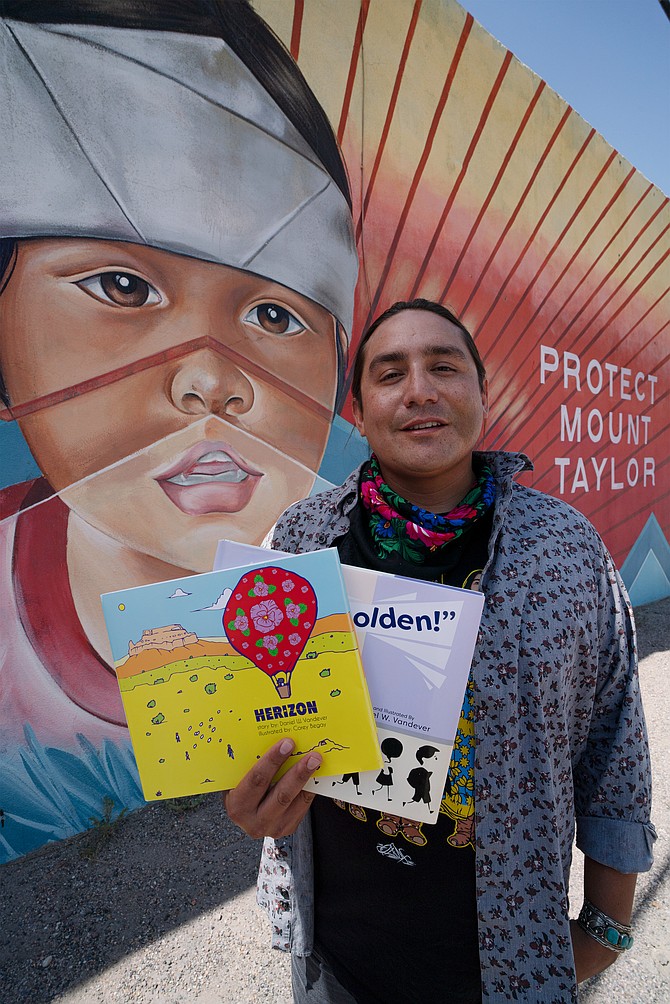 Vandever points out that especially in a time like today, with COVID-19 and distance learning, students and teachers can feel distant from one another. He said this book can allow teachers to get a glimpse into what a student values and their perspective on the world.

“Things like where they come from, how they interpret the world, all those things that help teachers meet students where they are and really individualize instructions,” he said. “A lot of that was designed on purpose, to be able to provide space where that type of learning could be recognized. I think it’s great because everyone has their unique experience toward how they interact with the story.”

Additionally, culture plays a big role in the book. Vandever said this was on purpose to allow people to make cultural connections, learn about histories, geographies, norms, customs, all things he thinks need to be discussed in an age of voice and representation.

“Which is great, given only one percent of children’s picture books published in 2018 represented a Native or First Nations character,” he said.

And that is also why he thinks self-publishing ‘Herizon’ was important — he was able to control the entire publication process, ensuring his community-based purpose was not compromised for alternative motives.

“The time for taking ownership of our voice is now. If I can be an example for others to be heard, I think my experience will be worth the effort. The horizon is bright for inclusive voices,” he said.

The book is able to share a story in this way by including details of life that Vandever thought was important.

“We really get an insight into sharing who we are as Navajos, Diné. which I think is just as important,” he said.

For those who are unfamiliar with Navajo culture or history, there is a QR code at the back of the book, along with explanations of what certain pictures, places or symbols mean.

“It’s inclusive,” Vandever said. “If, at the end of reading, somebody in the Midwest or in suburban cities, who doesn’t know the culture of raising sheep for sustaining livelihood, they can get that background… and it helps contribute to the overall knowledge of who we are and what we’re trying to do out here with these books. I think it was necessary in order to communicate the importance of this story.”

Additionally, the book speaks to larger issues Indigenous people continue to face today, like the Indian Child Welfare Act and Missing and Murdered Indigenous Women movement. Vandever said he wanted to bring awareness to some of these issues.

“These issues are very real in our communities and they aren’t really being addressed on the larger scale,” he said. “I think that’s another aspect of the book that I think brings power back toward our voice in our communities. It’s really opening up these different avenues where it has relevance and power to start conversations and maybe developing change around these very hot issues.”

More information about ‘Herizon’ is available at www.southofsunrisecreative.com/herizon.