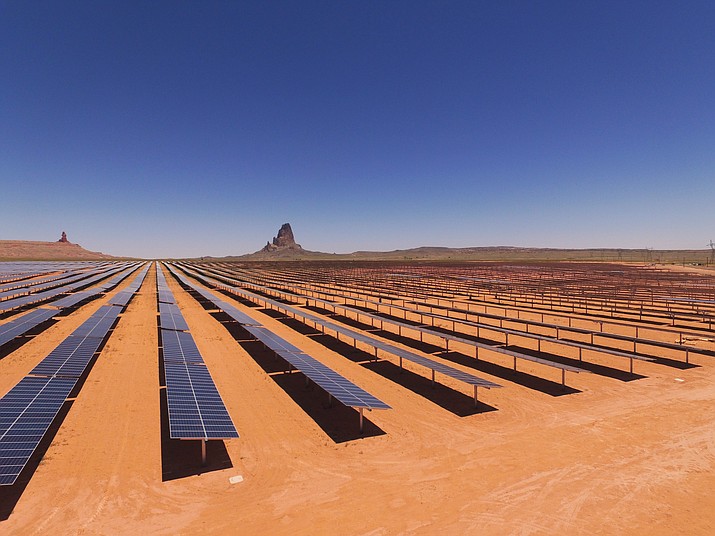 The Kayenta Solar Farm plans to double energy production to provide power to more homes on the Navajo Nation.

CAMERON, Ariz. — An Arizona utility has signed an agreement with the Navajo Nation to get solar power from a new facility on the reservation.

The Salt River Project and the Navajo Nation already had partnered on two other solar facilities in Kayenta that serve 28,500 homes and businesses on the reservation.

SRP and the tribe extended the agreement Jan. 20 on the initial Kayenta project that was was set to expire this week. The entities also signed a power purchase agreement for a new facility in Cameron, a tribal community on the route to the east entrance of Grand Canyon National Park.

Tribal lawmakers approved the lease for the Cameron Solar project last March. The solar plant is expected to produce 200 megawatts of energy for the Salt River Project. About 400 people will be employed during construction, and Navajos will be given preference for the jobs.

Another solar plant is in the works near the Arizona-Utah border in Red Mesa. That one will be owned by the Navajo Tribal Utility Authority and

The two solar plants in Kayenta together produce 55 megawatts of energy and employ six people, the tribal utility said. The tribe and SRP extended the agreement Jan. 20 for the initial project to 2038, more closely resembling the length of the agreement for the second Kayenta plant.

The solar plant in Cameron is expected to generate $11 million in land lease payments and $15 million in tax revenue for the tribe over 25 years. The Salt River Project also will purchase capacity on transmission lines that’s valued at $32 million over the project’s lifetime. The solar plant should be complete by the end of 2023.

Some revenue from the project will go toward connecting more Navajo homes to the power grid and keeping rates down for tribal customers, the tribal utility has said.

SRP said the Cameron plant will help it reach its goal of adding 2,025 megawatts of new utility-scale solar to its portfolio by 2025.