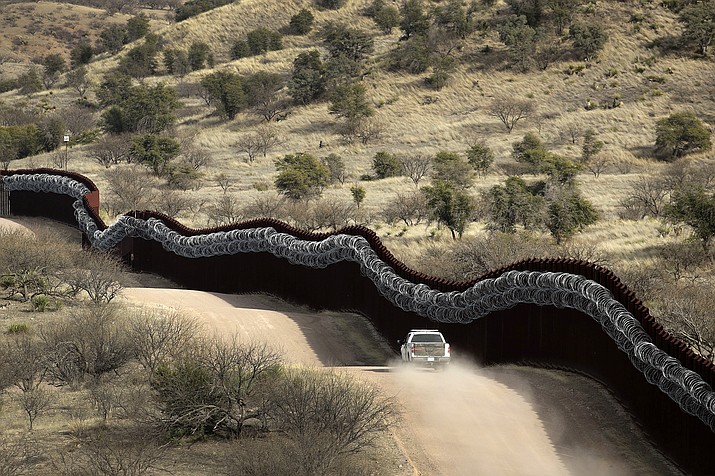 In this Aug. 22, 2019, file photo, U.S. Customs and Patrol agents sit along a section of the international border wall that runs through Organ Pipe National Monument in Lukeville, Ariz. A public-private project that maps the bodies of border crossers recovered from Arizona's inhospitable deserts, valleys and mountains said this week of Monday, Jan. 4, 2021 that it documented 227 such deaths in 2020, the highest in a decade following the hottest, driest summer in state history. (AP Photo/Matt York, File)

TUCSON, Ariz. (AP) — A Tohono O'odham woman was found not guilty Jan. 19 on federal misdemeanor charges stemming from her protest of border wall construction on her tribe's ancestral land.

The acquittal of Amber Ortega came after a magistrate judge reversed her previous ruling that Ortega couldn't use the Religious Freedom Restoration Act as her defense. After Ortega's lawyer asked the court to reconsider the ruling, the judge ultimately decided the prosecution imposed a substantial burden on her exercise of religion.

The Arizona Daily Star reported that Ortega spoke to supporters outside the federal courthouse in Tucson after the verdict was read.

"This is our land, and our ways are not wrong," Ortega said. "We, today, again defended our culture, our ways, our songs, our locations, our mountains, our sacred sites. Today was a victory for our people."

Ortega was charged with misdemeanors interfering with an agency function and violating a closure order after she refused to leave a construction site in September 2020 in Organ Pipe Cactus National Monument, about 150 miles southwest of Tucson, where contractors were building more than 40 miles of 30-foot-tall steel border wall.

The site, which was closed to the public, is about one-eighth of a mile from Quitobaquito Springs, an ancient watering hole that's sacred to the O'odham, where Ortega had been praying when she heard the construction vehicles and says she felt compelled to protect the land.