Robert Wick, champion of art, newspapers and community, dies at 86 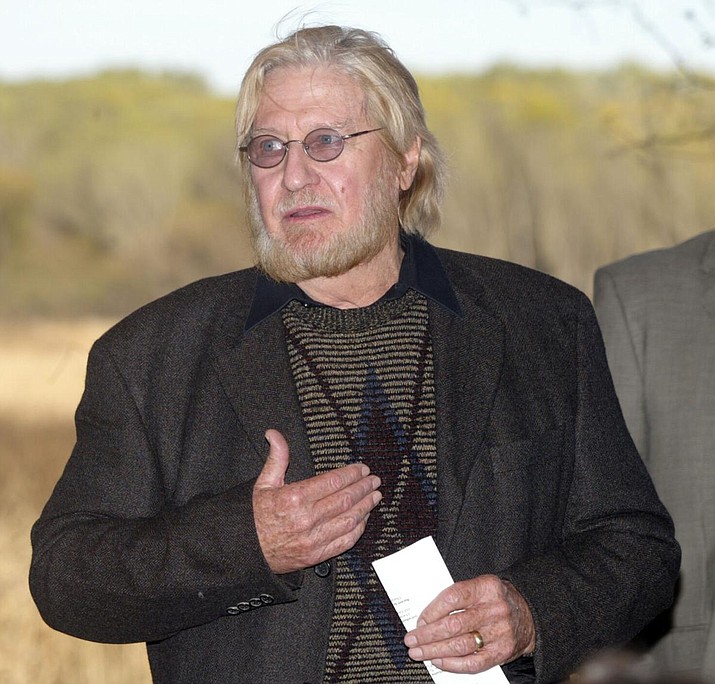 Wick Communications is a partner owner of River City Newspapers, which operates Today’s News-Herald in Lake Havasu City and the Parker Pioneer.

Soft-spoken yet pointed, Wick was as passionate about fighting a smelter operation in Douglas as he was about hand-watering thousands of seedlings he’d planted on his remote land in the Mule Mountains of Southeastern Arizona — the latter “a cathartic process which drew me more intensely to nature, its magic and wonder.”

Wick and his brother, Walter, purchased their uncle’s interest in Wick Communications in 1965, following his death. Their father, Milton Wick, and uncle, James Wick, founded the company when they acquired the family’s first newspaper in 1926 in Niles, Ohio.

Family members remain active in the business, with Robert’s son, Francis Wick, serving as president and CEO, and Walter’s daughter, Rebecca Rogers, serving on the board of directors.

Walter and Robert Wick assumed full ownership of the company, which expanded to 27 publications, in 1981, following the death of their father. Wick Communications, under their stewardship, today has holdings in 11 Western states, including Arizona, Washington, Oregon and Colorado.

In 1995, they entered into a partnership with Prescott-based Western News&Info, Inc., and owner of the Navajo-Hopi Observer, to create River City Newspapers, merging two newspapers in Lake Havasu City to create Today’s News-Herald.

“Bob’s passing hits my family and our company hard,” he said. “Bob was a kind, intelligent gentleman with a keen sense of humor. His family and ours partnered in Parker and Havasu in the mid-1990s. The Wicks have been a fantastic ally — and friends — the entire time largely due to Bob’s involvement. We’ll miss Bob. The Wick family is in our prayers during this difficult time”.

Robert and Walter Wick were inducted into the Arizona Newspapers Association Hall of Fame in 2004. Walter Wick died in 2016 of pancreatic cancer.

It was a family business and Robert Wick learned it by starting at the bottom. He and his brother swept floors around the newspaper office in Niles, Ohio, then worked in various departments learning the ropes.

He followed the family tradition and studied journalism at Kent State University, where he also played baseball and had dreams of playing professionally. At the same time, he was falling in love with art and discovered he had a talent for it.

He recounted his first serious venture into art in a 2019 newspaper article as he was preparing for an exhibit at the Tucson Botanical Gardens.

Wick said his aunt was visiting at Christmas during his junior year in college and she noticed him doodling with Play-Doh. “Sculpt a portrait of my husband,” she asked.

He said he couldn’t do it, but she insisted. He took photos of his uncle, then returned to school and asked the art department for guidance. They taught him how to make an armature, the framework for a sculpture, and he got to work.

“It came out better than anything in the class,” he said. “I was so dumbfounded, I didn’t realize I had this in me.”

It shouldn’t have come as a surprise. At age 5, “my father taught me to draw with volume,” he said. “In the first grade I was drawing with three dimensions, and by the fourth grade I was conscious of Frank Lloyd Wright and was trying to design ‘futuristic architecture.’ ”

In his teens, he put art aside until rediscovering it in college.

Wick earned a bachelor’s degrees in journalism and fine arts from Kent State University and a master of fine arts from Cranbrook Academy of Art in Bloomfield Hills, Michigan, one of the top art schools in the nation.

He went on to teach sculpture and drawing at Kent State and at the State University of New York, Fredonia. He and Walter Wick opened the Wick Poetry Center at Kent State in 1984 in memory of their sons.

Robert's 17-year-old son Stanley was killed by a drunk driver on June 30, 1980. In a tragic coincidence, Stanley’s death came seven years to the day after Tom Wick, the son of Walt, was also killed in a car accident.

For more than 50 years, Wick used a combination of bronze sculptures infused with living plants to convey his message of our oneness with the Earth. He’d first experimented with plants in art in the late '60s.

“I placed a piece of ivy in the split,” he said of a mask he was making. “I saw the ivy as a sign of creativity, others saw it as death, others as life. I liked the way it created another layer of meaning to the head, the work of art. From that point on, I could not consider creating sculptures without living plants, trees or vegetation of some kind.”

The technique turned heads in the art world, and he exhibited, among other places, at the Cleveland Museum of Art, Akron Art Museum, Austin Museum of Art and Tucson Museum of Art. But his favorite place was showing his art in botanical gardens “because of the settings and marvelous plant life. The sculptures truly appear to belong in such environments with the trees and plants growing from the sculpture.”

“We tend to think of evolution as biological, but it’s a process toward greater complexity,” he said. “This art is trying to show that we are connected to nature, and we need to know that, be conscious of it, and what that means for us.”

But art never crowded out the journalist in him. He found himself producing the editorial pages for the Williston (N.D.) Herald in the 1960s, and in the ’80s was instrumental in shutting down the Phelps Dodge smelter in Douglas and limiting the expansion of the smelter in nearby Cananea, Mexico. He also pushed to lower by 90% the sulfur dioxide output at a new smelter in Nacosari, Mexico.

“We were able to change Southern Arizona skies to the cleanest in 100 years,” he said. “It would have been the most heavily polluted landscape in North America without these changes.”