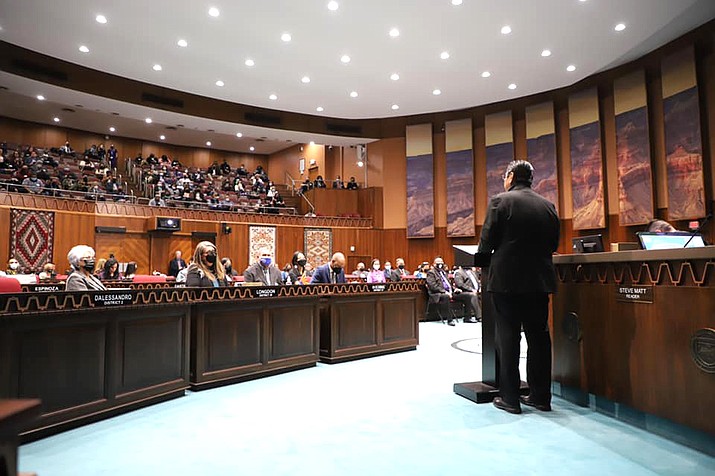 “The Navajo Nation continues to meet with Arizona state leaders to share the priorities of the Navajo people, especially during this pandemic,” said Council Delegate Carl Slater. “It is important we maintain the government-to-government relationship when making decisions that will impact the future of Arizona’s 22 Tribal Nations.

On Jan. 10, State Senator Theresa Hatathlie (D-Dist. 7) from the Coal Mine Mesa Chapter was officially sworn into office by the Arizona Legislature. She replaces former Arizona Senator Jamescita Peshlakai, who resigned in December to take a position with the U.S. Department of Interior.

A personal meeting between Navajo leaders and Hatathlie was scheduled for Jan. 13, alongside Representative Jasmine Blackwater-Nygren (D-Dist. 7), and Rep. Myron Tsosie (D-Dist. 7).

“Western Navajo Chapters are the tourism and commerce hub of the southwest to the Grand Canyon and we welcome millions of visitors each year to our tribal parks like Canyon De Chelly, Monument Valley, Horseshoe Bend, or Antelope Canyon,” said Council Delegate Paul Begay. “It is clear the lack of water resources and infrastructure development in many Navajo rural areas is limiting our ability to support businesses and construct new grocery stores, gas stations, or hotels. The pandemic with the closure of the Navajo Generating Station has hit the Navajo Nation hard economically. To recover, we must prepare for future water shortages and uphold the water rights of the Navajo people. That will allow us to thrive and live.”

In November, President Joe Biden signed a $1.2 trillion infrastructure bill that will provide around $8 billion to Arizona to upgrade outdated roads, bridges, transit systems, invest in broadband initiatives, and more. With a projected state surplus for additional funding, the Navajo Nation Council advocated for various infrastructure opportunities available for the largest tribe in Arizona.

Nez spoke about the contributions and resilience of Navajo people during the COVID-19 pandemic and throughout society. He also urged state lawmakers to support the voting rights of Native American people and the ICWA, while highlighting the progress of infrastructure development and access to clean water on the Navajo Nation.

“Throughout this pandemic, just as our elders did long ago during times of adversity, our Navajo people continue to step up and demonstrate the strength and resilience of our ancestors. We continue to use our way of life teachings, the teachings of our elders, to push back on COVID-19,” he said.

In regards to the closure of the Navajo Generating Station and Kayenta Mine, Nez called on state leaders to submit letters to the Arizona Corporation Commission in support of Coal Community Transition funding for the Navajo Nation. He also requested the support of the State Legislature to pass an ICWA bill to support tribes in custody matters involving children who are enrolled members of our tribes.