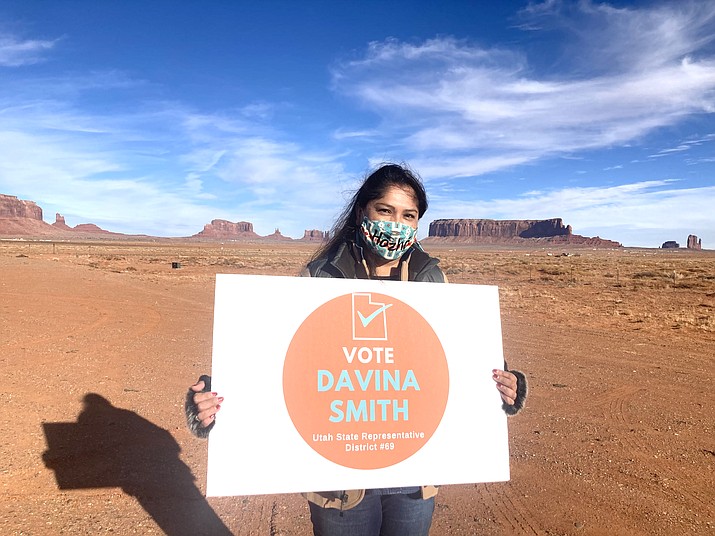 MONUMENT VALLEY, UT. — When Davina Smith mounted her horse Oreo on Thursday afternoon, the sun was shining on the iconic, burnt red buttes of Monument Valley, but the wind chill hovered near freezing.

Smith, her father Roy and other members of her family joined her at the horse corral on the Navajo Nation where Smith’s umbilical cord was buried the day she was born. Then they rode to the Monument Valley Welcome Center.

With the Monument Valley and Bears Ears buttes as a backdrop, Smith — a Democrat — stood before a crowd of supporters and announced her candidacy for the Utah House of Representatives, making her the first Diné (Navajo) woman to run for the state Legislature in Utah’s 125-year history.

“We were taught as Diné people,” Smith said, “our umbilical cords are buried as a baby by our mothers [in a place] where we know we will return. I have returned.”

The hourlong journey on horseback was connected to a longer journey, Smith explained, that she has been on throughout her careers in health care, education, economic development and advocacy work, including the campaigns to protect Bears Ears and Grand Staircase-Escalante national monuments in southern Utah.

“Since I was a little girl,” she said, “I’ve experienced so many journeys in my life, whether they were traumatic, whether they were celebrations. But I took every journey with the mindset of, ‘What is it teaching me?’ … We have an ancestral historical past of resiliency.”

The rest of this story can be read here from the Salt Lake Tribune.