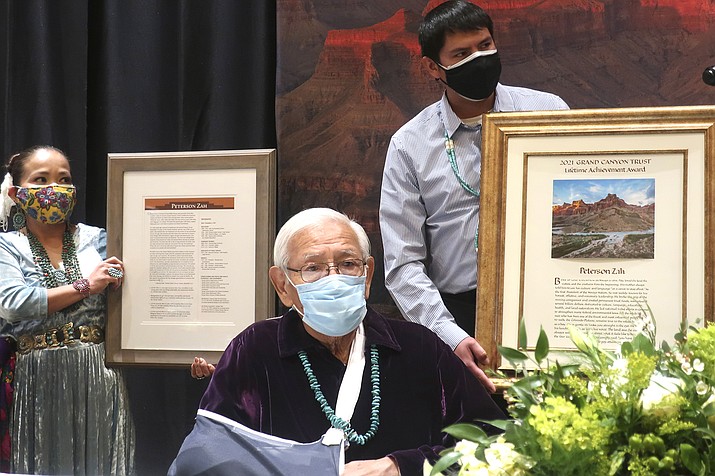 TWIN ARROWS, Ariz. (AP) — Peterson Zah has never claimed to be an extraordinary Navajo, just a Navajo with extraordinary experiences.

Those who gathered Jan. 11 to honor the former Navajo chairman and president at a tribal casino east of Flagstaff disagreed. They said Zah has worked tirelessly to promote the Navajo culture and language, inspire youth, strengthen tribal sovereignty, provide more economic security for the tribe and ensure that Native Americans everywhere had certain religious freedoms and were included as part of federal environmental laws.

"The extraordinary experiences that you have had came about because you continually push yourself to learn, to grow and to do literally whatever it takes to promote the Navajo people and the Navajo Nation," said Zah's longtime friend, Eric Eberhard, who worked in the tribe's Department of Justice.

Zah was receiving a lifetime achievement award from the Flagstaff-based environmental group, the Grand Canyon Trust. The award acknowledged Zah's love of the land, waters and all living things — values he said he carried on from his mother's teachings. 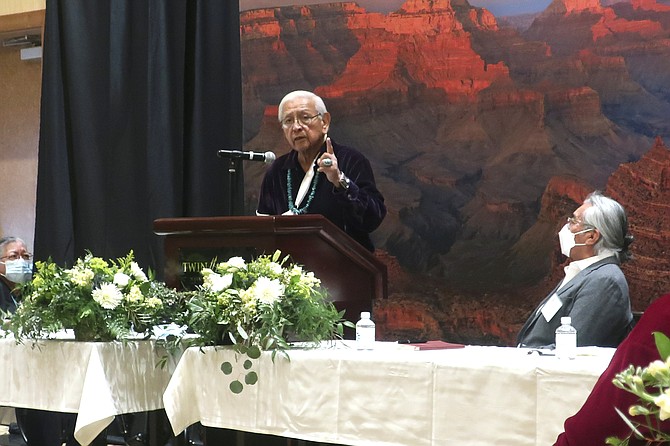 "He is gentle. He looks you straight in the eye. He talks with his hands as much as with his voice," the group's board chairman, Jim Enote, read off the award. "The land and the culture are always with him."

Zah was the first president elected on the Navajo Nation in 1990 after the tribe restructured its government under three branches to prevent power from being concentrated in the chairman's office. He later served as the Native American liaison to the Arizona State University president, a position he held for 15 years.

Concerned about the state of politics on the Navajo Nation, Zah turned his attention to finding ways to help Navajos return to basic cultural teachings of harmony, peace and respect for themselves and others.

Zah, 84, told The Associated Press that as long as people live in peace and respect each other's differences, they can maintain beauty and make the world better for future generations. He struggled to name the thing he's most proud of.

"It's hard for me to prioritize in that order," he said after the award ceremony. "It's something I enjoy doing all my life. People have passion, we're born with that, plus a purpose in life."

Zah said it's work he couldn't have done alone and credited team efforts that always include his wife, Rosalind. He said he took seriously the responsibility to educate others to correct wrongdoings against Indigenous people.

Under Zah's leadership, the tribe established a Permanent Fund that's grown to more than $4 billion. The Navajo Nation won a court battle against Kerr McGee decades ago that found the tribe had authority to tax companies that extract minerals from the reservation. All coal, pipeline, oil and gas leases were renegotiated, which increased payments to the tribe. A portion of that money is added annually to the Permanent Fund.

Zah has fiercely advocated against Navajo lawmakers raiding the money over the years. He and his wife are still active in politics, and Navajo leaders routinely turn to Zah for advice.

Charles Wilkinson, a longtime friend and lawyer, said Zah was at one time known as the Native American Robert Kennedy "because he had charisma and he had ideas and he was getting things done." That included an effort to ensure Native Americans could use peyote as a religious sacrament.

Karletta Chief recalled Zah's work pushing to clean up the hundreds of abandoned uranium mine sites on the reservation, and ensuring that tribes were part of the Clean Water Act, the Clean Air Act and other federal laws that are vital to her work as a hydrologist.

"All that really inspired me in my journey because I grew up in a community impacted by coal in Black Mesa," said Chief, an associate professor at the University of Arizona.