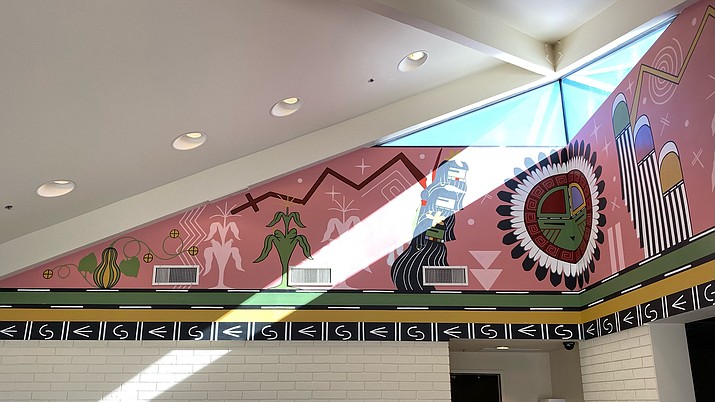 A mural titled 'Hopi Life' can now be seen at the Verde Valley Archaeology Center in Camp Verde, Arizona. The mural conveys important elements of the life of Hopi people and together, the representations share a look into the deeply held values and traditional practices and teachings that bind Hopi culture. (Photo and artwork courtesy of Duane Koyawena)

The Verde Valley Archaeology Center reopened at its new location as contractors, artists and volunteers create a new museum with artifacts, art and history about local Native Americans.

Currently, the museum is open Friday, Saturday and Sunday from noon to 4 p.m.,with free admission through January.

The museum will be completely finished next year, but the public will get a sneak peek of murals being completed and exhibits and displays going up, according to Monica Buckle, deputy museum director.

Duane Koyawena, who painted the mural ‘Hopi Life,’ which is now on display at the center, said the mural conveys important elements of Hopi lives. An artist statement about the mural hangs at the museum.

“Together these representations share a look into the deeply held values and traditional practices and teachings that tie us together as Hopi,” Koyawena said in a recent Facebook post.

Koyawena explained that in the center of the mural is the representation of the sun.

“Our Father, Tewa,” Koyawena said. “We pray to Tewa for strength and look to him as a guiding force within our lives.”

Koyawena said the stars in the background show the outer world and the greater galaxy.

“Stars play a significant part of our lives as it relates to the passage of time,” he said.

Below, the bands of color represent male and female, while the white daisy’s represent moisture.

The black and white designs at the bottom are a representation of Paalölöqang. Paalölöqang is a water serpent that keeps the world in balance.

“In Hopi, Qatsi, this is the way of life we strive for. It is said that if people do not take care of the earth, it will get mad and shake the earth to its core,” Koyawena said.

The deities to the left are Angaktsinam, longhair katsinam. As rain messengers, they are associated with moisture and rain. As clouds themselves, they are also depicted to the right as tall cumulus clouds with black and white vertical lines signifying rain.

The lightning (talwiipiki), in both yellow in red, is representative of the way it is described in traditional songs.

“Moisture is essential for life. Representations of this are found throughout, such as the clouds, lighting and dragonflies,” he said. “It sustains our crops, natwani, like the squash and corn that are shown. Interconnected, as stewards of the land, our life way is dependent on our dedication to traditional farming. The fruits of this important duty, in turn, allow us to provide for our people.”

Other facts about the archaeology center

The museum’s exhibit on the Yavapai-Apache Nation will also be expanded in the new museum space.

“The new facility features: twelve public gallery spaces, lobby reception and gift shop, state-of-the-art meeting and events room, a virtual interactive children’s adventure room, a collections repository, curation laboratory and data center, a human remains room (for the safe keeping of remains prior to Tribal consultation), board room and staff offices, and a library for VVAC members consisting of over 2,000 books, periodicals and DVDs,” the organization explained.

VVAC was founded in 2010 to further promote its mission of conservation, preservation and education for the Native American heritage and archaeology of the Verde Valley. The museum is also intended to be a destination for visitors.

The VVAC purchased the former Verde Valley Medical Center building at 60 Finnie Flat Road in the Verde Village shopping plaza in July because it needed more space for its collections and exhibitions than it had at its former location.

The new 1.2-acre property includes an 11,000-square-foot building with parking to accommodate around 50 cars.

The building cost $1.25 million, and the renovations are $500,000, said Ken Zoll, director of the museum, on Friday. There will be curation space for storage of artifacts, museum space classroom, research lab and offices.

“Yavapai-Apache and Hopi are the current residing tribes, but we’re covering a multiple of prehistoric material,” Zoll said.

The building itself will be done by the middle of December, but they are running into supply-chain issues with the delivery display cases.

“Everything probably won’t be done until March 1,” he said.

More displays will come up in January, February and March.

There will also be a meteor exhibit courtesy of Arizona State University on display at the museum.