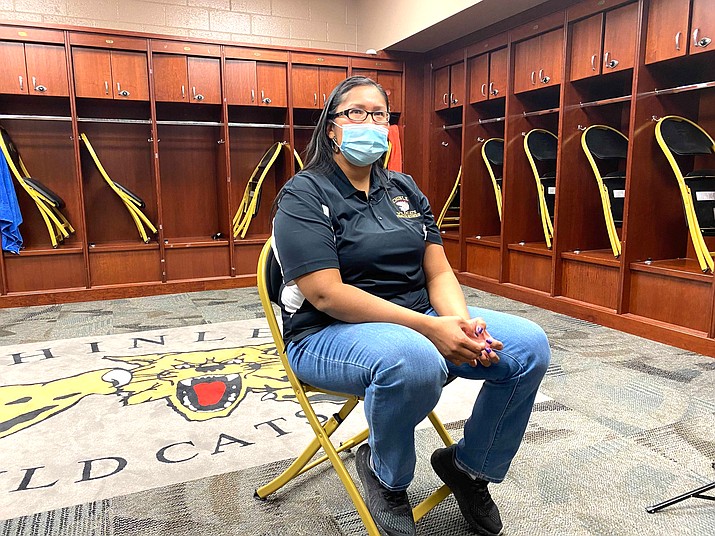 CHINLE, Ariz. — Roughly 300 miles north of Phoenix, tucked behind the majestic Canyon De Chelly, sits Chinle in the heart of the Navajo Nation. A lone central two-lane highway leads in and out of the town. Surrounded by dirt, mountains and desert, the paved road is rare.

Signs hang along fences, warning against the spread of COVID-19. Aging buildings face east to celebrate the sunrise and rebirth of a new day, much the way the homes of their ancestors did for generations. The Wildcat Den at Chinle High School is arguably the largest one in town, the 7,500-seat arena that is home to Chinle basketball.

It sat idle from March 2020 to November 18 while the city was on lockdown due to COVID-19.

The pandemic was hard on the community.

Both are working to find peace in their grief, while helping the community heal through basketball.

This is part II of this story, to read part I, visit www.nhonews.com.

They are warriors because their normal lives would be challenging to others. Ashley is one of a few returners coming off the pandemic year. She commutes at least an hour and a half roundtrip every day from her home in Tsaile.

Throw in a global pandemic, and missing her entire junior season, and many would expect her to struggle. Yet during quarantine, the senior captain trained in the desert and – spoiler alert – dominated in her first game back.

“I just have my dirt court,” Ashley said. “My dad recently got me a squat rack (for weightlifting) over quarantine to do and I just ran all over Tsaile.”

Kylen lives close to the school in teacher housing with McCurtain and his four younger siblings. Two years ago, he was featured in the Netflix documentary “Basketball Or Nothing,” which documented the men’s basketball team just before the pandemic hit.

“There’s a lot of hardships out here on the Navajo Nation that’s not seen up in the cities,” he said. “The basketball culture that we have down here is bigger than people think.”

Kylen and Ashley left the court in March 2020 as sophomores, and are returning as seniors expected to lead their young and inexperienced teams while healing their community through basketball.

“It’s a school, it’s a hospital, I don’t want to say it’s a church, but a place of healing,” Martin said. “Getting back to the season is how we move forward. The community needs it.”

The two are using basketball as a means to fulfill educational dreams, the way Martin hopes all students will.

“It’s easy for us, because we as native people are very resilient and have overcome enormous traumas in the past,” he said.

Those traumas date back as early as the 1500s, when Spanish explorers began encroaching on Navajo land. In January 1805, Spanish troops attacked the Navajo Nation at the Battle of Canyon De Chelly to retaliate against the Navajo for their defense attacks against a Spanish military post. Numerous tribe members were murdered and forced to retreat to the aptly named Massacre Cave.

The Dawes Act passed in 1887 was a redistribution of land to Native people “aimed to assimilate Native Americans into mainstream U.S. society by encouraging them towards farming and agriculture,” according to the U.S. government’s National Park Service. Instead, it stripped over 90 million acres of tribal land from Native Americans. The Act weakened traditional tribal dynamics, and forced many Natives into a life driven by poverty and disease.

Perseverance has long been demanded of this community

“Having our kids get on a bus at 5:30 in the morning, 70 miles up the road, just to get here in the morning to go to school, builds resilience,” Martin said. “In a home with no electricity, and maybe five other siblings and grandma and grandpa living there. They have to feed the livestock and then chop wood for warmth, before they sit down and feed themselves, as a 10-year-old. That builds resilience.”

Chinle loves hosting non-native teams, as it did on this night welcoming in Show Low High School, a public school located 154 miles south of Chinle.

“Show Low needs a facility like this,” one Show Low coach said, eyeing the giant scoreboard hanging high about the court.

The Wildcat Den is believed to be the 14th largest gym in the country, with 12 of the others located in Indiana.

It is shaped like a hogan – the traditional dwelling of the Navajo people – with doors facing east to welcome in sunlight, the rebirth of a new day. Each part of the Wildcat Den has a spiritual message. From paintings of Canyon De Chelly on each side of the basketball court to the wildcat in a small circle on the side of stands, it was planned with purpose.

“There’s this very cyclical life viewpoint of everything,” Martin said. “The entire universe can be related to that way of thinking.”

Navajo traditions preach living in a Matriarchal society, where family lineage is passed down through the mother, rather than the father. The woman is the head of the family, and clans extend far beyond their direct household bloodlines.

“You are your mother’s clan first, then your father’s clan,” Martin said.

Children call fellow clan members their “aunties” and “uncles.” If they are lucky, similar clans will live near and they will gather together often. But like everywhere, COVID-19 made it nearly impossible to have larger family gatherings without it becoming a petri dish for the virus to spread aggressively.

The Wildcat Den allows clans to celebrate together once again, only now under strict social distancing and mask-wearing protocols. The Den remains a tool to teach non-native people their ways of life.

And it doesn’t end, because preservation, much like time, is cyclical.